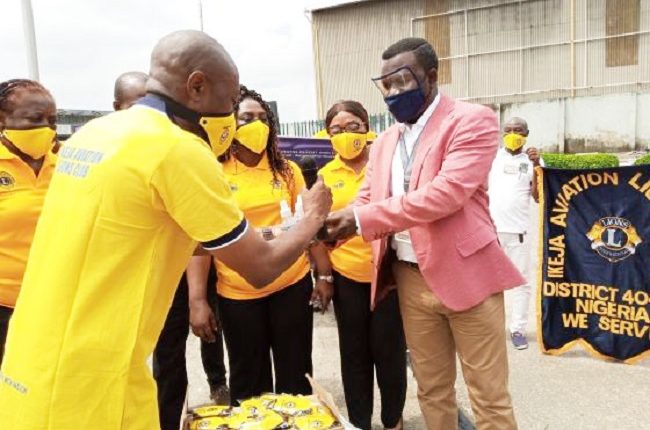 Members of the Ikeja Aviation Lions Club have distributed items aimed at preventing the COVID-19 pandemic to passengers and workers at the General Aviation Terminal of the Murtala Mohammed airport, Ikeja, with a plea to continue observing social distancing.

Members of the Ikeja Aviation Lions Club led by the president, Mr AbdulRahman Musa, while distributing hand sanitizers, and nose masks to air passengers and workers at the airport terminal, said it was their own little way of contributing to help create more awareness in preventing the spread of COVID-19

Musa while pleading with travelers to always maintain social distancing at the airports and other places said it was a passing phase as the pandemic will not leave the people especially when all protocols were observed.

He disclosed that the distribution of the hand sanitizers and face masks was part of the Lions Club’s monthly activity in the series of events lined up for the one calendar year, adding that they were out to  improve the lives of people especially the elderly and the less privileged around their zone through humanitarian activities.

The terminal manager of the GAT, Mr Aderigbibe Adekunle, who received the items before members of the Ikeja Aviation Lions Club commenced the distributions, expressed joy and commended the club for their humanitarian service.

Adekunle who described it as a welcome development said it would help in preventing the spread of the Coronavirus even as he urged other bodies to emulate the club’s gesture.