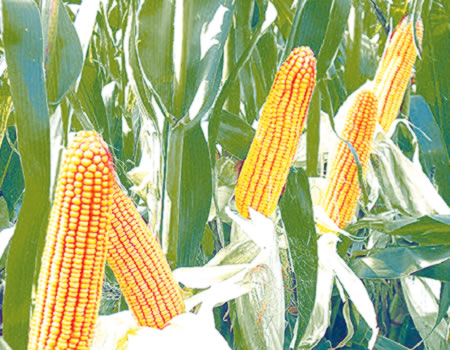 THE International Institute of Tropical Agriculture (IITA) and Harvest Field industries on Monday sensitised farmers on Aflasafe which is a chemical used to control aflatoxin which contaminates Maize and groundnut while in the farm.

Aflatoxin is fungi which grow alongside crops especially maize and groundnut in the field and subsequently contaminate the crop. Crops affected by aflatoxin, consumed, the consumer may suffer from severe kidney or liver problem.

As a result of this, Nigerian maize and groundnut have lost international value, as countries reject the crops. Locally, breweries, poultry farmers and fish farmers are currently rejecting some maize which was believed to be contaminated with aflatoxin.

It is at this backdrop that IITA embarked on researches to find a permanent solution to this economic problem, and Aflasafe was developed and deployed across West Africa, Central and East Africa and it has been certified to tackle aflatoxin.

During the sensitization on Aflasafe in Abuja, the Commercialization Manager for Aflasafe, Peter Okomoh said for over 10 years, IITA worked with partners to produce the Aflasafe which it has deployed across Africa.

“IITA is basically focused on research for development, part of that also means that whatever research that we conduct at IIAT has to address fundamental development on issues like health and nutrition, food security.

“Aflatoxin has been one of the major problems that we are having not just in Nigeria but across Africa and it is as a result of how we are situated along the equator, climate change also has not really helped over the last couple of years, and we have seen incidences of aflatoxin in areas where hitherto there were no real cases of aflatoxin.

ALSO READ: With more funding we can do much more better — Provost, Federal College of Agriculture, Ibadan(Opens in a new browser tab)

“So, over ten years ago, IITA working with partners, decided to look for a solution to aflatoxin contamination in Africa, and that’s when the Aflasafe technology was introduced, and over time the technology has been tested not just in Nigeria, but in several other countries and it has been found to be very safe and that’s why the National Agency for Food Drugs Administration and Control (NAFDAC) formally registered Aflasafe for use in Nigeria and we equally had it registered in other countries, Burkina Faso, Ghana, Gambia, Senegal and in West Africa, we are equally extending it to other countries like Mali, in East Africa, also in Kenya, Tanzania is equally registered, we are really working to make sure that the technology is available across Africa for aflatoxin control,” Okomoh said.

On the commercialisation of the technology, Okomoh said “IITA is not really a commercial entity, so if we are trying to commercialise the technology, we have to look for appropriate partner who has the financial muscle, who has the expertise that also has the expertise to make sure that they use their resources to make the products available, so that’s the role that Harvest Field industry will be playing, making sure that the set up the plants to produce and also to distribute, IITA still owns the patent for the product which means we still have to provide that oversight function to ensure that the quality is always consistent.”

Martins Awofisayo, Managing Director/CEO of Harvest Field Industries explained that when the Aflasafe is sprayed on the farm after 3 weeks of planting, it reduces the growth of the fungi so that it will not contaminate the crops.

“Aflasafe is a biocontrol agent that controls aflatoxin in Maize, groundnut and sesame, and aflatoxin reduces the exportable of the product from Nigeria, because that is what has been stopping our Maize and groundnut from being exported, that is why we cannot have groundnut pyramid again, but with Aflasafe now that will reduce the aflatoxin level in those major products (Maize and groundnut), Nigeria can come back to the export market,” he added.

Jame Kolo who is Zonal Coordinator Maize Association of Nigeria (MAAN), North Central, while commending the production of Aflasafe, lamented that they have over 10,000 metric ton of maize which is unsold due to contamination from aflatoxin.

“For some time now, we have been having this challenge seriously because when we produce Maize, the poultry farmers, the fish farmers and even the breweries complain that the Maize we produce has high concentrate of aflatoxin, and even the Maize we produce we are very sure that since last year cannot be consumed all by Nigerians, we expect that by now, we will be exporting Maize to other countries, but as a result of this aflatoxin, we have not been able to export.

“As at now, we have on ground from last year Anchor Borrower program over 10,000 metric tons of Maize that have been returned as payment by farmers but we have not been able to sell it, but with this Aflasafe that has been developed to tackle aflatoxin, I think this is going to help farmers because we will be able to sell Maize that we produce locally and internationally,” Kolo said.

Representing the Permanent Secretary, Ministry of Agriculture and Rural Development, Dr Mufutau Adeleke said “the Federal Ministry of Agriculture has been fighting to make sure that our commodities are not rejected both domestically and internationally, reason is that we want to be self-sufficient and at the same time be able to make agriculture products to replace oil, so in doing that all the factors that are limiting our growth in that have been identified and we are pursuing it.

“What we want our farmers to know is that Aflasafe is not Fertiliser, but it is one of the important production inputs, that is used, when you produce your grain, especially Maize and groundnuts will not be rejected and will be aflatoxin free and when it is aflatoxin-free, it will command high prices.”