Igbajo: Beyond the Kiriji peace treaty

by Tribune Online
in The South West
Reading Time: 9 mins read
A A

A town whose history specially connected with about 10 other Yoruba towns is Igbajo in Osun State. TUNDE BUSARI writes on other peculiarities of the town.

Not a few Yoruba people know Igbajo, an ancient town in Osun State, beyond its role in the historic Kiriji War that visibly rocked and shaped the history of the Yoruba nation in the 19th Century.

Nigerian Tribune gathered that the ancient town of Igbajo provided the terrain and camp for the Latoosa-led Ibadan combatants against the allied forces of Ijesa and Ekiti in the decisive war which came to an end after the peace treaty signed on September 23, 1886.

Further findings revealed that Igbajo was the only town in history where ten kings had a stop-over on the top of a rock before they dispersed and went to establish their respective towns and communities. The kings included the Orangun of Ila; Ajero of Ijero-Ekiti; Alara of Aramoko; Owa of Otan Ayegbaju; Olojudo of Ido-Ekiti; Owalare of Ilare; Onire of Ire-Ekiti; Oloore of Otun-Ekiti and the Owa of Igbajo.

Till date, the site where the said royal fathers converged is preserved some metres away from the palace of the Owa of Igbajo, Oba Adeniyi Olufemi Fasade.

Though the historic spot is kept under lock and key, it is open to tourism-inclined visitors to the town. The Osun State government has officially also categorised the site as one of tourists destinations in the state as evident in the signpost erected on top of the rock.

‘Our pairing responsible for early eviction’

Beyond the government approval from the obvious signpost, it does not seem like much has been done to promote the tourism opportunities the site represents. For instance, even residents and indigenes of the town seem unaware that such history dwells within their domain.

However, for the Owa of Igbajo, who did not allow the opportunity to promote the tourist site slip, the monarch impressed upon his guests the historical significance of Igbajo to the aforementioned towns in particular and Yoruba nation in general.

According to the monarch, when the founder of Igbajo, known in history as Akeran, left Ile-Ife, he did not leave alone. He left with other sons of Oduduwa after Owa had gone in search of the Atlantic water prescribed to heal the blindness of Oduduwa, their father.

The site called Okuta Mewa (ten rocks) was the spot where those, who later founded different towns, paused during the journey from Ile-Ife.

“Each of them sat on one rock, hence the name ‘okuta mewa’ (ten rocks) to symbolise the event. They sat, discussed and later dispersed to different directions and locations where they are today. It can safely be said that Akeran was their host because of the fact that he settled where they converged. Let us now think of it. Do you think it is common to have the kind of privilege that we have?

“How many towns in Yorubaland had the opportunity to host ten kings on their way to establishing their respective towns? What should this tell you about the importance and relevance of Igbajo to the Yoruba nation? That we are not known for showing off does not mean such significant piece of history is not here. And such history cannot be changed,” Oba Fasade enthused while speaking with Nigerian Tribune in his palace.

On account of its strategic location as regards to its accessibility, Igbajo became the meeting point and indeed safe haven for many Yoruba families who were victims of war or internal discontent in their respective towns and communities.

To this end, Igbajo, today, is an amalgam of sub-ethnic groups such as Ife, Ijesa, Igbomina, Oyo and Ekiti. This is also a peculiar feature from which the Owa of Igbajo takes pride, having seen its potential of making his town celebrated.

Given this factor, it is not unusual to see an Igbajo native easily adjusting to the dialect of any of the five towns, an act not common among indigenes of other Yoruba towns.

In terms of the administration of Igbajo, the kingmakers in charge of the selection of the Owa of Igbajo, are drawn from the five towns in a show of assimilation which has promoted peaceful coexistence among the people.

Evidence of this is seen in the strength of the Igbajo Development Association (IDA), a group of sons and daughters of Igbajo, which has since undertaken community development projects, including what can ‘arguably’ be referred to as the first private polytechnic in Nigeria.

The Igbajo Polytechnic today is said to have had many of its products holding higher positions in the country and beyond the shores of Nigeria.

The Iyalode of Igbajo, Chief (Mrs) Adebowale Bimpe, said the polytechnic remains the pride of Igbajo indigenes, because, according to her, it came from the collective sweat of the people. The polytechnic, she stressed, represents the determination of the people to take their destiny into their hands before seeking the face of government. 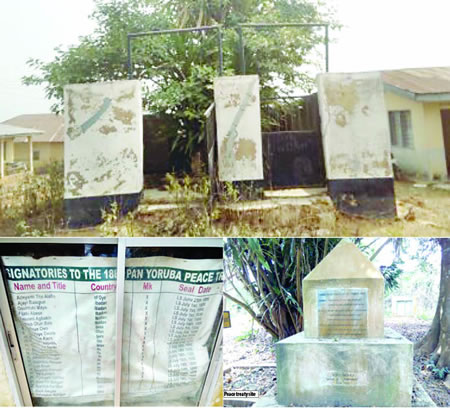 While acknowledging the supremacy of government, Iyalode awarded the credit of nurturing the polytechnic to fruition to Igbajo kith and kin.

“It is our own contribution to the development of our town, in the area of education. Igbajo is noted for producing professors and doctors, so having a higher institution should not be a big deal. And we are happy that the school is doing well,” she said.

An extensive tour of Igbajo revealed other places of interest, including the Oroke Shrine which hosts the annual Oroke Festival holding in May. The festival, it was learnt, brings together the ruling houses with a view to celebrating their progenitors by killing a cow which is shared among them under a lively atmosphere.

Members of the royal families are accompanied to the shrine by drummers who spice up the occasion with music and panegyrics in a spectacle that provokes nostalgia of Igbajo of old.

The chief priest, who doubles as the Odofin Iloro of Igbajo, Chief E.A. Oladejo led Nigerian Tribune round the shrine, an old relic, inside which such needed sacrifices were made. The heavily-built Oladejo declared that an Igbajo native does not joke with the festival because of its cultural significance to the people.

The high chief frowned at the critics who referred to such festivals as promotion of idolatry, noting that the festival was purely a cultural observation.

“What we do here is to remember our forefathers who played a critical role in founding the town and made it what it is today. There is no today without yesterday. And tomorrow also lies in today because without today tomorrow will only exist in a dream.

“What I am saying is that Oroke Festival, which is a major festival in the town that attracts crowds of people, is our heritage which we are doing our best to preserve. And we shall continue to preserve it for the future generation to see. It may interest you to know that somebody has done his doctorate thesis on this festival. This is to tell you about its place in our culture here,” he said.

The Kiriji War theatre on the outskirts of Igbajo appears more or less a sacred entity in its entirety. It is now a farmland, but its hilly terrain, according to the Oluode of Igbajo, Chief Adeolu Oluborode, revealed the native power with which the warriors on both sides prosecuted the war. In the recent past, relics of war implements were still found in the axis.

The spots where major incidents occurred during the war still lay in the tropical forest. Faragbota tree, the thick said to have absorbed thousands of bullets, still stands erected on its spot. It was, however, clarified that the tree fell soon after the 100th year celebration of the peace treaty held in 1986.

The Baale of Ibudo Kiriji, Enoch Famodimu, confirmed this and said the tree could not have survived more than hundred years owing to the number of bullets buried in its body.

Fejewe stream is also an important part of the town’s history. But the stream dried up due to the current dry season. Baale Ibudo Kiriji offered further explanation on the site, revealing that “the stream turned to blood following large scale killings that occurred during the war. The surviving warriors did not have a choice than to bathe with the polluted water. That was how the name stuck.”
———————

My path through Kiriji war jungle
By Tunde Busari

The geography of Igbajo, characterised by hills, valleys and plains, makes a voyage to the ancient town an unusual excursion. Undertaking the trip to the historic town in plain language is not a task for the faint-hearted.

You have to be physically strong to climb, descend, climb and descend again until you are through with your assignment. I set out from Ibadan without a clear picture of the town called Igbajo in Boluwaduro Local Government Council of Osun State.

A long wait at Ikirun motor park for a commercial vehicle to Igbajo gave me a signal of a journey on a bad road. It was obvious from the reluctance of commercial motorists to travel that way .

Frustrated, I looked for a commercial motorcycle operator who cashed in on my desperation and charged me N700 as against the regular N300. The light complexioned okada operator, however proved to be resourceful, as he provided answers to my preliminary inquiry into Igbajo and its people.

He dropped me at the palace of the Owa of Igbajo and patronisingly offered me a deal to take me back to Ikirun after my assignment. I told him the constraint of such arrangement, which was no other than his pocket-tearing charge.

He left but not without assisting me with taking a photograph at the entrance of the palace. My session with Oba Fasade commenced on a lighter mood when I lamented how tasking it was to access the palace on the hill.

“You also felt it? Good! That is ‘welcome to Owa’s palace.’ Isn’t it good for your health? Physical exercise prevents sickness. That is what we are enjoying here. When next you come, you must prepare to climb before you reach the Owa,” he said with laughter.

It is worthy of note that two traditional chiefs were in the palace awaiting my arrival. The Baale Ibode Kiriji, Enoch Famodimu and the Iyalode of Igbajo, Adebowale Bimpe were already seated in compliance with the directive of Oba Fasade.

Later joined by the Oluode of Igbajo, Adeolu Oluborode and the Odofin Iloro, E.A. Oladejo, the chiefs provided the necessary guide and security to all the historic places on my list. The hospitality extended to me in Igbajo was a contrast to some odd experiences I had endured in previous assignments.

Of all the sites we visited, the Kiriji War site was more challenging going by the topography of the forest. Located about seven kilometres to the town, the place, now a farmland, is not one to visit regularly.

Although I did not show fatigue while the tour lasted, I returned to office with body ache which resulted to malaria fever. In fact, I almost put a call to the Owa of Igbajo to ask if I had not followed his chiefs to wrong places. This is on a lighter mood, anyway.

The trip to Igbajo was remarkable as it offered me the rare opportunity of visiting the historic sites I had read and written about but which had always seemed far beyond reality.

‘Our pairing responsible for early eviction’