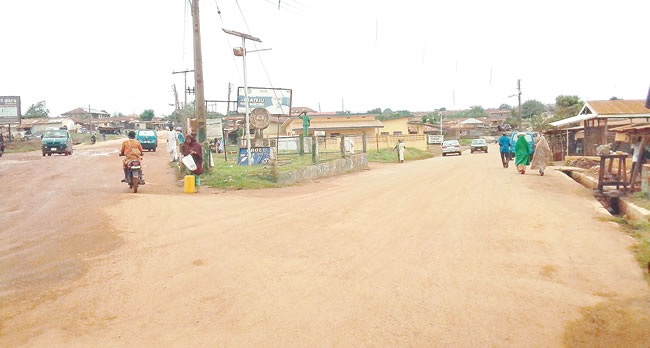 The history of Ifon-Orolu, Osun State, forbids members of the town to drink palm wine or wear red cloths. Obatala, the father of Olufon, drank and paid the price, hence the declaration that no Ifon-Orolu indigene must allow history to be repeated. TUNDE BUSARI reports these peculiarities.

In the entire landscape of Yorubaland, no other town can rival the ancient town of Ila Orangun in palm wine production.  It is served everywhere, a contrast to other towns where diluted palm wine is often the standard. It is said that the economy of Ila-Orangun is powered by revenue from palm wine, which is regarded as curative liquid against ailments like malaria fever.

On the contrary, in Ifon-Orolu, another ancient town in Osun State, palm wine is an abomination, which the ancestor of the town did not only frown on but outlawed outright.

Clearing the air on the matter, the Olufon of Ifon-Orolu, Oba Almaroof Adekunle Magbagbeola, in confirming the claim, went down memory lane and offered historical perspectives to it. He said palm wine caused a major distraction for Obatala, the progenitor of Ifon-Orolu, on his way to the earth. It nearly earned him sanction from Olodumare who sent him.

He was said to have lost consciousness after consuming it and lost his track as well.  Oba Magbagbeola stated that Olodumare became impatient when Obatala did not return to give him report of his journey to the earth. He then sent Oduduwa, who was Obatala’s younger brother.

“That was the reason palm wine is forbidden for us and a taboo in Ifon. The rest of the story goes thus. Obatala’s instinct suddenly alerted him that God had sent his brother, Oduduwa, on the same mission. He quickly rose and continued his journey. He finally settled at Itapa in Ile-Ife. If you go to Ile-Ife, you will see Itapa and the evidence of this story,” he said.

Aside from palm wine, Oba Magbagbeola also revealed that under no circumstance should a member of the five ruling houses-Oluyeyin, Olumoyero, Morounfolu, Orisagoyebo, Odunolu,- don red-coloured dresses.

Further findings, however, revealed that the law is fast sliding into extinction as some indigenes now dismiss it with a wave of the hand, saying the influence of modernity has submerged such belief. Yet, none of them wished to be quoted apparently for fear of any ‘spiritual’ repercussion. Though one of the respondents, who gave his name as Semiu, admitted that he was aware of the law, he said he was not sure of the compliance level of the people.

Oba Magbagbeola also expressed his reservation over the implementation of the no-palm wine law. He said contemporary system of government which places traditional ruler under the authority of the local government is a constraint to the law, but affirms the observance of these traditional laws by the traditional ruling houses.

“Things have changed, and there is little we can do about it because we all desire the modern life that we have today. But I must say that the law is in existence even if it exists in people’s mind. As the Olufon, I must be seen to protect the custom. I must be seen to spell out what happens to violators of the law, according to our tradition,” he remarked.

In his reaction, the Araba of Osogbo, Chief Ifayemi Elebuibon, stated that, “We should not use foreign civilisation to undermine our own civilisation. It is unfortunate that those who are supposed to know refuse to realise that we had our civilisation long before the missionaries came to our land. Go and check our system of government and compare it with what they were practising in those countries at the same time. You would marvel and give credit to our forefathers,” he said.

An Ilorin-based legal practitioner, Mr AbdulGaniy Bello, said the topic is under customary law and affirmed that customary law is enforceable, especially due to long usage and if such law has passed what he called validity test of conformity with public policy.