Ifewara: A town where Ife, Ijesa dialects live in harmony 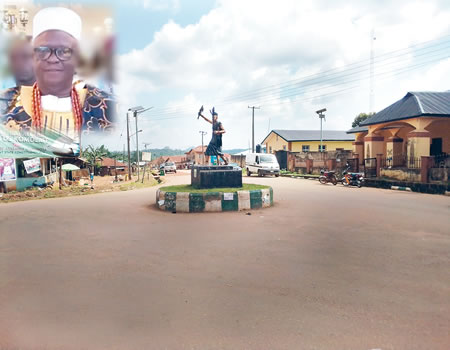 Dressed in full traditional costume, though of lace fabrics, watching some members of the Adimula-In-Council as they were exiting the palace, was a Yoruba cultural value to behold. Their appearance exemplified what Yoruba custom is with their beads sitting comfortably on their necks. They were chatting as they were passing by our correspondent.

When he paid critical attention to their conversation, it was revealed that the chiefs were speaking two different Yoruba dialects of Ile-Ife and Ijesa. Recovering from the disbelief, our correspondent decided to dig deeper with a view to uncovering how and why the two dialects are spoken in one town, in contrast to what obtains in other Yoruba towns and communities.

Findings revealed that Ifewara is an off-shoot of Ile-Ife, the acclaimed cradle of Yoruba race, which is only about 25 minutes’ drive. History has it that the sleepy town was founded over 600 years ago following an unresolved succession feud over the Ooni of Ile-Ife throne by two brothers, none of whom was prepared to shift ground.  During the hostility, the elder brother known as Adeniregun lacked ability to match the strength of his brother, despite that he enjoyed full support of the chiefs.

In the end, he lost the struggle and left Ile-Ife backed by the chiefs. They arrived at the site which is known today as Ifewara. The choice of Ifewara was natural because of its close proximity to Ile-Ife and being the land on which Adeniregun was farming before the crisis.

Another source further disclosed that nobody was dwelling on that land when Adeniregun eventually relocated and made it his new settlement.  He was said to have been so familiar with its geography Adeniregun such that it was his unofficial abode. This account for Ifewara’s status as an agrarian town peopled by cocoa farmers and teeming growers of food crops such as Breadfruit which, at a point, was synonymous with Ifewara. The town is also blessed with gold.

On the other hand, Ifewara is few kilometres to some Ijesa communities with which a long commercial and administrative interconnection has since been established. It was learnt that before the town is the headquarters of Atakumosa West Local Council Development Area (LCDA) created by the immediate past administration of Governor Rauf Aregbesola, and surrounded by Ijesa towns and communities.

The Adimula of Ifewara, Oba  Hezekiah Owolola shed more light on the observation of our correspondent, corroborating the history which traced the town to Ile-Ife and added that all the quarters that make up Ile-Ife are also found in Ifewara. He also confirmed that Ile-Ife and Ifewara are two brothers who could not agree on a succession to the throne of the Ooni was it became vacant over 600 years ago.

“We have no problem with the two dialects because we are peaceful people who are also accommodating to other people, even outside Yoruba nation. So, the issue you raised is not a serious issue because we don’t even think about, again, because it is not a serious issue. What is paramount to us all is peaceful co-existence based on love of one another. Once God has blessed us with this, there is no other thing to worry about,” he said.

To further establish the strong link between Ile-Ife and Ifewara, the reverred Adimula said that until 1935, his traditional title was the Ooni, which was changed to the Olufewara. He disclosed that his 42-year reign saw another change from Olufewara to the Adimula, which he currently answers.

“I am of firm believer in dynamism of this world. For instance, could one have imagined the level which technology has taken us now in about 50 years ago? Technology has simplified everything to the extent that one does not need to sweat to do a lot of things again. So, my title was formerly the Ooni after which it was changed around 1935 to Olufewara but when I got to the throne, I saw the need to change it again, and I did and changed it to Adimula of Ifewara. Talking of the meaning of Adimula, it means a savior one can run to when one is confronted by challenges. I am comfortable with the title because it asserts the status of Ifewara as a distinct unit,” he said.

Unlike other traditional rulers who take off on a happy note, Oba Owolola commenced his journey on a scary step. Why? A prominent son of the town, who was to be the mainframe of his reign, Chief Henry Fajemirokun suddenly dropped dead while on a business trip to the former Ivory Coast one week after he gave Oba Owolola a brand new car. That incident marked a baptism, which the monarch said he would not wish for any traditional ruler.

“It was a shock. He died one week after he had given me a brand new Volvo. He gave me the car on Wednesday and died the following Tuesday. It was a challenge I cannot forget being a young man with no means of sustenance. My salary was N60. After tax of N6 was deducted, I had N54 left to run the palace and do other things. My wife was a banker. She earned N250 salary per month. It was a trying beginning for me but to God be the glory that I was able to survive the challenge,” recalled.

APC on a journey to nowhere in Oyo —Ilaka