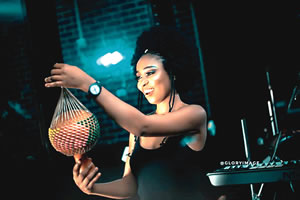 Fast rising act Ifetope Adams has expressed her excitement about the release of her new song entitled ‘Aje’.

Ifetope who is a signee to FS7 music records said that she is elated that she has dished out a  unique sound that will definitely capture  the hearts  of music lovers and also make herself known as one of the female artistes that are making big moves in the Nigerian music  Industry.

“ I’m super excited about this song ‘Aje’, it encapsulates the kind of music I represent, I sing the mind of the people and I know a lot of people who listen to this song will relate to the lyrics as it applies to their personal lives,” she said.

The singer also added that as the only female on her record label and a back up singer to the leader of the music group(Femi solar and the SJB), Femi Solar, she has gotten special treatment and immense support from her team and fans. She further  assures that in no distant time, the world would see what she is made of.

“Being the only girl in the band and also a backup singer  has been a good thing for me,   it has opened ways for me like getting  special treatment from the whole band members and my  fans. I’m assuring everyone out there that very soon, the world would see the stuff I’m made of”, she added

The newly released song, ‘Aje’ is produced by Tmsoundz.

Nigeria too toxic for growth to happen now—Charly Boy