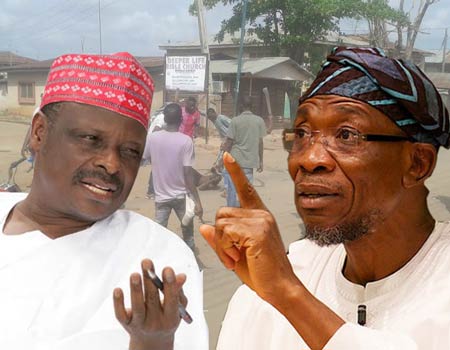 GOVERNOR Rauf Aregbesola of Osun State and former governor of Kano State, Senator Rabiu Kwankwaso, on Tuesday, tasked residents of Ile-Ife to provide information on miscreants and hoodlums, who hijacked recent crisis in the ancient city to perpetrate killings and wanton destruction of properties.

Both spoke during a stakeholders’ meeting held with leaders of both ethnic nationalities at Ife City Hall.

Before the meeting, Aregbesola and Kwankwaso had visited Sabo, the scene of the crisis, where they appealed to the people to avoid acts that could fester the crisis in the interest of peace and unity.

Speaking during the meeting, Aregbesola said, “security information available to me indicates that miscreants and hoodlums seized the opportunity of the clash to cause mayhem and needless killings of people while they also destroyed valuable properties.”

According to him, “I have talked to both Yoruba and Hausa people to come out with credible information on the identities of these miscreants and hoodlums so that they can be made to face music. In situation like this innocent people would be arrested, but I can assure you that proper and thorough investigation would be carried out and anybody arrested unjustly would be freed by the Police.

In his remark, Kwankaso noted that the government had the responsibility of protecting the people, stressing that “the destruction of lives and property are condemnable acts.

Speaking earlier on behalf of the Ooni of Ife, Oba Enitan Adeyeye Ogunwusi, the Obalufe of Ife, Oba Idowu Adediwura, declared that the clash between Yoruba and Hausa traders was not as a result of ethnic differences, saying “it was a mere disagreement between two people, which was hijacked by hoodlums.”

Meanwhile, the House of Representatives, on Tuesday, urged the Federal Government to disarm the communities bearing arms in Osun State.

The House also asked Osun state government to pay compensation to people who lost their lives in the communal clash.

The House also asked the Committees on Police Affairs, Human Rights, and Emergency and Disaster Preparedness to investigate the incidence.

The House equally resolved to send five member delegation to convey its sympathy to the government and people of Osun State as well as the Ooni of Ife, leaders of the Hausa community and other stakeholders and to report back within two weeks for further legislative action.

He said the unfortunate communal disturbances between the Yoruba and Hausa communities in Ile Ife, Osun state on March 8, should be checked.

He, however, appreciated the efforts of the Osun State government, the Nigeria Police, traditional rulers and other stakeholders, at deescalating tension and restoring normalcy in the wake of the incident.

He then appealed to the media, particularly the social media, sociocultural organizations and all other commentators to exercise discretion and utmost restraint in reporting and commenting on the incident, so as to avoid raising undue anxiety capable of aggravating the situation.

Most of the lawmakers also called for the urgent need to nip the crisis in the bud and as well as ensure that there was no reoccurrence.

The motion scaled through when the Deputy Speaker, Honourable Lasun Yusuf put the motion to vote.