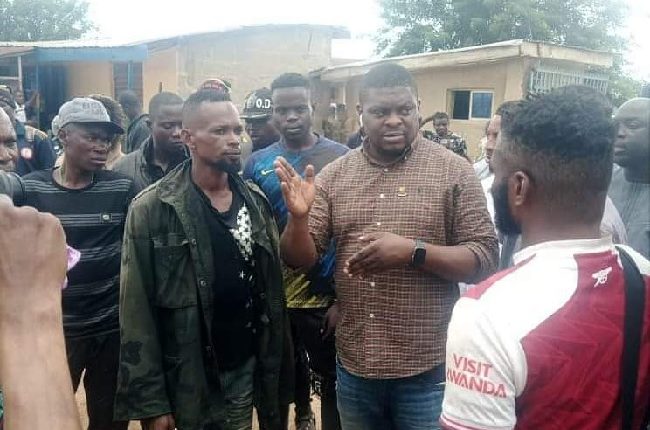 Adeojo made this call while addressing aggrieved members of the community who led a protest to the Ido Police Station over the kidnap of their community head, Baale Tafa Apanpa.

Apanpa had been abducted by gunmen suspected to be Fulani herdsmen, on Tuesday.

Addressing the distraught residents, Adeojo said he had opened discussions with all relevant security agencies in the state, to ensure that Baale Apapan and his wife are rescued from their abductors within a short time frame.

The Chairman who had earlier spoken with three suspects who were apprehended by operatives of the Vigilante Group (HVGN) and handed over to the police, appealed to leaders and members of the community to remain calm as necessary machinery have been put in place to make sure the abducted Baale and his wife are rescued and the abductors brought to book.

Noting that security was everybody’s business, Adeojo also enjoined residents of Ido local government, youths and community leaders to be vigilant and speak up whenever they observe strange faces around their neighbourhood.

VERDICT: MISLEADING-! UNICEF in its report explained that though there are different kinds of risks and harms that have been linked to children’s exposure to pornography but there is ‘no consensus’ on the ‘degree’ to which pornography is harmful to children.

“Please do not talk to my father. He is yet to come to terms with the death of his son. It is a most tragic experience. How does one quantify the loss of a dear brother? My brother was killed like an animal by two herdsmen. His offence was that he asked them to drive their cows off his already cultivated farmland,” Bisi Olaosepin, whose brother was hacked to death, struggled to hold back his tears as he relayed to Sunday Tribune the horrible experience that culminated in the passage of his brother…Ido residents protest Baale’s kidnap as LG Chair calls for calm