Entertainment
By Tribune Online On Mar 10, 2021 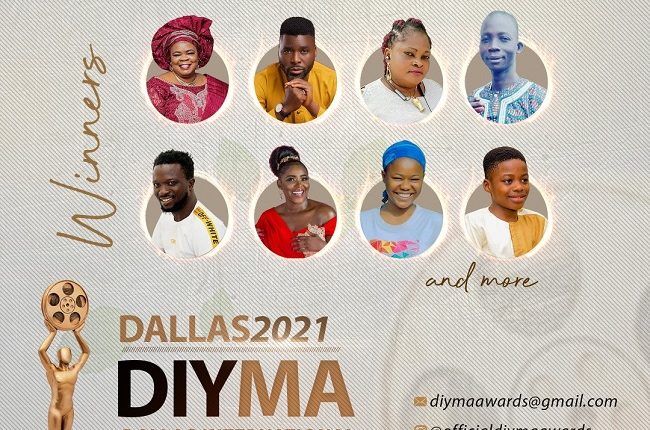 As part of celebrating the creativity of Nigerian movie makers for their roles and entertainment of Nigerians in and outside the country, Olanrewaju Olakanlu and Oladunni Badru known as Mr. and Mrs. Kogberegbe recently organised an award to celebrate their impact and hardwork through the DIYMA Awards.

Dallas International Yoruba Movie Awards (DIYMA) is not only aimed to recognize and celebrate creativity in the Yoruba movie industry but also to encourage those who have been promoting the Yoruba culture through the movie industry. This which the Award’s aim was reached on the 5th of March, 2021 when actors and actresses were celebrated.

One of the winners of the award, Ibrahim Chatta who won the Best Actor category took to his Instagram page with a live video to appreciate his fans, lovers, family, loved ones, colleagues and everyone for their usual support.

He said: “Every nominated actor alongside me deserves this but I thank God for having this.”

Speaking about the award, he mentioned the fact that no money was collected from the nominees/winners, which is very unusual.

The actor confirmed and made it known that he received a cash prize as his account details were requested by the organizers of the award.

The DIYMA Awards funded by Mr and Mrs Kogberegbe Movie Fund Project had 16 categories in total and 16 winners were all awarded.

Below are the categories and winners of the 2021 DIYMA Awards:

Meanwhile, the controversial couple, Olakanlu and Oladunni (Mr & Mrs Kogberegbe) revealed during the award ceremony that they have funded an upcoming Yoruba Movie Producer 100% under the umbrella of their outfit, Creative Village all in a bid to support the Yoruba Movie Industry.

They expressed their anticipation towards the movie production and assured their fans that it would be a great movie that they wouldn’t want to miss.

Foundation commences another round of distribution of face masks, exercise books to Delta schools