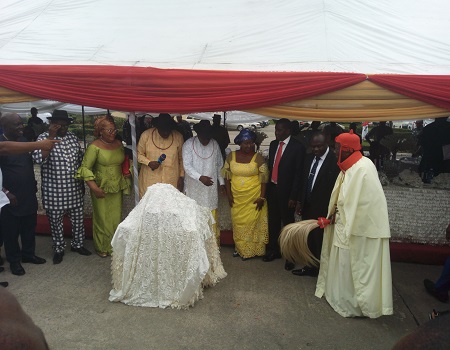 FORMER governor of Delta State, Chief James Ibori, identified unemployment as the reason for the rampancy of oil bunkering and its variant.

He, therefore, called for an urgent attention to address the menace in the Niger Delta region to save the region.

Ibori made the call on Wednesday at a Colloquium/Book Presentation in honour of Prof. Gordini Darah who turned 70 and also retired from active service.

Darah retired as a professor in the Department of English and Literary Studies, Delta State University (DELSU), Abraka.

The book was titled “Scholarship and Commitment, Essays in Honour of GG Darah.”

Ibori, who lauded Darah, urged him to channel his wealth of experience to address the numerous challenges facing the Niger Delta.

Ibori reiterated that unemployment was one of the reasons the illicit business of oil bunkering was flourishing.

He warned that the situation might lead to underpopulation if not quickly checked.

“Prof. Darah, I challenge you that the job is not done yet. The other time I was in Oloibiri in Rivers, people cannot breathe well because of the activities of both legal and illegal oil activities.

“We have generic solutions to the problem and one of it is unemployment. So we need to go into the region and find a way to deal with the problems.

ALSO READ: No deference between agitators and criminals in Niger Delta ―Uduaghan

“It is a serious problem, we need to talk to our people to find a way to deal with it, if not, we pray that we will have a population that grows and not deplete,” he said.

Ibori said that Darah was very instrumental in his administration particularly in the advocacy for a better living the Delta people.

“He only came to join us and enrich the government of Delta. Darah contributed his quota to the development of the State. He advocated for a better living for the people of Delta,” Ibori said.

Gov. Ifeanyi Okowa of Delta was represented by his Chief of Staff, Government House. Mr. Tam Brisibe, who averred that the revenue of the state has improved since Oct. 2017, assuring the people of more dividends.

The highlight of the event was an art exhibition by Dr. Nelson Edewor of DELSU.

Use Ramadan period to pray for peace in Nigeria, Fayemi urges Muslims

2019 Election: Seek support, don’t depend on me for victory, Ibori warns…