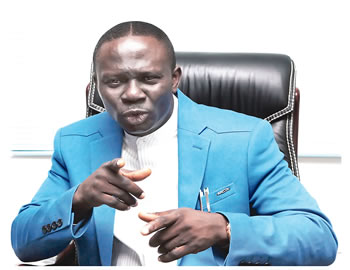 KASSIM Afegbua, the Media Aide to the former military head of state, Gen Ibrahim Badamasi Babangida on Tuesday filed a N1 billion fundamental human rights enforcement suit against the Inspector-General of Police (IGP), Ibrahim Idris, the Nigeria Police Force (NPF) and three others over alleged violation of his fundamental rights.

Joined, along with the IGP and the NPF as respondents in the suit brought pursuant to Order 2 Rule 2 of the fundamental rights enforcement procedure rules 2009, are the Force Public Relations Officer, Jimoh Moshood, Nigerian Television Authority (NTA) and Channels Television.

In the suit, filed at the Federal High Court in Abuja yesterday, the IBB’s spokesman seeks an order of perpetual injunction from the court, restraining the Police from the continued witch-hunting, harassing, intimidating and persecuting him on the basis of the letter he wrote on behalf of his principal, Gen Ibrahim Babangida.

He also seeks “an order directing the respondents to stay action and to desist forthwith from proceeding with any process whatsoever, including, but not limited to any purported investigation, detention, prosecution of the applicant or otherwise, which is not connected, associated with or premised upon the letter he wrote on behalf of his principal.”

Afegbua also wants the court to order the respondents to apologise to him through the NTA, Channels Television and also in three national newspapers.

The image maker to the former military head of state, who hinged his suit on 15 grounds said Babangida did not complain to the Police or any other security agency of any infraction in respect of the letter he wrote on behalf of his principal on February 4, 2018.

He said the IGP, the Police and the Force PRO, through the NTA and Channels Television, declared him wanted, an action he said put his life in serious jeopardy.

According to the applicant, in the suit filed by his counsel, Kayode Ajulo, he was not, at anytime invited by Police and there never an attempt to arrest him and he resisted, hence there was no basis to declare him wanted.

He said he has been painted as a fugitive and common criminal with no medium of dignity and that he could be bundled by any individual or even killed by any law enforcement agent on the basis of the declaration of the 1st to 3rd respondents.

According to him, “the 1st to 3rd respondents failed to adhere to the procedures for declaring a person wanted and are in breach of regulations.”

He contends that his harassment and threats of his arrest and detention are not for public good but for ulterior motives and in any event, are not based on reasonable suspicion that he has committed any criminal offence”.

No date has been fixed for the hearing of the suit, numbered FHC/ABJ/CS/129/2018, as it has not be assigned to any Judge.