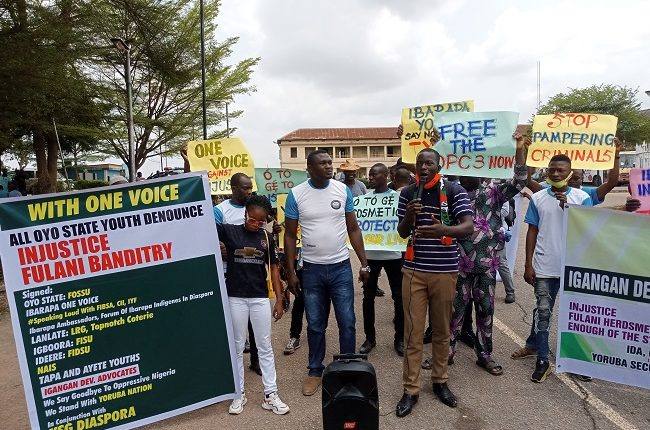 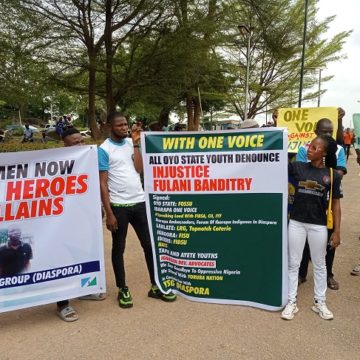 Youths of Ibarapa land have warned against injustice in the handling of the case involving the three men of the Oodua Peoples Congress (OPC) who were involved in the capture of notorious Fulani, Iskilu Wakili.

The youths who staged a protest to State Secretariat, Ibadan, on Monday, said there were signals pointing to government authorities being keen on pampering criminals and jailing the OPC men whom they described as heroes.

With placards to drive home their agitations, the protesters, under auspices of Igangan Development Advocate (IDA), Yoruba Security Group (Diaspora), Federation of Oyo State Students Union (FOSSU), called for the release of the OPC men.

Leading the call, Convener, Igangan Development Advocate (IDA), Mr Oladokun Oladiran, warned that the nation was at risk of having more youths taking to acts of criminality going by government’s disposition towards banditry and various forms of criminality.

He decried that rather than for the three OPC men to be commended for daring the odds to help security agencies affect the arrest of the notorious Iskilu Wakili, they were being remanded in custody.

Oladiran chided security agencies who he said still provided cosmetic protection of the lives of the people of Ibarapa.

Oladiran said, “We came here the other time and asked for security but the security personnel are unable to go to where the terrorists have put their base. A Fulani man, upon our land, demarcated a ‘No cross’ zone and warn the indigenes against crossing the line.

“Both Ibarapa residents and even security agencies fear to enter the den of the notorious Fulani man.

“Some men decided to arrest Iskilu Wakili and have been remanded in custody. A young innocent boy was going to the farm and was shot and we presented this fact.

“Amotekun was deployed and were hiding away inside the local government Secretariat at Ayete.

“The OPC men went through the valley of the shadow of death and arrested Wakili and have been kept in custody.

“We are not just out for the three OPC men, we are out to say our generation matter. The signal we are getting from the government that we should embrace criminality. The Ibarapa youths are standing against this injustice.”

Another protester, Emiola Solomon kicked against perceived favouritism of one ethnic group over the other in dealing with the case of the OPC men remanded for arresting Iskilu Wakili.

Emiola said, “People risked their lives to go into the forest to make an arrest but are remanded, what message are we preaching?

Addressing the protesters, Chief of Staff to the Oyo State Governor, Bisi Ilaka, assured that the state will be vigilant to ensure that justice is done in the case involving the OPC men.

He added that the state government was aware of the security challenges confronting the Ibarapa zone and will continue to strive to ensure no citizen of the state suffers injustice.

Ilaka said, “The protection of lives and properties of all that reside is of utmost importance to this government. Ibarapa remains a hotbed of all kinds of activities and we will leave no stone unturned to ensure that justice is done.

“We lean on the police and other security agencies to come to a finding that is just, fair and right. No injustice will be meted on all citizens of the state.

“We had said the state will include in our security architecture the voluntary non-state actors in order to take ownership of our security.

“We know the police are at times overwhelmed and invite some form of suspicion but together we’ll ensure no injustice befalls anyone doing what is right.

“We will be vigilant to follow through the court process (involving the OPC and Iskilu Wakili case) to ensure that justice is done.”