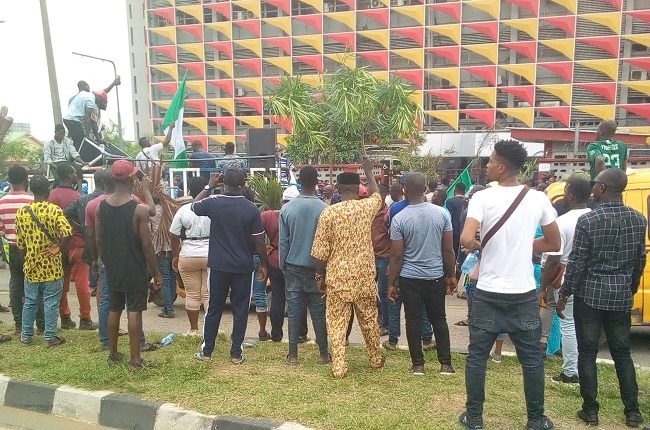 AS part of efforts to ensure peace reign in the state, youths in Ibadan under the aegis of Oyo State Leading Patriots on Monday said it had begun a house-to-house appeal to #EndSARS protesters and by extension those who have hijacked the protest in the state.

The group said its members were worried over the recent development which led to burning of about five police stations in the state.

Founder of the group, Asiwaju Nurudeen Akinade, who led youths from higher institutions in the state to the state commissioner of police, Mr Nwachuku Enwonwu, at the force headquarters, Eleyele Ibadan, said the state was renowned for being peaceful before the incident.

Akinade said “having watched with horror in the past days, the manner with which some unscrupulous elements have murdered some of your men, we, Oyo State Leading Patriots, have come out to speak against the social disorder and killings.

“We are worried that our state which is known for its peaceful coexistence of all and sundry might be turned into a war zone if we did not speak out on time.

“We are here to commiserate with you over the loss of your men and to assure you that the youths of this state are solidly behind you and would do everything legal to ensure that normalcy is restored to our dear state,” he said.

He appealed to the police boss to return his men to the stations and street across the entire state, saying: “many commissioners of police in the past usually like to settle in the state even after they have been transferred due to the peaceful atmosphere we have here.”

Akinade noted that Nigerians, especially the Oyo state people who are law-abiding citizens cannot reject the support of the Nigerian police, urging police to ensure the state is well secured.

He further said the group embarked on the visit to the police boss to assure him of total support of the youths, adding that they are visiting all the traditional rulers in the state before embarking on the house-to-house appeal.

ALSO READ: Why Nigeria will miss out on $13trn 5G projected revenue ― Expert

Reacting to their courtesy visit, the commissioner of police in the state commended the youths for their patriotism and commitment to the development of the state.

He said himself and the Deputy Inspector General of Police, Leye Oyebade had met with the governor of the state and traditional rulers in the state to find a lasting solution to the crisis in the state.

He urged the youths to supply information to the police capable of exposing criminals in their community, saying: “We deliberately asked police to return to their barracks to avoid casualties. But, the hoodlums still killed our people and maimed them.”

In his reaction,  the Olubadan of Ibadan land, Oba Saliu Adetunji lauded the group over their peaceful approach and urged them to continue to be law-abiding in their quest to restore normalcy in the city.

The monarch thereafter prayed for them adding that their conducts have shown that they have the genuine love of the state at heart.

Also reacting to their visit, Eze Ndigbo of Ibadanland, Dr Anozie condemned the rumours going around that the Igbos are planning to join forces with the hooligans who hide under the guise of the demonstration against police brutality on civilians adding that the Igbos in Yorubaland have lived peacefully for centuries, hence, they will never join any forces or group that is poised to destroy Yorubaland.