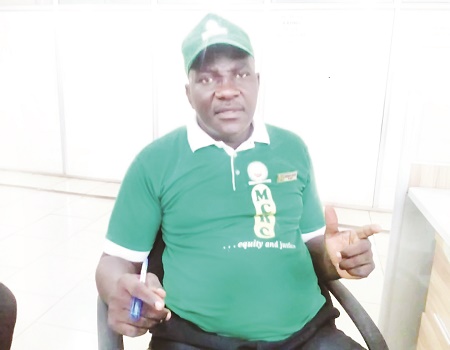 How were you involved in the discovery of the Olore correctional centre where 259 inmates were released by the police on Monday?

Around 7:00 a.m. on Monday, that’s 4th of November, one of our comrades (a human rights activist) called me that he received a distress call that some alfas and a boy were having an argument at Orita Challenge, in front of Glo Office; that a crowd was gathering and the situation seemed to be very terrible.

I instructed him to go to the scene to rescue the boy and take him to Orita Challenge police station and meet the divisional police officer (DPO) to tell him what happened. We learnt that 22 inmates escaped from the Owode-Apata centre of this alfa (he has a centre at Owode Apata) and that this boy is one of them.

Our comrade met with the DPO, narrated the story and wrote a statement on what happened at the Apata police station. Based on this, DPO informed the Deputy Commissioner of Police and the Area Commander at Iyagangu.

They reinforced and visited the Owode, Apata camp. But on getting there, the alfa at Owode Apata camp had run away. They must have got the news that the police were coming for them. The place was virtually empty.

I give kudos to the police for taking quick action when we reported. We are the ones that actually reported the matter to them. The boy then hinted that they have a headquarters at Ojoo where a lot of inmates like himself were being kept.

So, the DCP, the DPO, the Area Commander and everyone now mobilised to Ojoo, where they now discovered that a lot of things had been happening. What they saw there was alarming. That was what triggered the alert of the commissioner of police to the scene.

On that same spot, the commissioner of police then joined us, and behold, we found the whole scenario as it were on Monday.

That was how they rescued the inmates. When we got there, some of them had escaped. The 259 men at the camp were not the actual number; they were far more than that. Some of them had been evacuated. We even got information that they evacuated some of them to another camp at Aroro Makinde.

I want to say further that we give kudos to the Oyo State governor, Engineer Seyi Makinde, for rising to the occasion on time.

There are still many other centres like this in Ibadan and its environs that are being run by these so-called clerics, both Muslims and Christians, where they are chaining and handcuffing people in the name of giving them treatment.

There and then, those inmates that were evacuated at this same Olore centre fifteen years ago were brought to the social welfare office. I was the officer that rehabilitated them then. We handed them to their parents at that time.

It was after then that these people started regrouping again and I knew that at that time, the head of that Oloore centre was prosecuted by the police. Our concern then was the rehabilitation of the children.

We were not carried along as to the process of the prosecution of the founder of the place and all that.

As social workers, we feel that the solution to this type of problem should be a concerted effort. Some of these children that were met at the camp were brought there by their own parents because they (the children) had become defiant beyond parental control.

When a child is beyond parental control, there is a need for the intervention of the professional social welfare practitioners, to reform, rehabilitate and integrate that child.

So, to solve this problem, we advise that the state government should create a kind of task force –social welfare task force – that will work together with the Ministry of Women Affairs and Social Inclusion, Ministry of Health, Ministry of Education and professional social welfare practitioners that have experience in solving this type of problem.

If this is done, there will be sanity, then the government can also invite those who are running this type of centres because it is not all they are doing that is bad.

Some of those defiant children that were taken there were actually reformed. Let us look at the good aspect of what they are doing and stop the bad aspect. The government can now incorporate the Ministry of Health to regulate their activities in line with the modern trend of medical services.

If this is done, we will put all hands together. Then there are non-governmental organisations that can also be helpful if incorporated into the system. We have the Child Protection Network, Oyo State.

We have the Child Growth Concern Initiative, and we have the Community Chest Council in Oyo State. We have an organisation like FOMWAN, NASFAT, CAN and other NGOs that are child-focused. If we bring all these bodies together, we can together find a lasting solution to the problem rather than the issue recurring and the government taking temporary measures.

But the police credited the distress call to that boy?

Yes, the police claimed that the boy called the DPO. No! It was one of our comrades that went to report the case at the Orita Challenge Police station that actually blew the thing open.

Do you mean that the boy was taken to Olore correctional centre by his aunt?

Yes, he was taken to the camp by his aunt, who claimed that the boy was stubborn and uncontrollable. His mother is late; the father is nowhere to be found. That was why he was taken there, and it was like that for most of the children sent there. His aunt has been arrested by the police; likewise some alfas. They are in police custody at Iyaganku.

There have been some reactions to this issue by NASFAT and some other groups. For me, I will not totally condemn these people. I will only want the government to look critically into the activities. Some of them are doing the society some good because if we tell people to come out and tell us their experience, we have some children that have been properly reformed through some of these alfas. Their excesses are what need to be curtailed.

For me, I do not think demolition should be the next thing. The place can be taken over by the government and converted for better use of the general public. The government can convert the buildings there to a proper psychiatric hospital which will be managed by the state, rather than demolishing the place.

Then, the parents of these kids should be invited for proper rehabilitation.