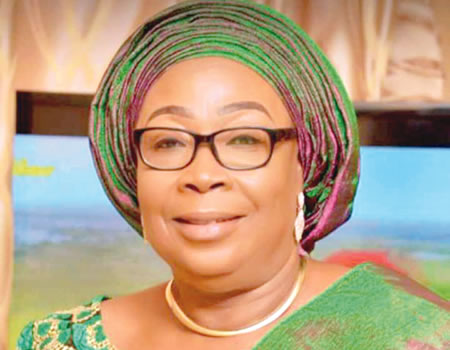 The Iyaloja (woman market leader) of Ibadan, Riswat Ameringun, aside being a successful business tycoon, is also a promoter of Yoruba culture. In this interview by TUNDE BUSARI, she explains the cultural heritage that the people of Ibadan is known for.

At the wedding of your daughter two years ago, you stunned your guests with your daughter’s performance of Ekun Iyawo, considered as part of Yoruba culture. What informed your preference for that type of wedding?

I do not want to be disconnected from my root regardless of what I have accomplished. I always like our culture. I saw an opportunity when my daughter was about to get wedded and used it to showcase the value of our culture.

How did you come about it?

There was an Ibadan Day during which the late Toyosi Arigbabuwo led such performance. I was so in love with the way they performed it. Right there, I made up my mind that one of my daughters would also do same. And when the time came, I told her, and she was interested. That was it. Alhaji Arigbabuwo was brought in. He was even surprised but I assured him that my daughter would perform it. He asked whether she could memorise her lines; I told him that as long as she had shown interest, she would do it. Then rehearsals started, and Arigbabuwo was impressed.

Do you think there is a peculiar status conferred on you by being an Ibadan woman?

Yes, I am Ibadan and very proud of my town because we are first among equals in Yorubaland. We are the pride of the children of Oduduwa. From time immemorial, we are known as a group of warriors who are brave and never scared of anything.  I did not need to study History as a course to know the origin of my town. The Ibadan warriors played important roles in protecting the Yoruba nation during the battle in Osogbo in 1840. But apart from being warriors, we are also known in area of trade. Since we are no longer in the period of war, we need to get involved in legitimate businesses. That is why we are known as serious business men and women.

Can you be specific on businesses with which Ibadan people are known?

We are into any business which is legal and which can bring a good turnover. We are not lazy. Go to Agbeni, go to Gbagi, go to Oje, go to Bodija and other major markets and confirm what I am saying. We detest laziness, and anyone found wanting is not respected at all.

Is that why you are also into business?

That is the truth. Business is in my blood, and my mother made it clear to me when I was a young school girl that ‘you may read to any level. Whatever you read, you are going to use it to record my sales.’ That was my mother for you. She knew I was keen on going to school but she did not discourage me. She always told me that I would return to business, and that was exactly what happened. While I was a student, I would return from school to her shop, helping her and understudying her too. She was selling provisions at Agbeni, and I was hawking beverages around.

Are you, therefore, advising parents to also encourage their schooling children to embrace business by the side?

It is a matter of preference of each parent because what I prefer may not make sense to another person. But I want to advise fellow parents to encourage their children to pick interest in buying and selling. Even when they are later employed in offices, they can still do their businesses to complement their monthly salary. I am in the best position to offer this advice because I did it and it worked very well for me. Even my last born in university still does business. I think government too has a role to play here by including vocational studies in school curricula. It will help our children because not all of them are made to work in offices. If the government encourages school leavers, it will relieve the government of the pressure from unemployed youths who constitute danger to the society.

As the Iyaloja of Ibadan, how can you describe your relationship with the Olubadan?

Going by my position, it is a matter of obligation that I build a close and good relationship with my father. I am here today by the authority of the Olubadan of Ibadanland, Oba Saliu Akanmu Adetunji  (Ajeogungunniso I). What this means is that there must always be a father-daughter relationship between us, and that is the true picture. I cannot do without visiting the palace. It is impossible! I must go to see him from time to time. Another important reason I must work closely with Kabiyesi is that he was a successful businessman before he became the Olubandan. Isn’t this an opportunity for me to tap from his well of knowledge?

How are markets coping with the COVID-19 and government’s measures in handling it?

Coronavirus is an unfortunate incident being experienced by the whole world. It has caused a lot of problems but we thank God for the type of governor we have in Oyo State. Governor Seyi Makinde has done well in the way he is handling the matter. Market operators are happy with him. He shows that truly he is a son of one of us. He also hawked as a young boy then, meaning that he knows what we go through in the markets.