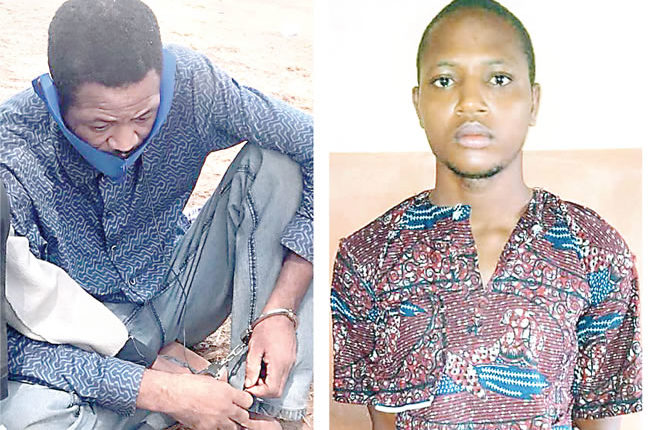 A Fulani man, Usman Hassan, who was one of the suspected masterminds of the kidnap of a farm owner, Mr Oluwole Agboola, from his farm on December 28, 2020, at Aba Odo, in Akinyele Local Government Area of Oyo State, and his eventual murder after the collection of N1.65 million as ransom, has disclosed how his brother, Dahiru used him to mobilise other suspects from Bodija Market, Ibadan, for the operation.

During his parade by Oyo State Police Command on February 10, Dahiru had said that Hassan had hinted him of coming to his boss’s farm to carry out the  kidnap operation.

He also disclosed that Hassan gave him N50,000 as his share of the money paid as ransom by his boss’s family.

It will be recalled that the kidnap syndicate, armed with AK-47 rifles, had invaded Agboola’s farm at Adegbade Village, via Aba Odo area in Akinyele Local Government Area on December 28, 2020.

After shooting into the air, the kidnappers, who were in military fatigues and face masks, whisked the farm owner away to an unknown destination.

A day after, on December 29, 2020, the kidnappers called Agboola’s family on phone, demanding a ransom of N50 million for his release.

After negotiations, they agreed on N1.65 million, which was paid on December 31.

However, the farm owner was not seen alive again, as his body was discovered in the bush not far from his farm on January 10, this year. He had been murdered by his kidnappers.

During investigation into the case, operatives of the Monitoring Unit of the state command discovered, through Dahiru, that one of the suspected masterminds of the kidnap was his blood brother, Usman Hassan.

But Hassan, who was apprehended by the Ogun State Police Command a couple of weeks ago, denied any initial knowledge about, or involvement in the farm owner’s kidnap and murder.

Speaking with Saturday Tribune, Hassan delved into his background and spoke on all he claimed to know about his brother’s plan over his boss. He recounts:

“I’m Usman Hassan, younger brother of Dahiru. We were born by the same parents.I was born in Ayetoro, Ogun State, where my parents still live.

“At the time of the kidnap and killing of my brother’s boss, Mr Oluwole Agboola, I was living at Bodija Market ghetto, where traders sell water melon.

That very day (December 28, 2020), my brother, Dahiru, sent me to go and pick his three friends from Bodija Market ghetto, and bring them to Aba Odo junction, close to the farm where he was working and living. He gave me their phone numbers to contact them.

“Before then, he used to come to Bodija, and I used to see him with those friends.

“When we got to the junction, we met him waiting for us. I asked him where he was going with the friends, but he told me to go and buy him two packets of cigarettes – Rothmans and Benson. He said I should go home, and gave me N2,000.

“I wanted to tell our elder brother who was living nearby, but Dahiru warned me not to. I also wanted to call Muhammadu, who was also a worker on the farm, that my brother was going with some friends to a place I don’t know, but Dahiru asked me why I wanted to do so, telling me to go back to Bodija.

“I have never worked with my brother’s boss, I couldn’t even recognise him.

“My brother is a liar for saying that I gave him N50,000 the third day his boss was kidnapped. I was even at home when he called to give me N20,000. He sent it to me through Point Of Sale (POS) machine. By then, I was in Badagry, Lagos State.

“That time, my motorcycle had a fault and I needed to repair it. I had asked him for a loan before he gave me the money. After repairing the bike, I sold it.”

When asked how his brother earning N15,000 as salary per month could have loaned him N20,000, Hassan confessed that he did not ask.

Continuing, he said: “I heard when my brother’s boss was kidnapped. I asked my brother if he had been seen, but he said nothing had been heard about him. He also said that the case had not been reported to the police.

“I told him to give his number so that I would have the update, but he said he was not having any phone.

“It’s a lie that I had initially told my brother that I was coming to kidnap at the farm. I swear with the religion I’m practising. He’s also lying that I gave him N50,000. We didn’t even see each other after the third day of the kidnap when he came to railway track (Oju Irin) at Bodija.

“On that day, Dahiru was so drunk that I could not talk to him. As I was asking him about how things were, he threatened to kill me if I ever told our elder brother anything. He even stabbed me on a side of my stomach and I’m still bearing the scar. I became afraid of him and kept quiet. It was at about 4:30pm.

“I did not tell police in Ogun that I was part of those who killed Agboola because he recognised his abductors as Fulani people. I only told them that I heard about it from my brother, later, that his boss was killed because his friends that I took to him said Agboola could identify them. I don’t know whether he went to where his boss was kept and killed.”

Hassan said his brother had always been domineering, as he had once sold his cow and motorcycle, and he could do nothing about it.

“I’m always afraid of my brother. I’m the fifth after him. I came to Ibadan to live with my elder brother who is senior to Dahiru. We have never lived in Kwara State,” Hassan stated.

He disclosed the names of friends he took to his brother on December 28, last year, as Onto, Ali and Abubakar.

He said that the police arrested him because of the news that he knew about Agboola’s kidnap and murder. He stated further that he ran from Ibadan to Ayetoro because of the story he saw on Facebook about everything his brother said against him.

He disclosed that he had not been in Ibadan for about two years, but left Ogbomoso for Ibadan, before returning to Badagry, and, then, Ayetoro. He said the business he was doing all over the towns in the states was commercial motorcycle riding.

“My brother just wants to put me into trouble. I’ve never been involved in kidnapping and I didn’t know my brother was into such a thing,” Hassan declared.

Dahiru and two others had been remanded in prison after they were arraigned in court on March 2. The case was adjourned till May 26, 2021.

Saturday Tribune learnt that Hassan has been transferred to Oyo police command for further investigations.

There are challenges of quality production, marketing in Nollywood —Filmmaker Rotimi Adelola

Hijab as red meat of bigotry