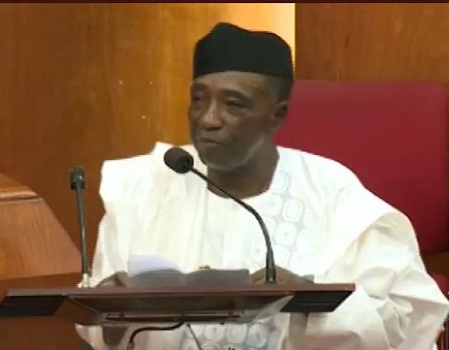 The Minister of Agriculture and Rural Development, Sabo Nanono, has warned that he will not tolerate indiscipline and lackadaisical attitude to work as a minister.

While directing all staff to be on their toes working, he said, “ I have worked in the public and private sectors and I know how people work in the two sectors’’.

He told journalists that he would hit the ground running in the discharge of his duties after his inauguration at the State House on Wednesday.

He also said that he would ensure that agriculture took its pride of place because it was critical to internal security.

He noted that agriculture was one of the most critical sectors in the country and that given the necessary attention; it would help solve many of the nation’s challenges.

“For a number of reasons, people tend to downplay agriculture because they do not know its importance to national development,’’ he said.

The minister stressed that if Nigeria got it right in repositioning the sector, it could “colonise West African region without firing any bullet because most of them depend on us from what we produce.”

He urged the relevant departments to put finishing touches to the ministry’s budget to meet the September deadline given by the National Assembly to receive the budget to enable it to conclude work by October.

He said “I do not know how far you have gone but I think we need to conclude work on that and get over it.

“I would want us to meet next week and get briefs on each of the departments. Just tell me what you are doing.

“I intend to see how we can come out with a strategy that will be appreciated by all and that would speak for us that we were able to do something to promote agriculture.’’

News Agency of Nigeria (NAN) reports that the minister is expected to tour the 40 agencies and parastatals under the ministry to familiarise himself with their activities.