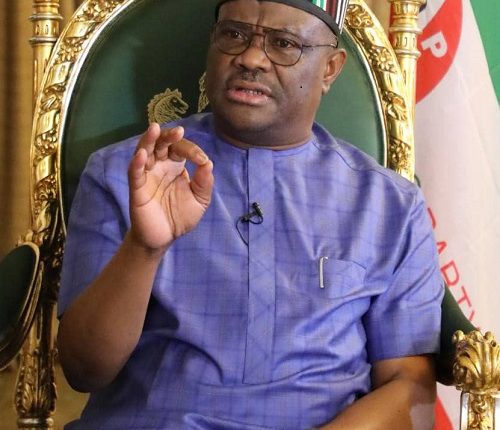 Governor of Rivers State, Nyesom Wike, has declared that there was nothing to jubilate over the Federal Government approval of $1.5-billion for the rehabilitation of the Port Harcourt refinery as it smacked of politics.

He explained that similar promises had been made in the past, particularly during an election transition period that never materialised.

Wike bared his mind during an interview on Channels Television, pointing out that people ought to bear in mind that there is a difference between mere approval and the actual release of the $1.5 billion for the rehabilitation.

“I am not going to jubilate because the Federal Government said they have approved $1.5billion for the rehabilitation of Port Harcourt refinery. Thank God they said so, but let us wait and see the outcome of it at the end of the day.”

The governor described as unacceptable a situation where all the refineries in the Niger Delta region, which is the hub of the oil and gas industry are not functioning.

“We have had these promises and nothing has happened. And so, I don’t want to start to sing hallelujah. Let us wait and see based on the approval and the statement made by the Minister of State for petroleum. We will hold him accountable to it.”

Wike stated; “They said, Nigerians if you give us APC the opportunity to remove this PDP government that told you it (refinery)will work, we are going to make it (refinery) work. And since 2015 it has not worked.

“Now we are going to the next transition, you are now coming to tell Nigerians you have made this approval. The same thing in Ogoni clean up. It has always come up when we are going for election.”

He stressed that ahead of 2023 politics, so many promises and approvals will be made by the APC led government to hoodwink gullible Nigerians that the country is being taken to Eldorado.

“If PDP was in government and it (refinery) never worked and you came and told Nigerians we are going to make it work. From 2015 till now has it worked? Why will it be that as you are going to the next transition now that you think it will work.”

On the issue of utilisation of the 13 per cent derivation fund, the governor said no former South-South governor, particularly those that served between 2007 and 2015 can equal the achievements recorded by the state government under his watch.

“I challenge any governor from 2007 to 2015 in the South-South to challenge the government of Rivers State that when I was Governor in my state I did this, you are not able to equal what we did or I did. Tell me who from 2007 to 2015, could come up to say I did eight flyovers.”

Governor Wike stressed that governors have been given a responsibility to govern their respective states and should be allowed to do so. He argued that a lot of politicians in the ruling party that are questioning the utilisation of state resources are just trying to conceal their own deficiencies.

He maintained that no citizen of Cross River, Akwa Ibom, Bayelsa, Delta and Edo states has any right to question how the resources of Rivers State is expended. According to him, only Rivers State citizens who elected the government have moral justification to demand accountability from his administration which has implemented several infrastructural projects in all the 23 local government areas of the state.

On the recent declaration by Asari Dokubo that he is now the leader of Biafra, the governor said anyone who knows the antecedent of the former Ijaw Youth Council leader, will not take him serious.

He urged the Nigerian media to stop giving credence to the activities of the likes of Dokubo and focus on more pressing challenges facing the nation.

Speaking on the issue of insecurity around the country, the governor reiterated that if the federal government had taken decisive action to tackle kidnapping when the Rivers State Government appealed for assistance, the menace may not have spread to all parts of the country.

The governor recalled that when Rivers State was faced with security crisis, most of the APC governors in the North, claimed he was playing politics. He wondered if they could make similar assertion now that they are grappling with the same challenge.

The British Parliament at the Westminster Hall held a debate on ‘e-petition 554150, relating to Nigeria and the sanctions regime’ on Monday. The government of the United Kingdom has however responded…I won’t jubilate yet