I wish my domain becomes small London — Alie of Ilie 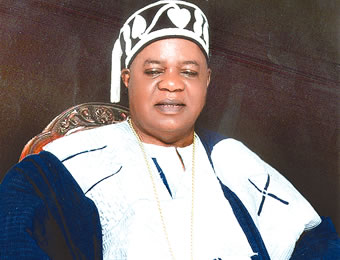 Oba Oladapo Olagunoye Siyanbola, Orisajenyo II, the Alie of Ilie, in Osun State is a former politician under the defunct Unity Party of Nigeria (UPN) and a trained radiography technologist. In this interview by KATE ANI, he shares his experience as he celebrates his 15th coronation anniversary and 70th birthday.

Did you deliberately remove the letter ‘S’ from your middle name ‘Olagunoye’ to distinct yourself from the famous Prince Olagunsoye Oyinlola?

No, I didn’t, that is my birth name and as contained in my birth certificate.

Are you a Christian?

I am an Alhaji.

How many shrines are in your domain?

Doesn’t that contradict your faith?

I am the head of all the religious groups; christians, Muslims and traditionalists and I actively practise them all. The top of the deities in town in Ilie is the Orisala festival.

Can you share your most exciting moment as a king?

That would be the day I was crowned as oba. Ten of us contested for the stool and I won. I was installed and definitely, I was the happiest man that day. My mother was still alive then and when I told her of my victory, she cried with joy. Those I contested with went to court, they are not happy about it; the matter is still in court.

How many wives do you have?

I have four wives. Before I became king, I had three and when I was crowned, I took another one.

Are you still on the look-out to round the figure to five?

Ilie is not a very popular town in Osun state; tell us more about that community?

It is an ancient town founded around the 16th century. It is still developing. We are recording a lot of progress in terms of development. Before I became king, I ventured into politics and this has connected me with so many people in the high places. As the oba of the town now—I ascended the throne 15 years ago–I am now using that connection to make sure that the situation in my town is improving, in terms of infrastructural and human development.

Since you became king, what efforts have you been making to fast-track the town’s development?

I have been doing my bits, I have been able to get the roads in Ilie awarded to contractors for rehabilitation and it is still ongoing. I have been to the national assembly to make sure that the flooded road linking Oyo, Osun and Ekiti states, which was flooded at Erinle River at Illie, is being reconstructed. The construction of the bridge has already been awarded by the government and the project is ongoing.

Also, I have been able to influence the establishment of the annex of the Ladoke Akintola University Teaching Hospital at Ilie. Before then, various administrations have contributed in one way or the other to the development of the town. Most especially, I must commend Governor Rauf Aregbesola for approving the appointment of Ilie indigenes into the services of the University Teaching Hospital for non professional cadres. That is; for employing the uneducated indigenes as cleaners, night watchmen, gardeners, ward orderlies and so on, while the students that have the pre-requisite qualification for admission into the university were given priority. They have been doing that for us over the years.

How is Ilie faring, in view of the suspension of the supposed re-construction of the collapsed Illie Bridge?

The construction of the bridge on the federal road that links the three states suffered a setback two years ago, when the current economic crunch started. As a result of that, the federal budget prepared by the national assembly failed to put money on that project and as a result of that, that project has been abandoned. I spoke to the state governor, Ogbeni Aregbesola, to use his position to influence the federal ministry of works to release funds for the construction of the bridge, so that it can be completed within a short period of time. Once it is completed, movements of people from Oyo, Osun to Ekiti state will be enhanced and also, reduce the hardship being currently faced by my people. I would also thank the governor for providing a motorised boat being currently used to ferry people to and fro the Erinle River.

With just one secondary school and four primary schools in Ilie, don’t you think that it is not enough to cater for its huge population?

I have spoken to the governor on the need to rehabilitate the schools scattered around these 30 villages. He has given instructions to the State University Basic Education Board (SUBEB) to visit all these communities and inspect all the schools that are there and they have done so. Presently, the schools are without teachers, what we are now expecting is for the state government to quickly act, in order to protect the lives of the pupils in the classes. Also, we need a border to demarcate us from our neighboring community in Oyo town. We also need the presence of security agents at the borderland so that people will not trespass into our lands.

What were you into before you ascended the throne as the Allie of Ilie?

I left government service as far back as 1983; I resigned after occupying the position of the principal radiographer of the Obafemi Awolowo University Teaching Hospital, Ile-Ife. I ventured into politics, and was a member of the defunct Unity Party in Nigeria, I contested for the position of the state house of assembly in Oyo state and later became the first elected local government chairman in Olorunda local government. I trained as a radiology technologist at the University College Hospital, Ibadan in 1977. I am still practising my profession.

How do you combine the work as radiographer and a traditional ruler?

I am not a farmer, I can’t farm, I had to be doing something to sustain myself and hence my continual practice.

Today is a very special day for you; you are celebrating your 70th birthday and also marking your 15th anniversary as a crowned King. How does that make you feel?

I feel grateful to God for sparing my life to see the age of 70, which is believed to be the Biblical and Quranic age limit for human beings and if you are still alive while attaining that age, you should be grateful. I was crowned at the age of 55 and I still have a lot to do for my community.

I would like to be remembered for my achievements so far. I have been able to lift Ilie high enough by what I have achieved. We have a customary court, comprehensive health centre, one secondary and five primary schools, many of which were established in the last 15 years. We won a land dispute that has been on since 1918 and when we got to the Supreme Court in 2012, the judgment was in our favour and as a result, over 30 villages were ceded to my domain from the present day Oyo state. My prayer is that I live long to do more for my people.

If additional villages were awarded to your community to constitute Ilie, don’t you think the community would need additional schools and social amenities?

The seat of the local government is at Osogbo, which is about 23 kilometers distance from Ilie. It is difficult for the local government to reach out to all nooks and crannies of Ilie, especially with the ceded villages, courtesy of the court judgment delivered in 2012. I met with Governor Aregbesola and appealed to him to approve the establishment of Olorunda South Local Government Area of Ilie, so as to take care of the Ilie communities. As I am talking to you, Ilie land is currently occupying two over five of the total land mass of Olorunda local government area  and we have additional two ceded wards from that court judgment. So, I believe that for an effective development and governance to get to the grassroots in Ilie, the governor should please graciously approve an area office for Ilie land.

Where do you see Ilie in the next 20 years?

I foresee a small London in Ilie, by the grace of God, with all things at our reach.

Do I go back to him?