I will uphold rule of law, independence of judiciary ― Bauchi gov 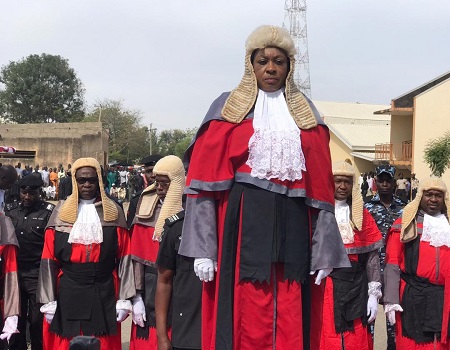 Bauchi State Governor, Senator Bala Abdulkadir Mohammed has assured that as the head of the Executive arm of governance in the state, he will operate within the ambit of the law in order to ensure an efficient justice-sector delivery.

The Governor who disclosed this Wednesday at the commencement of the 2019/2020 Legal Year, also said that his administration will do everything possible to promote the ethics of judiciary and uphold the rule of law.

Bala Mohammed also noted that since assumption into office, he has strived hard to justify the mandate given to him by the people of the state by being prudent, equitable and fair and pledged to remain an advocate of Justice, fair play, Rule of Law and the Independence of the Judiciary.

He stated that ” I will at this point, commend the performance of the judiciary in the disposal of cases within the last legal year, having disposed of about 2 over 3 cases filed. Even though I am not a lawyer but in the legal parlance ‘ Justice delayed is justice denied’ should be our guiding principle”.

The Governor added the “Government is aware that a conducive environment (both office and residential) enhances productivity. To this end, we will continue to execute all ongoing projects at Judges residential quarters, The High Court Complex, Magistrate and other District Courts within our resources”.

In her keynote address, the State Chief Judge, Justice Rabi Talatu Umar said that in order to sanitize the payroll of the judiciary with a view to getting rid of ghost workers syndrome, leakages and wastages, a High Powered Committee has been constituted which has already discovered 55 people as ghost workers who have been drawing from the meager finance of the Judiciary.

To this end, Justice Talatu Umar called on the citizens of the state to come with a genuine complaint on any erring and dishonoured staff as the judiciary is alive to its responsibilities.

On the performance of the judiciary in the preceding year, the State Chief Judge, Justice Rabi Talatu Umar said the High Court has generated N35,682,498.00 as fees and fines while it registered 974 cases as Civil and Criminal.

She used the medium to acknowledge and commend Governor Bala Mohammed for his support and due observance of the rule of law and independence of the judiciary.

On his part, the State Attorney-General and Commissioner for Justice, Barrister Yakubu Bello Kirfi explained that the legal year is an opportunity to improve where the need arises, sustain achievements and initiate new innovations for optimum performance.