I will spend #BBNaija N25m money prize in one week ― TBoss

Entertainment
By Kehinde Bakare On Mar 14, 2017 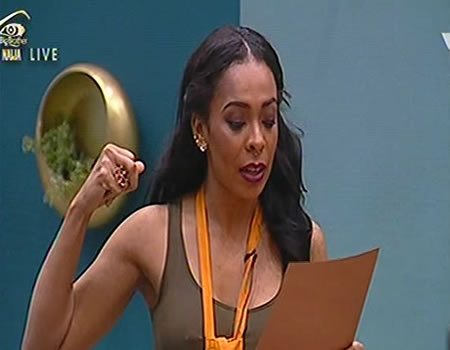 Big Brother housemate, Tboss, has said she could spend N25 million money prize in a week.

She said this while speaking with Efe inside the Big Brother House.

“Trust me, if you give me that N25million, I will spend it before next week. I have guys hitting on me that have private jet.”

“You guys don’t like me, it’s a competition, I’m not here to make friends, I’m done…”

This occurred after she had a heated argument with Bisola over kitchen management.

TBoss, who got cozy with ThinTallTony, whom Bisola was in close relationship with, during the period, Bisola was in ‘Paradise’ with Bally. Unknown to her that Bisola hadn’t been evicted from the house and that she, including Bally, was watching the activities in the house through the Television Big Brother provided for them.

However, TBoss including Bally and ThinTallTony were nominated for eviction this week.

Bally was however saved and replaced with Efe by the Head of House. Debbie-Rise also ended up on the nominees list when Marvis put her up with her ‘power card’, based on Big Brother’s orders.