I will forever cherish my collaboration with Harrysong —Singer Kolaboy

Not many people knew Nwodo Chinonso Victor, an online content creator and student of Institute of Management and Technology, Enugu, but after releasing a freestyle on an internet buzz, “You Didn’t Caught Me,” he eventually caught the attention of so many Nigerians, including former musician and US-based Instagram blogger, Tunde Ednut, as well as Alterplate boss, Harrysong, Phyno, Olamide among others. Signed to Mark Angel Family Records, Nwodo who is popularly known as Kolaboy, is gradually carving a niche for himself. He told Newton-Ray Ukwuoma in this interview about his journey into the music industry, his dreams and aspirations among other things. Excerpts: 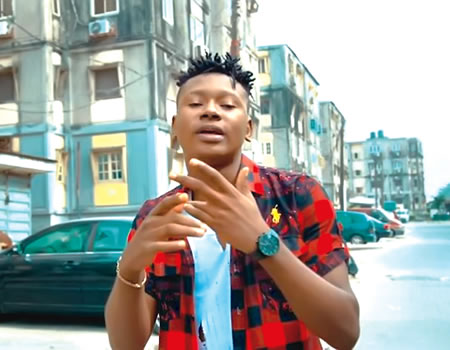 Before Mark Angel Family signed you, how long have been doing music?

I started singing from secondary school. I was doing it independently, until I got signed into MAF music last year.

How did you meet Mark Angel?

I have been very familiar with the family for a long time. I used to be an online content creator, posting short videos and some freestyle on Instagram. That’s how and where we met. He was following me and observing my creativity. There was this freestyle I did at Phyno festival in September, two years ago. He saw it and specifically reached out to me.

What was the first song you did after you got signed to MAF?

The first song was Kola Boy. Then I was bearing the name Onyx but had to switch to Kola Boy.

You changed your stage name to a song title?

Yes, not because the song went viral, but I felt there was need to change my name. I discovered that some other artistes were bearing the name and that the name had some negativity attached to it.

So, how did you come about the Kola Boy song?

One of the first tracks I did independently in secondary school was titled Oji. Oji is kolanut in Igbo by the way. I weaved the song around the Igbo tradition and respect for the kolanut as a way of welcoming visitors and showing them you love and honour them. If someone visits an Igbo family they expect to be served kola. It is their right. And the visitor also has the right to protest if kola is not served. So, I weaved the song around this, calling myself the kola boy, someone who brings good will, love and honour.

Who writes your lyrics?

I write all my songs. Although, when I started it wasn’t that strong. I wasn’t even sounding mature, I was trying to sound like someone else. At a point, I decided to use my real voice, then I became consistent with it. It has been good so far.

I’m a big fan of literature. I try to understand figures of speech and how to use it. I also try to make meaningful sentences with one word. I use wordplay a lot.

Have you considered having collaborations with Zoro and Phyno, the famous Igbo rappers?

They are my close friends now. Phyno invites me to his place. I look forward to working with them on some projects but currently I’m more focused on my singles.

Any plans to release an album any time soon?

For now, no! Just working on singles! When the time for album comes, I’ll make the announcement.

How did you accomplish the collaboration with Harrysong?

‘You Didn’t Caught Me’ got lots of attention on Instagram last year. Like I mentioned earlier, I was an Instagram content creator. Then when I watched James’ (The guy that was arrested by the police over gay accusations) interview on social media, I did a minute freestyle and posted it online. Tunde Ednut reposted it on his page. That was where Harrysong saw it and loved it. He said he would love to be on the song because people were demanding for full track. That was how he came on board. I’m very grateful for that.

Did you pay Harrysong?

No, no one paid anybody. But we shot the video for the song. The video is out there, doing very well.

How did that make you feel, getting popularity within a short period, did you expect it?

I didn’t expect it like this. But I have always dreamt of making it big. It all came like a challenge to me and it gives me this question; what next? So, I had to record a new song entitled, ‘Wire’ as a follow up. Because lots of my fans are expecting more hit tracks from me. ‘Wire’ tells a story about my journey. I had used the track to tell people who Kola Boy really is and all that. It’s a true story. It is also like a prayer, intercession for me and others. The word Wire there means Blessings. Oluwa Wire me.

From Wire one can tell you had a tough upbringing. How has it been for you growing up?

It’s not been easy. But I don’t have any regrets because that’s what brought the rapper they know today. That the motivation. People do ask me how I come up with my lyrics and I tell them that my past motivates me. That’s the honest truth.

What were your parents’ reactions to your new career?

Initially, they misunderstood it but they have seen that I’m all about living my dream. I tried as much as possible to make them believe that I’m doing this for a good intention. They have listened to some of my songs and they contain no vulgar words.

Some musicians use their talents to praise fraudulent acts like cyber fraud. What is your opinion about this?

The truth is I see music as an instrument of airing one’s voice. Music, for me, is telling people my mind and at the same time not trying to influence people negatively. My music is a family brand. It’s something you can play with your family and enjoy. MAF has a standard, so I can’t go against that.

How long have you been in Lagos?

I’ve not always been in Lagos. I come to Lagos when it demanded my attention. I come and go. I might stay, who knows?

Artistes are all about girls, as you’re becoming more popular by the day, how do you plan to manage female fans?

For now I don’t think it’s a problem because change of location has always been an advantage to me. After secondary School in Anambra State, I left for Port-Harcourt, then back to Enugu for my tertiary education (IMT). I’m still in school though, at my second level studying Business Administration. From Enugu, I moved to Lagos. Although, they do try to get across to me but once they see that you are focused, they give you a break.

I am trying to be creative with my past. My main objective is to be able to influence the youth positively. I also I try to tell stories that give motivation to young people especially the ones that are from some rural areas, like my home town.

Who are those top artistes you would love to collaborate with?

I’ve always said that Nigerian music industry to me is too cumbersome. I respect all of them so much. If I’m given the opportunity I would love to work with everyone. I don’t have a specific choice. Everyone up there is doing something unique and great.