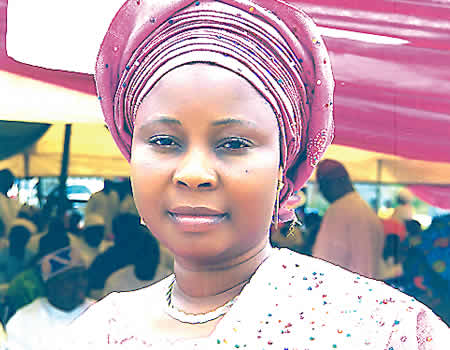 Save for beads, which she sparsely adorns at public functions, there is scarcely anything which announces her as the wife of a traditional ruler. Ask her about her preference for anonymous disposition, Olori Iswat Oluwakemi Adeyanju, wife of the Olororuwo of Ororuwo, Osun State, Oba Qamarudeen Adeyemi Adeyanju, without blinking, her reply would be there is nothing in life to glamourise. In this interview by TUNDE BUSARI she speaks about their journey from Abuja to the throne in November 2016. Excerpts

W HY do you like to appear this simple at all times, except at a few public functions?

I don’t actually get what you mean by being simple. But if what comes to my mind is what you actually meant, I can tell you that being simple depends on the individual.  I am not a flamboyant person, and that has always been my life from the beginning. Through my upbringing, I was made to understand how best to live life without hurting other people, especially those who are at the  lower level. As a Muslim, the religion teaches us that we cannot be equal, and those in higher level should always be compassionate with those under them. This is what I preach. I live a simple life according to how I feel life should be lived.

But as Olori, you are expected to be more sociable. Don’t you think your simplicity would rob you of some social benefits reserved for your status?

Which social benefits are you talking about? If you live above certain things of life, you won’t be bothered about what I think you are referring to as ‘social benefits.’ I am simple as you said earlier and I am okay with it. As long as my being simple does not infringe on another person’s right, and Kabiyesi is not complaining about it, I am okay.

Before your husband became the Olororuwo, did it occur to you that he would ascend to the throne?

To be honest, I did not think of it. Though he is from a royal house, it did not occur to me that he would become the Olororuwo.

Why didn’t it occur to you since you knew of his royal blood?

If you knew Kabiyesi back then, you would understand what I am talking about. Let me even use this opportunity to take you back to what you called my simple life. I want to tell that it was the simple life style that tied us together from the outset. I can even say he is simpler in terms of how he sees life and how he interacts with people. It is easy for people to take him for granted because of this reason. So, I did not see such a simple person making any effort to ascend the throne. What I was told was that only a category of people entered the race and they used all they had to run for the stool. Here was my husband who was living a quiet life with limited social interaction. That was the reason it came to me as a surprise when it was becoming clear that he would be picked.

Aside your being surprised, you would also be excited at the news of his selection. Weren’t you?

You may not believe what I want to tell you as regards your question. Did I even say I was surprised? I was taken aback and almost lost control of myself when the news broke. Ordinarily, one should be happy at such news, given the fact that he was the luckiest among other contestants who were equally entitled to the throne. But as I have said, there are some things that don’t really excite me but which make other people happy. That is me. That is my person. And I am happy the way Allah created me.

Does that mean if you were consulted before he was selected, you would have objected to it?

This question is hypothetical,  so I don’t think I should answer it. How do you want me to answer this question now?

I asked you based on your earlier response, which sounded sincere to me. Would you have consented to his selection were you consulted?

Here you are again. The truth of the matter is that wives of contestants were not involved in the selection process. But if I was asked, I would not have rejected it. I would consider it that he must have been destined to be a king.  I would also feel that God has a purpose for him to be king. Also, I would look at it from what I know about him as a God-fearing husband.

Then you believe in power of destiny. Do you?

I believe in the power of destiny because it is one of the articles of faith in Islam, and being a Muslim, I am expected to believe in all the articles of faith among of which is the belief in destiny. I don’t believe anything will happen to human beings without the knowledge of God as contained in our destiny. You can now see that it is not a question of whether I would support him or not. It is what God has destined him to be.

In that case, I should say you would have agreed to his selection?

I think I have answered that question. And it is clear that I would have consented to his selection to give glory to God almighty.

Weren’t you scared considering the fact that your status was going to change?

To be honest with you, I was under some pressure on what it would take to be Olori. I was almost scared but with time I was able to see the true picture of the palace. It is about your belief and what you do with your belief. I want to thank God for His support so far.

Since the palace is said to be house of opulence, does an Olori need to work again?

I think you are in the best position to educate the public about what you just said. Which opulence are you talking about? Every Olori, who wants to be genuinely respected, needs to work to complement the palace. I am of the opinion that we should realise the enormous responsibilities in the palace and need to always rise up to support our husbands.

Can you expatiate on what you call enormous responsibilities?

The Kabiyesi is in a better position to answer this question because he is the head. The responsibilities on my mind are issues which require the attention of the Oloris. And when you talk of these duties, you talk of money to run those duties. Let me just pray to God to provide for us to have the means to run the palace.

What do you think has changed in you?

Naturally things must change when status changes but I thank God that I am responding well to the changes as they come. But I remain whom I was before the throne as you can see me enjoying cool breeze with Kabiyesi here in the palace garden.  How you want to live your life as Olori depends on you. I mean it is one’s choice. I am accessible to the people of the town. I like to join them when occasion demands. I like to see them and share their good time with them. We are one before God who created all of us. One must be generous and realise that we did not come in to the world with anything and we will not return to Him with anything.

What are your favourite colours?

I love white first before any other. The exceptions are black and red colour. I don’t consciously go for these two colours.

What do you have against black and red?

I may not give you a detailed answer but through movies I observed that the two colours are not often worn for positive purposes. Do you need explanation on my choice of white? Without telling you anything, you know what white symbolises.

I also like jewellery but it does not mean I cannot go out without them. I am again back to what you call my simple style. If you say I appear simple, then you should know that I am not fanatical about wearing jewellery.

‘My husband sneaks out of the house to dodge his responsibilities, returns home drunk’

COVID -19: We want to equip women on new ways of doing business —Okuribido