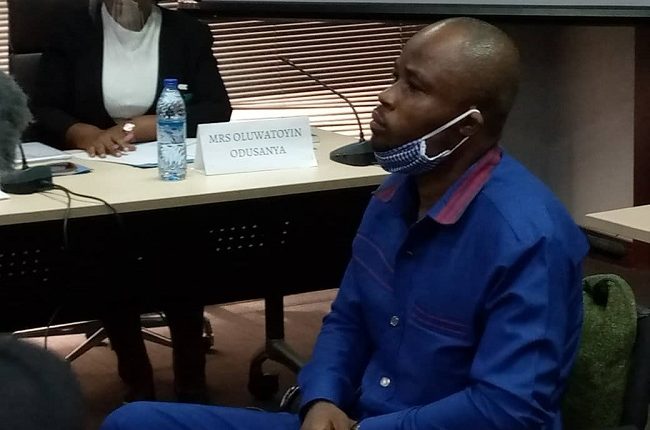 A petitioner, Ndukwe Ekekwe has narrated to the Judicial Panel of Inquiry how he was tortured, stripped naked and thrown from a two-storey building and had his spinal cord broken by officers of the disbanded Special Anti Robbery Squad (SARS).

Ndukwe Ekekwe, who until he was incapacitated, was a trader at the Alaba-Rago market told the panel that SARS operatives led by Inspector Haruna invaded his shops in February 2016 with claims that they had intelligence report with an order from the Inspector General of Police to effect his arrest.

He alleged that they tortured, confined him to a wheelchair and sold stocks in his three shops running into N18m.

He narrated “I was at my shop at Alaba-Rago Market on that fateful day in February 2018 for the day’s sales when some police officers from the Special Anti Robbery Squad (SARS) came to me fully armed. I asked them what they wanted and they said they wanted to arrest me. Why? They didn’t say anything.

This was around 2 pm. I tried to force them to tell me what I have done wrong but they were not ready to tell me anything. I started shouting, I have done nothing wrong but it fell on deaf ears. They forced their way into my shop, scattered all my wares but they didn’t find anything. This time, other traders had come around and they demanded to see their ID cards but they fired their guns and teargas into the air and they all left.

After they ransacked all my shop, I was dragged outside, handcuffed and taken to the Lagos Police Command, Ikeja.

At Ikeja, I took out my phone to call my mother but as soon as I was sighted by one of the officers, he hit my hand and head with a gun butt and I was dragged out of the van into the torture room where I was stripped naked and tortured and treated like a criminal without telling me what I had done wrong.

I was persistent to know what I had done wrong and they told me they had an order from the Inspector General of Police to effect my arrest. They said they had an intelligence report on me. After I was thoroughly beaten, another team came around and began another round of beating. They later asked if I should be killed and the man I later know as Inspector Haruna said not yet.

The following day around 8 pm, I was taken back to my shop with my hands and legs chained. They broke into the shops, brought out my wares and sold everything to traders and passersby. I lost all the wares in my three shops worth N18m.

While they were doing this, I started shouting to attract the attention of passersby and fee of the traders around. When they discovered that I was agitated, the commander ordered one of his boys to keep me busy and he pushed me from a two-storey building to the ground.

That was how my spinal cord was broken. I fell to the ground unconscious. My mother told me that I was dumped at the police college.

I was taken to Igbobi Orthopedic Hospital but I was rejected and was later taken to Lagos University Teaching Hospital, LUTH where I was operated upon.”

Chairman of the judicial panel of inquiry, retired Justice Doris Okuwobi admitted as exhibit X-ray from the police college hospital in Ikeja, hospital Bill, list of phone numbers of police officers, picture of the petitioner with a bandage on his head.

Further hearing on the matter has been adjourned to November 13 by the judicial panel.