I was tortured for refusing to pay SARS officers N5m, petitioner alleges at NHRC panel 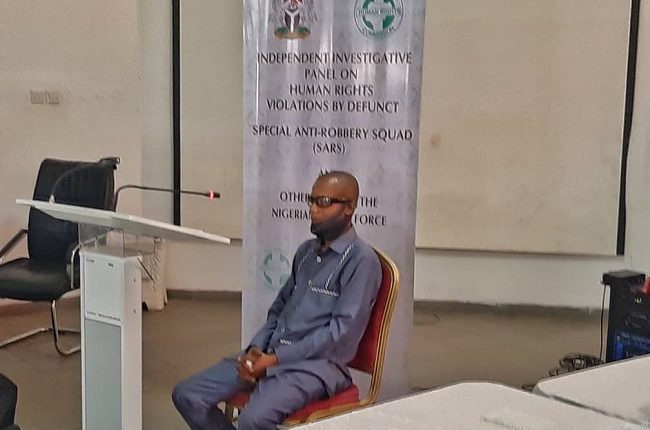 A petitioner before the National Human Rights Commission (NHRC) independent investigative panel on violations of rights by defunct Special Anti-Robbery Squad (SARS) and other police units, Timothy Ogbeye, on Wednesday, alleged that he was tortured by SARS operatives in Anambra State for refusing to pay them N5million demanded from him.

Ogbeye stated this while giving evidence before the panel in his petition before it, marked 2020/IIP-SARS/ABJ/120, in which he alleged unlawful arrest and detention, a threat to life, assault, torture, inhuman and degrading treatment and the right to his property against the respondents in the petition.

According to Ogbeye, he was arrested in Abuja together with his two brothers and taken to Anambra State where he was severely dealt with by SARS operatives.

He informed that he was detained in Cell 4 and was beaten with 2 X 2 wood severally by SARS officers.

“On the third day, I was brought out and Patrick Agbazue told me that if I want peace, I should pay N5million. I told him that I don’t have such money. He then ordered that I should be taken back into the cell,” Ogbeye told the panel.

He said Andrew James ordered the “commander” of Cell 4 to torture him until he was ready to cooperate, adding that he was thoroughly dealt with in the cell.

He added that while in detention, his parents visited the SARS office in Anambra State but were not allowed to see him.

According to him, he dragged the police before the Anambra State High Court, which first ordered that they should produce him in court, which was not complied with. The court, he informed, later ordered that he should be released by the police.

“Two days after, they killed Obinna and seven others,” he alleged, adding that he was released after spending four months in detention.

The petitioner, therefore, urged the panel to use its power to compensate him to the tune of N10 million for the injustice, torture he suffered at the hands of SARS.

“I want justice because I have been suffering. My eyes saw pepper in that place,” Ogbeye told the panel.

When cross-examined by police counsel, the petitioner said he did not know if Obinna Michael was a notorious armed robber, adding that the vehicle he bought from him (Michael) was the first he sold to him (Ogbeye).

Ogbeye, who claimed to be a car dealer and granites supplier, had on February 22 when his petition was first heard had slumped while testifying before the panel, forcing the panel to adjourn the hearing till March 24. He was then taken to the hospital after he was revived.

While narrating his ordeals in the hands of the SARS operatives, the petitioner, informed that he was arrested on January 22, 2020, in Abuja with the sum of N1.5million he had on him that day to pay for granites.

He said that apart from been beaten by the policemen who effected his arrest, they also took five cars, including a Toyota Venza from his stand.

In spite of the huge investment in the water sector by the government and international organisations, water scarcity has grown to become a perennial nightmare for residents of Abeokuta, the Ogun State capital. This report x-rays the lives and experiences of residents in getting clean, potable and affordable water amidst the surge of COVID-19 cases in the state. I was tortured for refusing to pay SARS

Nine years after judgment, plaintiff cries out for execution

ALGON crisis deepens as IMC disassociates self from Abuja meeting