I want to go back to my parents, says child-wife accused of stabbing husband to death

•She had fear of first-time sex —CP 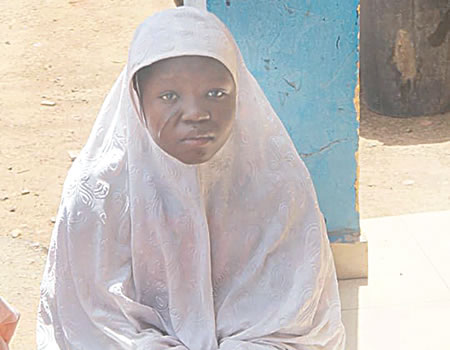 Salma Hassan, the child-wife, who allegedly stabbed her husband to death in Itas/Gudu Local Government Area of Bauchi State, has told newsmen that all she wants is to be returned to her parents even as she said she didn’t know why she was taken to the police station.

When she was asked what she thought her offence was, Salma told Saturday Tribune at the police station in Hausa; “Oho, ní ban sani ba, ní dai an kawo ni nan (oho, I don’t know, all I know is that I was brought here). Asked further what she wanted to be done to her, the girl, who looked 12-year-old, said, “ni dai a maida ni gidan mu” (all I want is for them to return me to my parents).

Salma said she did not know that having sex was part of marital obligations, adding that she thought her late husband was trying to defile her based on what she was told by her parents.

She disclosed that her parents had always warned her never to allow a man to touch her no matter what.

Salma said further that “I didn’t know that sex is one of the marital obligations. On that day, when he approached me for sex, I refused him because I had never been involved in it before. I thought he wanted to rape me but he got angry and was trying to force himself on me with beating. I picked up a knife to scare him away but he kept coming and I didn’t know when I stabbed him with the knife in his chest.”

The girl was married to her late husband, Mohammed Mustapha, and they both resided in Itas/Gadau LGA of Bauchi State.

She was paraded alongside other suspected criminals by the Bauchi State Police Command.

She further explained that she had already given her statement to the police and did not know what would become her fate. She added that she wouldn’t have done it if she knew better about marital obligations.

The Bauchi State Police Commissioner, Philip Maku, alleged that she stabbed her husband to death over fear of first time sex.

Maku added that the girl said that she had no idea of sex education and experience of marriage saying that she allegedly used a knife to commit the crime and she was arrested for culpable homicide at her home in Itas-Gadau Local Government Area of the state.

The Police Commissioner said: “On April 24 at about 9:00a.m., one Haruna Musa, of Itas-Gadau reported at Itas-Gadau Division, that one Salma Hassan, aged 18 of the same address stabbed her husband. The husband, Mohammed Mustapha, was stabbed on the chest. As a result, he sustained a serious injury and was rushed to General Hospital, Itas–Gadau for treatment where he was certified dead. The suspect was arrested and has confessed to the crime. Exhibit recovered from the suspect was one knife”.

While reacting to the development, a Child Rights activist in Bauchi faulted the police for parading her amongst suspected criminals knowing that she is a minor, and held that she has protection under the law.

The group called on the police to immediately stop parading her alongside criminals.

The activist who did not want his name mentioned said that from the account of the minor, she was not at fault because her parents did not properly brief her on her responsibilities as a housewife, stressing that such issues were the reasons for the domestication of the Child Rights Act.

He stressed that she should have been taken to a juvenile home instead of the Police Command headquarters where she is being detained with criminals.

He called on human rights activists to rise up to her defense.