I want to be remembered for a good name, not wealth —Sir Kesington Adebutu 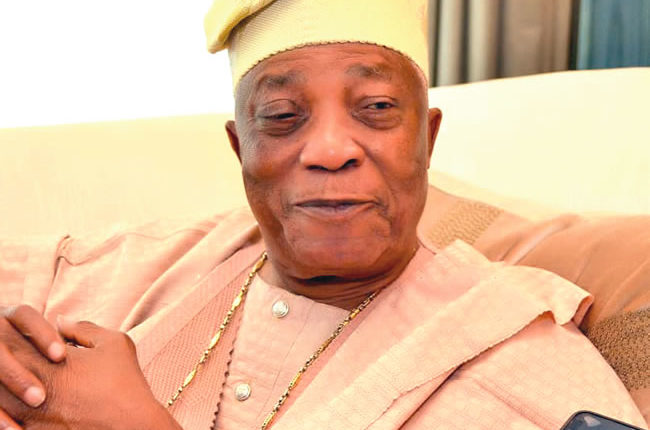 The Asojuoba of Lagos, the Balogun of Remo and the Odole Oodua of Yorubaland, Sir Kesington Adebukunola Adebutu, clocks 85 today.  The renowned businessman speaks with Akinrolabu Akinduro about his life and living.

It is the belief of many that you became wealthy because you were born with silver spoon?

I was not born with a silver spoon in my mouth, not even a wooden spoon.

So, how did you come into wealth?

I would say that it is by the grace of God. As I said earlier, I was not born with a silver spoon in my mouth. The truth is that as soon as I left school, I started working with Cable and Wireless, which is known today as NITEL. There I was in charge of international calls and this gave me the opportunity to have the contacts of people of affluence.

So, early in my life, I had contact with affluent people. I soon had contact with a company which employed me as a salesman and because I was hard-working, I was promoted as the sales manager for Lagos and the whole of mid-western states. Later, I stumbled on a book which said any job you are doing, one day you will leave it either by way of retirement or through sacking. I also read in the book that if you have a business of your own and you later leave it, you leave it for yourself. These words motivated me to think of a business I could do on my own. But then again, the capital was not there for me to start. I had no money and so it became difficult to start a business. But I thank God that it came to my mind that the only business I could do with very little money was to be a pool agent. As a pool agent, all you need is a small table and a pen. That was how I started. I had a humble beginning and God blessed it.

What inspired ‘Premiere Lotto’, the registered name of your business?

For your information, I didn’t start with Premiere Lotto. As I said earlier, I started as a pool agent and with my education, I took statistics weekly on how much sales I made and how much profit I realised, and then I realised that it was a good business. From a pool agent, I became a pool promoter with so many agents working for me. That was the beginning, and it was from there I diversified to other businesses.

What other businesses do you do apart from lotto?

I went into casino, property development and insurance.

You are officially 85 years old today. What is the significance of this to you?

To me, it is a landmark but the only regret I have is that I cannot celebrate it the way I want because of the current situation in the world and in our country with regard to the COVID-19 pandemic. The birthday is going to be strictly celebrated through zoom. Nonetheless, I thank God for His mercy.

What were the challenges you faced before attaining this enviable status?

There is no way a man won’t have challenges. In those days, in the 60’s, the pool business was dominated by Lebanese. So, it was a big challenge for my company to have breakthrough. I must thank Nigerians because when my company came on board and they saw it as an indigenous business, they rallied round me. They gave me a huge support. All the agents in Nigeria supported me.

Recently, you were honoured as the Odole Oodua of Yorubaland by the Ooni of Ife, Oba Enitan Ogunwusi. How do you feel about this title?

Some time ago, it was reported that you were offered the title of the Aare Onakakanfo of Yorubaland but you declined the offer. How true is this story?

You are also renowned for your philanthropy. What is the reason for your benevolence?

I mentioned earlier that I was not born with a silver spoon but today, I have got a diamond spoon in my mouth by the grace of God. I believe that the only way I can appreciate God for His blessings is to give back to the people, especially the underprivileged, given the fact that I was once in that position.

Well, I thank God for His mercies. There is no way there won’t be ups and downs in the life of a man, but God has been so kind to me and I thank Him.