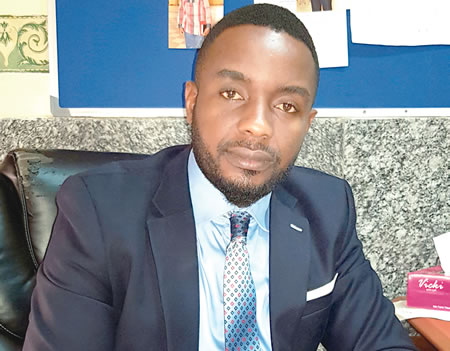 Growing up was very difficult for Mr. Collins Ezem, the current Maltina Teacher of the Year award winner. Though he was not born into a poverty-stricken home, the demise of his father, an industrialist, made things worse for him and his siblings.

“I was nine years old then and in primary five, and my mother (then and still a local hairstylist) had no money to take care of us, including sending us to school,” Ezem, now 38, told Saturday Tribune. “So, I had to think of what to do on my own to get some money and augment the family purse.”

Ezem, third child in a family of six children, then became a street hawker selling nylon bag and bread. He did this for some years before changing to bus conductor –all in the city of Kaduna, Northwest Nigeria.

Through personal efforts, Collins was able to raise some money to further his education.

“I went back to school, but I couldn’t complete SS3. While I continued with my bus conductor work from morning to 2:00pm, I went to tutorial centre for evening lessons to prepare me for the West African Senior School Certificate Examinations (WASSCE) as an external candidate. And I sat for WASSCE up to five times before I was able to obtain enough credits to gain admission to the Federal College of Education, Zaria, to study Religion and Primary Education Studies,” he explained.

Mr Ezem, from Abia State, graduated from the college in 2004 and then sought admission at the Ahmadu Bello University (ABU), Zaria, for a degree programme in the same education course. While in school, he was into part-time teaching for a fee. The money he realized from that he used to support his further education and feeding.

“It wasn’t an easy experience. I tasted real poverty and hardship. At times, I would sleep on empty stomach and wake up without knowing how and when to get my next meal, let alone afford new clothes,” he recalled.

Though he had no plan originally, according to him, to go to college of education as a church member encouraged him, he soon started to fall in love with the teaching profession, especially during teaching practice.

“I was so passionate that I always looked forward to teaching practice, and later, I began to teach on part-time basis in private schools for a fee. By the time I went for my one-year mandatory National Youth Service Corps (NYSC) programme, I was already deep in it and convinced I would not only be a teacher but professionally chartered,” he said.

So, as Ezem completed his NYSC programme, he opened up a tutorial centre (where he prepared students for WASSCE, Unified Tertiary Matriculation Examination and so on) in Kaduna.

His tutorial centre was already blossoming when the unexpected happened. Boko Haram terrorists began to unleash terror indiscriminately on the people of Kaduna and some other parts of the North on frequent basis. That was between 2010 and 2012, and the schools, including tutorial centres, became soft targets for the dreaded group.

“That was how I relocated to Abuja, the Federal Capital Territory,” he noted. “But it wasn’t easy in Abuja to secure cheap accommodation, unlike in Kaduna, for my tutorial centre.”

While both WAEC, NECO and government schools did not invite him for interview much less offer him a job, many private schools did. He soon moved from one school to another before he finally settled with the Royal Family Academy, Wuye, Abuja, his current employer, as Civic Education and Christian Religious Studies teacher.

What drew him to teaching was not money but fulfillment; after all, Nigerian teachers are generally among the most poorly paid globally.

Today, and in less than a decade on the job, Mr Ezem now has a Master’s degree, and has walked into stardom as a master teacher. His 2019 Maltina Teacher of the Year (MTOY) award, fifth in the series, has made him one of the few multi-millionaire secondary school teachers at his level now in Nigeria. The Nigerian Breweries Plc identified him just as it has been doing in the last four years among secondary school teachers through its social arm, the Felix -Ohiwerei Education Trust Fund.

His emergence was announced at an award ceremony in Lagos in October with many leading voices in the nation’s education sector, including the Minister of State for Education, Mr Chukwuemeka Uwajiuba, who represented Vice President Yemi Osinbajo, in attendance.

MTOY award is open to all Teachers Registration Council of Nigeria-registered teachers in both public and licensed private secondary schools nationwide. A total of 1,310 teachers (against 641 of 2018) competed this year, and the number, according to the organisers, was the highest in the history of the competition.

They told Saturday Tribune in separate interviews that the award had changed the lives of their families, students, colleagues, schools and the education sector in general for better.

Just like his predecessors, Mr Ezem was rewarded with N6.5 million in all – a N1 million as overall champion; N500,000 as a state champion and N5 million to be spread equally across five years as long as he remains in teaching. He is also entitled to all-expense paid overseas training and his school (with a student population of about 1,000) will get a block of six classrooms for producing him.

The first and second runners-up, Messrs Soji Megbowon from Lagos State and Fidelis Ochono from Katsina State along with 23 state champions (11 states failed to meet the minimum benchmark to produce winners) were all given cash rewards ranging from N1.25 million to N500,000 and a certificate.

Saturday Tribune, however, found out what makes Ezem standing out in the same system many of his contemporaries blame for ineffectiveness is that he does not see poor remuneration and welfare package which characterise majority of private schools in Nigeria as challenges big enough to affect his performance.

He does not also believe in being a conventional teacher who cannot think outside the box to create wealth for additional incomes. Ezem does not teach students alone; he teaches parents on children’s social behavior, and trains teachers on effective teaching and methodologies. He is also a part-time pastor and works as a compere. No wonder he vows never to quit teaching while investing his money on education and charity work.

His wife, Ucheoma, whom he said he cherishes so much for her understanding and steady support from their courtship days affirmed these virtues in a telephone conversation with Saturday Tribune.

Ucheoma, a staff nurse with Garki Hospital, Abuja, said her husband, whom she described as a go-getter, works seven days of the week and sometimes till late in the night.

“He is well-organised, resilient and purpose-driven, combining his multiple roles including at home comfortably without them conflicting,” she noted.

The principal of his school, Mrs. Adebola Oluboyo, equally testified to Ezem’s capability, calling him a genius and a model.

“We all proud of him. He is not just a teacher but a teacher who contributes hugely to the success story of the school and the people in the host community,” she added.

Speaking at the award ceremony earlier, the managing director, Nigerian Breweries Plc, Mr Jordi Borrut Bel, reaffirmed that the company with the philosophy of ‘Winning with Nigeria’, initiated the award as a social intervention to identify and celebrate exemplary secondary school teachers to boost service delivery and education development in Nigeria.

How do you cope with a drunk as partner?