I started my orphanage with set of twins, they are now the ones running it —George

Rev (Mrs.) Dele George, the first child the late Major-General Samuel Ogbemudia, is the Founder, Little Saints Orphanage in Lagos State. In this interview with EMMANUEL UDOM, she recounts her growing up years inside army barracks, among others. 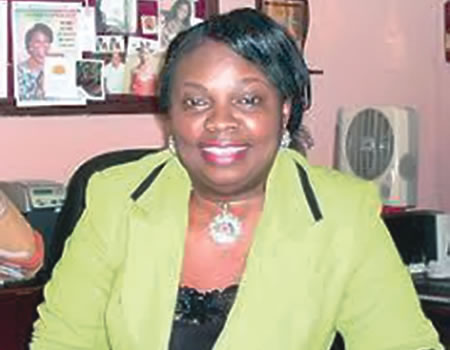 AS the first child of an army officer, How were those years living in the barracks?

I was very young then, I only remember the cluster of reflective green tin-huts called army barracks in Kaduna. My father told me I lived a hard life because he did not have money to buy me infant formula, so I took pap. Eventually, we moved to Benin where I lived with my grandmother.

Apart from being a military administrator, there should be the other side of your father the public has not known. Was he very tough at home?

He was a disciplinarian. Yes, we got a few strokes of the cane from time to time, but it was not excessive. I was always in awe of him, especially when he was in uniform. In those days, the presence of soldiers brought about obedience.

Dads usually have soft spot for girls. Were you daddy’s girl?

My father loved all his girls, but he celebrated his boys more just like an Edo father would do even to this day.

So it is safe to say you later acquired silver spoon being his daughter?

I was born when he was just a sergeant in the army living in the barracks, but I acquired a silver spoon later when he became the administrator of old Mid-West and we moved to the Government House. However, my father never allowed us to enjoy the opulence of the State House. I still took public transport to visit my friends despite the fact that there were official cars. My friends and I did not understand him then.

You studied Accountancy at the Ahmadu Bello University. Why ABU and how much of university days did you enjoy?

I chose Ahmadu Bello University while I was in Mary Mount College in Agbor and was very lucky to have been given admission into ABU for Basic Studies, which was equivalent to A- levels then. My sojourn in the university was great and adventurous. It gave me an opportunity to visit many states in the North. I loved it in our Zaria Congo campus. I met my husband in Zaria while he was in Nigerian Aviation Flying School. I graduated at 21.

How much resistance did you give Captain Jide George before you agreed to marry him?

I kept him waiting for about a year before we dated and then said ‘yes’ four years later.

Is there anything he has been trying to change in you?

After 41 years of marriage, we must have influenced each other a lot.

At what point did you start the Little Saints Orphanage?

I got born again in 1986 and got inspired to reach out to vulnerable children in our society. God spoke to my heart.  He said; “Take care of my orphans.” I answered the call by using one of our properties in Egbeda for the orphanage. We started with a set of twins. Today, the twins are helping run the orphanage.

Can you tell us the number of children that have passed through Little Saints Orphanage?

Over 1,000 children have been raised, rehabilitated and reformed by our orphanage in the last 25 years. Some were on short term basis and others on long term basis. Little Saints Orphanage inspired adoption of children in Lagos State, which later spread to other states in the country.  Today, we have 210 children in six homes in four states.  Lagos in Lagos State, Warri in Delta, Ibadan in Oyo State and Itele in Ogun State.

There is the likelihood of getting emotionally attached to a couple of them. Can you share the experiences of your physical parting with such children, whether due to adoption or growing up and leaving the orphanage?

There was a lot of weeping in the orphanage when we did our first adoption in 1996. We felt saddened that the child was leaving us, but we understood it was in the best interest of the child. These days, we actually rejoice when they get adopted because the benefits of adoption both for the child and the adopters are numerous.

What is the process of adoption?

Adoption varies from state to state. The process begins with the government, the Ministry of Women Affairs, or Ministry of Gender Affairs or Ministry of Youth and Social Development in the states. Anyone who wants to adopt has to process their application through them. Once they are approved, the adopters get approval letters to approach any orphanage of their choices. When they come to Little Saints Orphanage, we give them a child based on availability. I must stress that Little Saints Orphanage does not charge for adoption because children are not commodities, but gifts from God. If any orphanage is charging money for children, then they are illegal and criminal.

Does the government charge for adoption?

Is there a specific age for children not adopted to leave the orphanage?

Children are meant to leave the orphanage as soon as they attain 18 years, but as long as they are still going through the rigours of education, we cannot throw them out because they have no other family but us. Majority of our young adults are gainfully employed and living in their own apartments.

There must be a memory you want to leave behind after concluding your race here on earth.

What is ASOHON? We have heard so much about this association?

ASOHON is the Association of Orphanages and Homes Operators in Nigeria that was formed by my co-operators. In 2009, we came together to destroy the stigma surrounding orphanages, to eradicate fake orphanages and baby factories around the country. We are determined to raise the standard of care in all homes across Nigeria as well as raise the status of the orphan child.

Can we also call you a fashionista?

I dress moderately. I wear what I am comfortable in, whether it is in fashion or not. I do not follow fashion trends.

The train to Tangier