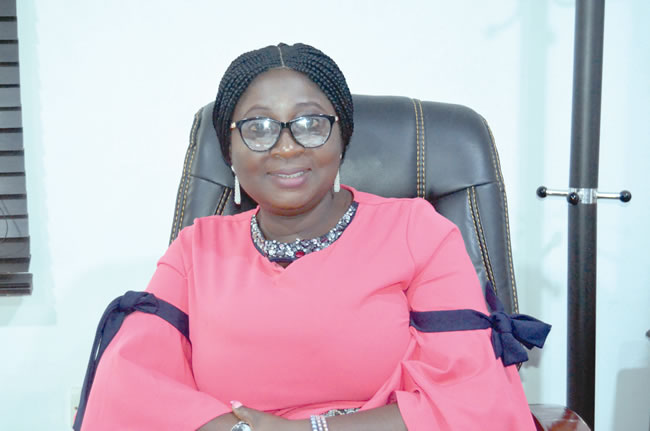 Ekiti State Commissioner for environment, Princess Iyabo Okeimein, in this interview by FEMI OGUNTAYO, talks about her appointment as commissioner in Ekiti State, women leadership and other issues as they relate to women development in Africa. EXCERPTS:

When you heard about your appointment as Commissioner in Ekiti State, how did you feel?

Let me be honest with you, I was very surprised. At the same time I was very happy, and then lastly I was also kind-of apprehensive because I know it is a huge responsibility that I was so careful, I don’t want to fail. Then I prayed to God to help me so that Mr. Governor, Dr. John Kayode Fayemi who has appointed me and his amiable wife, Erelu Bisi Fayemi will be proud and be happy that they haven’t made the wrong choice.

As a legal practitioner, how do you intend to work effectively in this ministry? Do you have any background in formulating environmental policies?

Well, like I’d say, I am experienced. Though, it might not be a physical experience, but I have an educational experience because in law, we have an aspect called environmental law. When I had my first degree in law, I was quite familiar with that aspect of the course. Mind you, law wasn’t my first degree; I had a Bsc in Sociology, since 1990, then I did masters in public administration in 2013. So the law degree is even the latest, I was called to the Nigerian bar in 2018. Now I am running my Masters Degree in Law at the Ekiti State University and one of my core courses is environmental law.

How have you been combining your duties as a public servant with your family duties as a mother and wife?

I would say, to God be the glory. I joined politics in 2006; this is my 14th year in the political space and I must say a big and special thank you to my husband. I from Ekiti State, he is from Edo State, though we met in Lagos, we got married and started our lives in Lagos. I had my first child in 1997, we got married in 1996, and then I had my second child in 1999. The first one is a girl and the second is a boy. If you subtract 1996 that I got married from 2006 that I joined politics, that is 10 years. So, I can say that, my being in the home 24/7 reduced when I joined politics because most of the time, I have to be here. In 2006, I came to Ekiti, contested for house of assembly, which was my first point of call, I didn’t win and in Ekiti here, there is a saying that ‘you cannot play politics in absentia’, so for you to make any mark in politics, you have to be on ground and be physically present. So I thank my husband specially, for his love and sacrifices, as he covered up for me at home throughout these periods. Before, I could be in Ekiti today and still returned to Lagos that same day, but when I was SSA to the governor, sometimes I only travel home twice in a month, now that I am commissioner, I have not even gone home, (laughs). These days, he is the one who comes here. I must give him the credit.

(Laughs) Before anything, I see myself more as a politician.

Talking about women development, why do you think we do not really have a lot of women in power in this part of the world – Africa?

It is in two folds; first one is that, many of our women in politics don’t really develop themselves academically. Kudos again to Governor Kayode Fayemi once again, his own government is not the type that will put someone who doesn’t even have more than a secondary school certificate in the House of Assembly, what type of laws would such person pass if given the position? Mr. Governor is well read, he is a PhD holder and he always loves to put a round peg in a round hole. However, unfortunately, when it is time for women in politics, for a governor like that to appoint one of them, he is always at a loss as to finding someone qualified among them to appoint. That is one factor. In the past, women were always seen as singers, dancers and praise-singers; they were always useful during campaigns and elections. But after elections, and a governor emerged, they were nowhere to be found, because many of them were not qualified. So I want to really beg and encourage our women in politics to develop themselves. I want to think, though it might not be the factor, but I will want to think that, if I had not gone for my law degree, probably I wouldn’t be sitting on this seat as commissioner. I want to tell you, I was 50 years old when I got my law degree, I sat with my children’s age mates, wrote JAMB and GCE. I never stopped learning, because I know I was doing it for a purpose and I thank God that the purpose is manifesting. So, I want to tell our women, it is never too late, go and shake your certificates because; success comes when opportunity meets preparations. The second factor; I must firstly appreciate the wife of our governor, Erelu Bisi Fayemi. I always say, if all other first ladies in Nigeria can be like her, women development in this country will be guaranteed. This is a woman who is very confident, very high self-esteem, someone who has developed herself to an enviable level and she is a woman that is not threatened by the success of a fellow woman. She is up there and also helps other women come up. Before now, what is obtainable amongst women is what we call PHD – Pull Him/Her Syndrome, but for our mother general like we call her, she is not like that. So, her influence in Ekiti State has given a lot of women leverage. We have leveraged on her being up there to get to where we are. That is why for instance in Nigeria today, Ekiti state can proudly boast of having the highest number of women in the house of assembly in the country.

At the national level, would you say the women are well represented in this present administration; in terms of governance?

I may not be able to talk about the national level, but never the less, there is a saying that, the largest room in the world is that one improvement, what is happening, we are happy about it, but we can actually do better. Though, it has never been this good.

Talking about your ministry now, the vision of the ministry of environment in Ekiti is to ensure a clean, safe, healthy, green and beautiful Ekiti State, how do you plan to achieve this?

Thank you very much for that question. Since I got to this office, I have done several consultations, because by the virtue of what is happening in the world today, it is a notorious fact that is obvious even to the blind that the world is experience a global economic meltdown, which is affecting every facet of the society. It is time to put on our thinking cap; it is time to think outside the box. This is not a time where we do things the way it has always been done, and think you will get a different result. So, in the light of this, I have been thinking outside the box and I have been looking for ways whereby I can achieve results, using new systems, exploring areas that have not been explored before and going the extra mile to get things done and it must be done and we must deliver, so that the goals and vision of this ministry must be actualized.

Coming into office midway into the 4-year term of this administration, how do you intend to do better than your predecessors?

When you come into office in the middle of a term like this, the best thing is to look at what your predecessor did and look for ways to improve on it. I know time is of the essence, but I know with God and the help of everyone in this ministry, we will rely more on the millennium demands, we need to rely more on the internet, some of our system are obsolete, we need to upgrade and get better results than my predecessor. We will also work with our national our international partners in achieving our plans.

Do you think Ekiti State can have female governor anytime soon?

(Laughs) Well, I am a Christian and my bible says, with God, nothing shall be impossible. I know that in Nigeria, having a female leader is something that has not fully evolved but I know we will get there. In most APC governed states, I know there are spirited efforts to make women deputy governors and in Ekiti state for instance, we have had three female deputy governors and I know that in no distant future, by the grace of God and by the continued efforts by our female leaders in the state, it is achievable.

I can’t sleep well at night