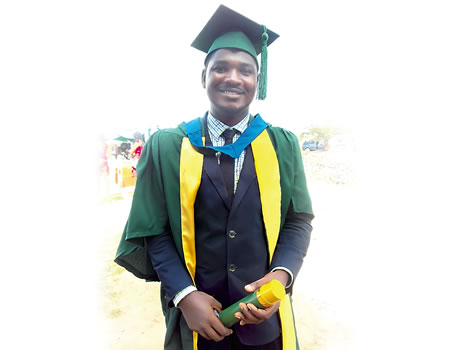 Anambra State-born Modebe Joshua is the 2016/2017 best graduating student of the Federal University, Otuoke (FUO), in Bayelsa State. With a First Class honours degree in Sociology/Anthropology, Modebe was awarded the Vice Chancellor’s Prize during the maiden convocation ceremony of the institution on September 2, 2019. In this interview, he told EBIOWEI LAWAL how he worked his way up to the top of his class.

How did you get to Federal University of Otuoke?

I would say I found myself in Otuoke because of the general drive for admission. After writing JAMB for about seven times without admission, I was ready to apply to any university that was ready to admit students like me. So, I chose Otuoke and was given the admission to study Sociology and Anthropology. But when I came, I learnt that somebody made several attempts to switch my name for his but the person in charge of admission declined, saying there was no need because I had a better SSCE result. I think that gave me the impression that the university operated a merit-based system, and that is what I expect other institutions in Nigeria to emulate.

When you first came to Otuoke, considering it was a new institution, were you disappointed with what you met on the ground?

I wasn’t disappointed. I was amazed by what I saw. The classrooms were tiled, air-conditioned and had projectors that aided learning. It was a state-of-the-art university.

Why did you choose to study Sociology and Anthropology?

When you came to Otuoke, what was your target?

And today you have achieved that dream. How did you do it?

First of all, I thank God for His grace. I would also want to say that focus played a major role all through my stay in Otuoke. If you are not focused, you can get easily distracted. Like I said earlier, my focus was to get a first class degree and leave. I did everything possible around that focus. I studied hard, bought books, did my assignments on time, attended classes and made sure I did extra studies. Some persons go to class to get what the lecturer says, and when exams come, they give the lecturer same thing. To me, that isn’t a formula for success. I read more than what the lecturer gave me. I did broader studies, so that while everybody in class is saying ‘one plus one is two’, I am explaining why one plus one is two.

What were other challenges you faced in the quest to achieve your aspiration?

I had to juggle work and school at the same time because I needed money to fund my academic pursuit. And my work took me out of town from time to time. I am the Programmes Director of Nigeria Spelling Bee Competition, which is a national programme that requires me to travel round Nigeria. But I made sure my work activities were scheduled for weekends.

How were you able to manage academics and work?

I would say time management is key. One of the major things I did was to try as much as I could to deal with issues immediately they came. I made sure my academic activities didn’t suffer for other interests I had, like work. Over all, I made sure my holidays were well utilised because holiday, to me, was not a time to rest but a period for academic work.

Did you at any point feel threatened that the performance others in class could beat you to your dream of getting first class division?

In my first semester, year one, I did get threatened by the performance of Cynthia Emami, the best graduating female student. In one assignment, Cynthia scored 19 over 20 and I scored 18 over 20 points. So, I felt if she could score 19 over 20 points, I could have scored 25 over 20 points in that assignment. In that same semester, she got a 5.0 CGPA, while I got 4.87 CGPA. I got only one B in that semester while she got A in all her courses. I realised then that I didn’t work hard enough. Her feat bothered and forced me to work extra-hard. And I am bold to tell you that after that semester, I maintained a 5.0 CGPA until I graduated from school.

How did you manage distractions that usually come from students of the opposite sex?

First, I would say that you will only have distractions from the opposite sex when you are attracted to distractions; because if you have a plan, you will not allow drugs, cultism or women distract you. I actually didn’t have a girlfriend from year one to final year. That is not to say that one cannot have a girlfriend and do well in academics, but it is a matter of choice. I made the choice not to have one or have special interest in them.

What would you remember most about Federal University of Otuoke?

The fact that everything is done on the basis of merit is one thing I will never forget. FUO is not like some institutions where lecturers compel students to buy their books or handouts to pass exam. I could remember the vice chancellor giving the directive that if any lecturer wants a book to be a compulsory read, such lecturer should request the university to buy the book and stock it in the library, so that students who cannot buy the book can always go to the library and have the opportunity to read it.

Of SCOAN and the living water experience