I regret taking my pastor’s advice, woman who killed mum over witchcraft says 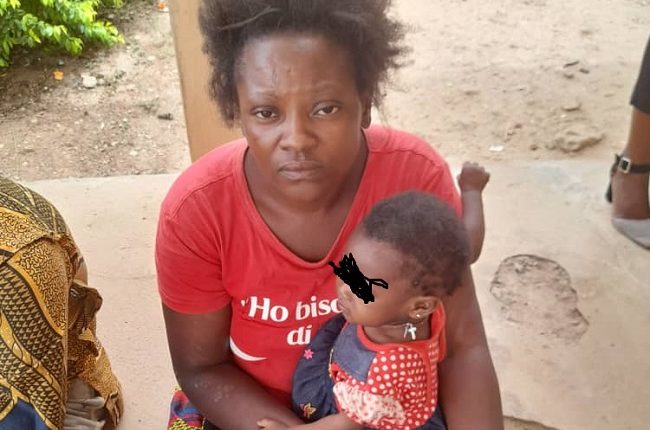 A 30-year old woman, Blessing Jimoh, arrested and paraded by the Ondo State Police Command has expressed regrets for killing her mother, Ijeoma Odo, saying “I regret taking to my pastor’s advice to kill her.”

Blessing, who confessed to killing her mother with a cutlass following the revelation by her Pastor that her mother was a witch and responsible for her insanity.

Speaking during her parade, Blessing explained that she had been battling with mental illness and approached the pastor for spiritual cleansing when the pastor confirmed her mother behind her problem.

The mother of four who hailed from Enugu State said she pleaded with her mother to set her free from the sickness but the mother denied having a hand in Blessing predicament.

The suspect who claimed to be mentally unstable said she followed the deceased to the farm in Ile Oluji, in Ile Oluji/Okeigbo Local Government Area of the state where she hacked her to death when she was working on the farm.

According to her, she attacked the deceased and use the cutlass to cut her neck, killing her in the process.

She said: “My Pastor made me kill my mother after the pastor told me that my mother is a witch and the one behind my insanity.

“I went to my mother to appeal to her and begged her to free me from the affliction but there was no changes and I decided to kill her when we were working on her farm.

ALSO READ: PDP loss in 2019 poll has taught us a big lesson ― Baraje

“I have no intention to kill her but when the Pastor said she’s responsible for my insanity, I have to kill her to regain my sanity.”

She said the whereabouts of the pastor remained unknown after she committed the crime saying “we have been looking for the pastor but we have not seen him.”

The Ondo Police Commissioner, Mr Bolaji Salami, said the suspect was arrested “after one Odoh Tochukwu of No.3 Adekiya Street, Ile-Oluji reported at Ile-Oluji Police Station that his mother, Mrs Ijeoma was attacked on her way to a farm by unknown assailants.

“He further stated that he suspected the duo of Jimoh Blessing and Tope Blessing to be behind the murder.

“Detectives of the Division immediately went to work, where both suspects were apprehended. Jimoh Blessing, the daughter of the deceased has confessed that she killed the mother.

“Case is currently with the SCIID for discreet investigation and would soon be charged to court after investigation.”

I regret taking my pastor’s advice, woman who killed mum over witchcraft says