‘I prostrated, begged my wife, but she broke my windscreen, said she wanted me dead’ 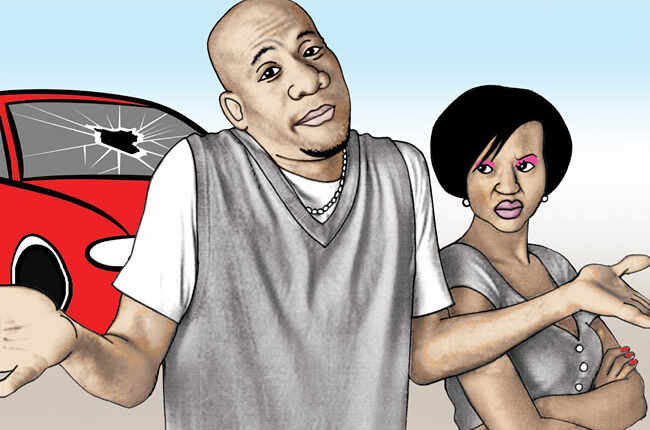 A man, Thomas Adeola has approached Grade A Customary court, Mapo, Ibadan, Oyo State, praying that it dissolved the union between him and his wife, Wumi Adeola on the grounds of neglect of him and their children, disrespect, character defamation and violence.

The plaintiff, in addition, pleaded for the custody of their children who he stated had always been in his care.

He further appealed for an order of injunction restraining the defendant from harassing, threatening and interfering with his private life.

Wunmi pleaded not liable to all the claims when read to her.

Thomas told the court that, “Wunmi and I held introduction ceremony and I paid a dowry on her.

“I entered into wedlock with Wunmi with the determination that our marriage must work, but she frustrated all my efforts at making this a reality.

“My wife started giving me hell from the first day of our marriage and has succeeded in making my life miserable.

“Wunmi has no respect for my person. She shouts on me, flouts my order and threatens me always.

“The more I complain the worse she becomes.

“I dragged her to court early in our marriage, but our family members mediated in our differences and she promised to change.

“I was entreated to withdraw the divorce case from court and I did.

“My lord, our relationship experienced peace for just a week and my wife went back to her old ways.”

The plaintiff added that, “Wunmi has consistently neglected me and our children. She does not have the love of our children in her heart.

“She leaves home early in the morning before they get out of bed and returns late at night after they have gone to bed.

“Rather than make up for her lapses, Wunmi beats these children to a pulp anytime she is around.

“I look after our children’s welfare. I dress them up in the morning, feed and take them to school and also go back to pick them after closing hours.

“My wife is indifferent to our children’s education. She has never checked their performance in school.

“The first and only time she met with their teachers, they rebuked her for her lackadaisical attitude towards our children’s education.

“I complained to my wife that taking up a dual role in the home was affecting my business, but she shoved aside my complaints with a shrug.”

Thomas added that, “My lord, I expected that my wife would be all over me on her return home in the night, but the reverse has always been the case.

“Wunmi not bothering if I had eaten or not, would pick her phone and make endless calls.

“I invited my mother to come and stay with us so that she could help with the children while I have more time for my business.

“She came and her presence took a lot of responsibilities off my shoulders, but my wife was never pleased having her around.

“She treated her with disdain and later told her that her services were no longer needed.

“My mother had no choice but to leave.

“I reported Wunmi to her mother who kept pleading with me to exercise more patience.

“According to her mother, she has sat her down a countless times to counsel her, but all her efforts have failed.”

Thomas went on: “My lord, Wunmi took to denting my image. She insults and paints me black before my friends and business associates. This automatically took its toll on my business.

“I made attempts at talking things over with her and even prostrated for her. I pleaded with her to change her ways, but she vowed not to desist until she saw me dead.

“We once had a heated argument and I left home in order to avoid taking a step I would regret.

“My wife locked me out and instructed our maid not to open the door when I called her to open it.

“At another time, she broke the windscreen of my car and swore not to stop destroying my property until I moved out of our home.

“My lord, my life is no longer safe living with a violent woman. I earnestly plead with this honourable court to end my marriage to my wife.

“I further entreat this honourable court to grant me custody of our three children because I am the one who has been looking after their welfare all this while, “the plaintiff concluded.

The court president, Mrs S.M Aknintayo, after she had heard the plaintiff, adjourned the case till December 6, for continuation of hearing.

My parents’ discussion with me at the beginning of the term