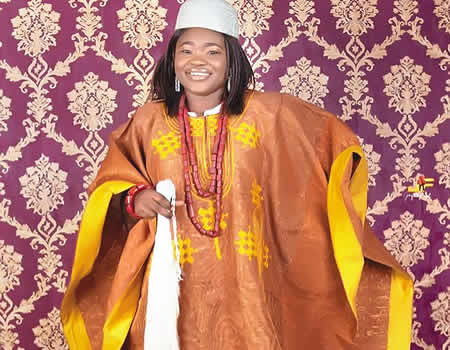 Her Royal Highness, Tinuade Babalola Adejuyigbe, a public administrator, became  the regent of Iboropaland, Akoko in Ondo State, while she was an undergraduate five years ago. In this interview by TAYO GESINDE,  the Oluboropa of Iboropoland, speaks about her experience on the throne, passion for women and the girl-child, among other issues. Excerpts.

How did this all begin?

I was made a regent on the February, 23, 2015, shortly after Oba Emmanuel Ayowole Adejuyigbe, my father, passed on. I had to go through some traditional rites of passage before I was pronounced a regent. At the time, I was a young girl who was trying to get a grip on life. I was an undergraduate, who just got admitted into the university.

How did your course mates and lecturers treat you after you ascended the throne?

Coming back to school after I ascended the throne changed my school life, as a lot of my course mates distanced themselves from me, but I received more respect from both my course mates and lecturers.

What has been your experience on the throne?

I have had several experiences that have broadened my horizon and for a young girl who was trying to find her way then, the position has helped me to understand life and define my perspective about a lot of things. The greatest experience that I have had is in the performance of my administrative roles as a traditional ruler. I have had the privilege of addressing issues and solving problems pertaining to my community, although, I’m still learning everyday and trying to be a better person and a better ruler for my community.

What do you miss about your life before the throne?

My family is a conservative family, and being a princess, I was groomed to be simple and mindful of my actions. This position has become a way of life, so I can’t say that I miss much of the things I never had. But the one thing that I miss is being carefree and acting the way most people of my age would. I never got to do most of the things people of my age would do.

What are the challenges you are facing as a young female regent?

The position of a regent is sacrosanct; therefore, the roles she plays in her domain should not be profane, especially in conflict prevention and resolution. Regents are interim leaders expected to uphold the throne until a king is chosen to assume the throne. As a young regent, I face several challenges, but the major challenge is that people often disregard the position. Most people see regents as a figure head, who sometimes have nothing to offer than the amount of wealth we have been able to acquire with the office and the outer beauty which we possess. I am pleading with the government to recognise regents like myself so that the general public can follow suit. We might not be permanent kings, but there are sacrifices  we make to assist the government in one way or the other.

At what age did you become a regent and how did you feel when you were asked to become one, especially considering your engagements with life then?

Firstly, I was only a teenager so I could not say that I had any engagements before assuming the throne aside from studying. I was devastated when my father passed on and I wasn’t expecting him to die soon because he was 57-year-old at the time. I knew the position would fall on us, his female children. So, it was unexpected that I would be chosen. The family thought the position would either fall on my elder sister or my younger one. I never had the thought that it would be me.

Now, as a female, what are you doing to empower the women in your community?

Women empowerment is what every one of us should be actively involved in. I plan to have a foundation of my own very soon and I’m actively working on that. However, I have worked with several foundations and NGOs to ensure that the lives of our women are made better. I have encouraged and facilitated campaigns to help reduce poverty, domestic violence and sexual assault against women. I have also empowered them in their various lines of work the little way I could. I need help from people to facilitate the women empowerment programme. Not just that, but to also see to the welfare of the children.

Do you still have a social life and how do you relax?

My social life has been relegated to the background for now. I only have few intimate  friends but I try as much as I can to unwind without going against the customs and regulations of my community. Outside community work, I engage in farming, I enjoy hiking, traveling and reading.

What are your plans towards getting married? Won’t men be scared of your status to propose marriage to you?

On whether men would be scared to propose to me, I would say that isn’t the case because I get messages daily from men on social media but I’m not ready for a relationship yet.

Besides, tradition doesn’t permit me to get pregnant on the throne, so celibacy is the deal.

What is your philosophy of life?

For me, I believe there is God and also, I believe in helping out others who are in need of help in the little way I can. I believe in being successful in whatever I do, being able to differentiate good from bad and being happy and  living life to the fullest.

What is your most embarrassing moment?

That would be the day my car got spoilt at a wedding. Due to financial constraints, the only car available in my palace for now is the one my late dad had before he passed on and it is old now and needs to be changed. On that particular day, I had a burial to attend and I was supposed to go for the church service before heading for the reception venue but got disappointed as my car refused to start after the church service. When everyone was heading for the reception venue which was about 30 minutes walk from the church, I had to join those who walked to the reception with my mother.

How would you describe yourself?

I remain my humble self and  the youngest female king in Nigeria and the first female king of Iboropa Akoko, Ondo State. I see myself as a young female king who is on the journey of self-discovery and at the same time laden with the responsibility of ruling a town.

This has been what motivates me daily, the need to make a name for myself and the zeal of making my community a much more developed one.

Some people believe that traditional rulers are no longer relevant in this day and age. What is your view on this?

In my own opinion, I believe that perception is wrong but I wouldn’t blame the people because we as traditional heads are the ones who should make the people see the riches of our culture and show them our importance, and by so doing they would come around and appreciate our existence. For instance, I saw on Instagram few days ago when a popular actress by name Funke Akindele and her husband came up with a very beautiful and educative poem teaching children our traditional poems in our native language.

What role have you been playing to ensure you and your people keep safe from coronavirus pandemic?

I had a meeting with my chiefs and we asked the town crier to create awareness and inform the people of my town about the virus and make sure they practise social distancing. We have also received hand sanitizers from the state government which we distributed to each household.

What is the level of infrastructure in Iboropaland? How close is government to the community, and how are you facilitating development to your domain?

Well, let me just say that we will soon get there. So far, the Ondo State  government has been doing the best it can and I believe they can do better. But personally, I have plans I am working on as regards infrastructure development in my community. I am currently undergoing the National Youth Service Corps (NYSC) programme, serving. Once I’m through with national service, my commitment will be fully towards my community as I have spent the last four years trying to juggle between my duties as a regent and my university education.

What more should your people expect from you?

I am planning to throw a birthday party after the lockdown and will officially launch my non-governmental organisation on that day. The NGO will be called: A Walk With Regent Tinuade. The aim of the NGO is to help the underprivileged, children, widows and the elderly.

What advice do you have for the youths?

Well, my advice to the younger generation out there is that they should all strive to be the best in whatever field they find themselves. They should always know that they are not too young to take up leadership role in our society.

Women and peace in crisis situations