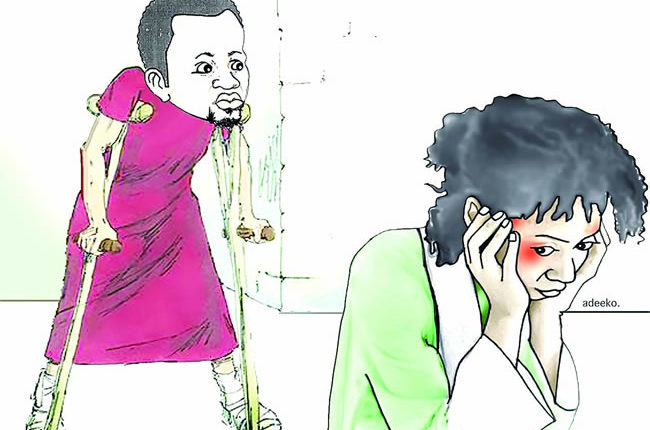 The union between a couple, Seyi Bamilore and Joel Bamilore,  has been dissolved by the Oja Oba/ Mapo Court C Customary Court, Mapo, Ibadan, Oyo State.

Seyi who dragged her husband, a cripple to court accused him of lack of care, neglect and battery.

The plaintiff stated that the defendant had refused that she had rest of mind.

She thus appealed to the court to end their relationship and grant her custody of their three children.

Joel initially agreed to divorce but later changed his mind after judgment had been given.

The plaintiff giving her evidence said, “I have done my best to make our marriage work, but my husband has kept frustrating me. My lord, I’m no longer interested in our union. I pray that you end it today.

“Joel, though a cripple, is troublesome and has almost snuffed life out of me.

“I went into marriage with him not minding that he is physically challenged. He had no money or property when we met, yet I still went ahead to marry him all because I loved him.

“Joel was the one who deflowered me and I offered him my whole heart.

“But he has been unfair to me. He is rash in his conduct and also wicked. He doesn’t wish me well.

“He cares less about my survival and that of our children and will always find fault in all that I do, after which he would fight me.

“Any time he’s angry, he will stand from his wheel chair with the aid of his crutches and pull me with my clothes. He will give me punches and tear my clothes to shreds.

“Our family members, neighbours and church members are tired of mediating in our differences.

“The leadership of our church decided to give us N20, 000 every month to improve the standard of our living, but my children and I felt no respite because he was always spending the money on himself.

“Another organisation also offered to train our three children in school which came as a relief to us.

“I once took ill and my husband abandoned me. He told me he didn’t have money and left me to my fate. It was my family members who came to my rescue by taking me to the hospital where I was given thorough medical attention.

“We relocated to Abuja after I was certified fit but rather than change, he got worse.

“Our landlady was kind to us. She fed us free for the first week we moved into her house.

“She is a food vendor and I decided to work with her in order to earn a living but my earning from this wasn’t enough to meet the home’s need.

“I appealed to Joel to give me money to start nylon business since it was the trade I learnt but he refused.

“Joel is stubborn and will never listen to any advice. He loves to have his way always.

“He decided that we leave Abuja for a while and we left with some of our belongings.

“My lord, he ordered the driver that brought us back from Abuja to drop me in my family house and drove off.

“I’m fed up with him. I, therefore, pray this honourable court to separate us and grant me custody of our children.

“I also appeal that I be allowed to pack the remaining of my belongings still in his house which includes a deep freezer and our children’s clothes.

“My lord, I further entreat the court to rule that he rent an apartment for me and our children and restrain him from coming there to harass, molest or fight me,” she said.

Husband replies: “My lord, I agree that we go our different ways. But I have told  Seyi that even if our marriage was dissolved, she would never forget me. No woman ever forgets the man who deflowered her.  I’m the first man she slept with.

“She lied that I didn’t take care of her. She had a strange ailment and I took her to the University College Hospital (UCH), Ibadan, where she underwent several tests.

“We were told she would undergo a surgery which would cost N300, 000 but I couldn’t afford it. My plan was to raise the fund through good Samaritans but her family members took her to another hospital where they were charged N30, 000 for the same surgery.

“I tried to make them see that their choice of hospital might not be the best for my wife but they insisted on having their way.

“My lord, she appeared okay after she was discharged from the hospital, but she got worse when we got to Abuja.

“I’m a caring father. I have never neglected our children’s welfare.

“I refused having sex with my wife because I wasn’t sure what effect her ailment could have on me.

“She reported me to our church leadership who eventually prevailed on me to resume sex with her after much persuasion.

“My lord, I regretted that I did. Immediately we were through with love making, I realised that my male organ was getting swollen and painful and I had to call on the same church leaders to come to my aid.”

Ruling after he had heard both parties, the court president, Chief Ademola Odunade observed that the duo no longer have affection for each other.

Odunade thus dissolved their union and granted custody of their three children to the plaintiff.

Joel went back on his words immediately judgment was given pleading that he was not ready to part ways with his wife, but the court insisted judgment had been given.

Seyi was granted custody of their three children while Joel was mandated to pay N15, 000 every month for their feeding.

He was also ordered to be responsible for their education and medical care.

The court further instructed Joel to give Seyi N5, 000 to pack the remaining of her belongings from his house. This Odunade stated should be paid through the court.

He beat me, disfigured my face before we got married, took to biting me after —Wife