I killed another woman after I escaped from detention, says suspected Ibadan serial killer 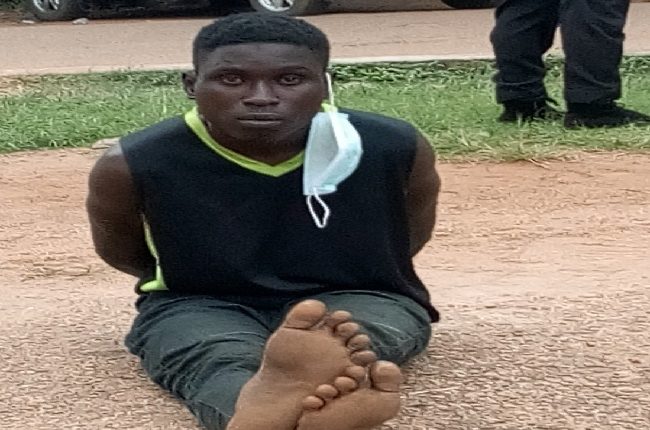 SUSPECTED Ibadan serial killer, Sunday Shodipe, who recently escaped from police custody before he was finally re-arrested last Sunday, has confessed to being responsible for the attack on one Mrs Oladeji Funmilayo at her residence at Onikeke community in Akinyele Local Government Area, last Thursday, August 20, which later resulted in her death.

Shodipe, who spoke with the Tribune Online while being paraded by the Oyo State Commissioner of Police, Joe Nwachukwu Enwonwu, at the police command headquarters, Eleyele, Ibadan, on Wednesday, said he attacked the woman at her residence at about 2:30 p.m. on August 13, two days after his escape from detention.

Mrs Oladeji, who was hacked on the head with a machete, was rushed to the University College Hospital (UCH), Ibadan, where she later died of her injuries.

Speaking further, Shodipe, however, claimed that it was the herbalist with whom he was arrested, Adedokun Yinusa, who planned his escape from detention and ordered him to kill another person.

The suspected serial killer said while in custody, Yinusa was always blaming him for confessing to newsmen everything that happened between them.

“Baba Yinusa said if I had kept quiet, we would have been freed by the court. However, while in custody, his wives would visit him and bring kola nuts and gin and he would utter some incantations on the items before taking them. I, however, don’t know what he was doing with those things.

“After the police discovered this, they stopped them from bringing the items to him, so he began complaining that the spirits would feast on his blood if he didn’t take gin.

“Baba Yinusa then kept disturbing one of the policemen to help him get a gin, but that one refused.

“Later, he began begging the policeman to allow us to go out and have our bath. The policeman initially didn’t agree, but Baba said he (the policeman) would agree after some days.

“And truly, after some days, the policeman allowed us to go and have our bath. We were eight in the cell and he said we should go in twos. When it was my turn, Baba told me not to forget what he had told me.

“He had told me that an opportunity would come for me to escape and that I should go to Akinyele area and attack someone; he said I should mention his name after committing the act.

“So after I went out to bath at about 7:00 p.m., I noticed the policeman was not concentrating because he had warned us not to attempt to escape, so I seized the opportunity and climbed a pole in the station and jumped over the fence.

“After two days, I went to Akinyele as instructed by Baba and I hacked the woman. Baba said that particular act would help protect his life because as he was not doing those things he ought to be doing because he had been incarcerated.”

On how he was arrested, Shodipe said he was by the side of the road when somebody said he should help him push his car.

“I suspected the person wanted to apprehend me, but there was nothing I could do. After I escaped, I went to Bodija and was helping people carry loads. I was aware the police were looking for me, so I was always wearing a face cap to hide my identity. However, when I wanted to help the person push his car, he just grabbed me and handed me over to the police.”

While thanking the Inspector-General of Police, Mohammed Adamu; the Oyo State government and the people of the state, Enwonwu said the police institution was rubbished during the period the suspect escaped, “but it was just because of the negligence of just one policeman.

“The policeman has been punished and it will serve as a lesson to others not to be negligent in their duties.”

On the N500,000 bounty placed on Shodipe, the police commissioner said the money had been paid to the individual who assisted in arresting the suspect.

The police commissioner further stated that the suspect would now be transferred to the correctional centre.

He said after the suspects were arraigned in court, it was the court that ordered their remand in police custody in order not to congest the correctional centre because of the COVID-19 pandemic.

Enwonwu charged members of the public to continue to partner with the police in order to keep the state safe. killed