I have phone number, picture of policeman that broke my spine, man tells Lagos panel 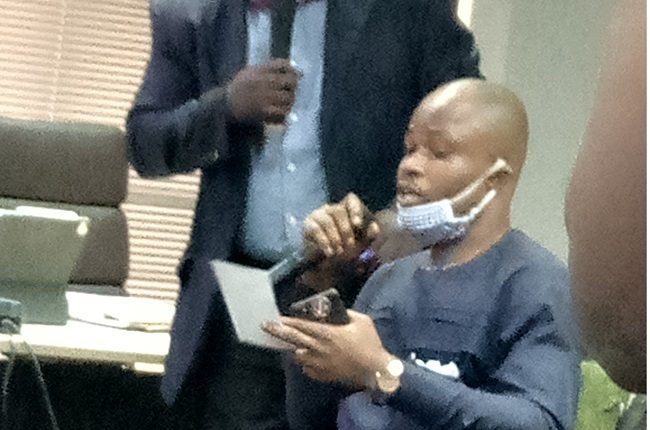 A victim of SARS operatives’ horrendous acts, Ndukwe Ekekwe whose spine was allegedly broken by them has presented before the Lagos Judicial Panel the picture of one of the officers that broke his spine.

Ndukwe during cross-examination by the legal representative of the Nigerian Police, Emmanuel Eze, presented the phone number with a picture of a fair-complexioned and bearded man he identified as Hamzah, stressing that he was the Investigating Police Officer (IPO) that took him to the hospital after his spine was broken.

Being cross-examined by the legal representative of the Nigerian Police, Emmanuel Eze, Ndukwe told the Panel that he got the picture of Hamzah through his WhatsApp status.

He said, “when they came to my shop at the Alaba International Market, they wore T-shirt written at the back FSARS.

Among them, I know and identify the IPO. His name is Hamzah and I have his phone contact. I was able to get his picture through the number he gave to my mother when I was at LUTH. His number is 07060712007. He is one of the officers. He was the person that arrested me and took me to the Ikeja police command for torturing.

He was the policeman that confined me to the wheelchair. I know and recognize him because I am not blind.

When they came for my arrest, I wasn’t shown any ID card but when the people that were present requested to see their ID cards, they shot in the air and released teargas.

As at this moment, I didn’t know what I have done wrong. They didn’t tell me. I was only told it was an order from the Inspector General of Police. I was arrested by two police officers but others joined hands to torture me at Ikeja police command.

I spent two days in detention. I was arrested around 2 pm and on the following day around 4 pm, they have broken my spine and teeth. And since then, I have been on the wheelchair for four years.

On his part, Eze prayed the panel for an adjournment stressing “because of the involvement of SARS and other tactical teams, are applying for an adjournment. He has given a name and the number he provided didn’t go through.

In the overall interest of justice, I pray for an adjournment to enable us to conduct a thorough investigation into the matter.”

Reacting, retired Justice Doris Okuwobi said, “This is petition is one of over 100 petitions to be heard.

I am constraint to consider this adjournment to December 1, 2020. We can’t continue at this baby steps. We have all hands in glove for cases to continue at a fast rate. We have just six months to conclude with all the petitions.”

Former Ekiti state governor, Mr Ayodele Fayose, has congratulated Edo State governor, Godwin Obaseki, on his victory during last Saturday’s governorship poll, calling on him not to return to the All Progressives Congress (APC).

Obaseki who joined the Peoples Democratic Party (PDP) in June after he was disqualified by the APC, defeated Pastor Osagie Ize-Iyamu of the APC in the election results announced by the Independent National Electoral Commission (INEC) on Sunday.I have phone number I have phone number

A Kano based industrialist, Chief Kalu Ogbonnaya, has advised the Federal Government to take necessary steps to stimulate the nation’s economy to prevent a recession post COVID-19.I have phone number  I have phone number

Ogbonnaya who spoke in an interview with the News Agency of Nigeria (NAN) on Thursday in Kano, said as a result of the coronavirus raving the world, no business has been moving.I have phone number  I have phone number