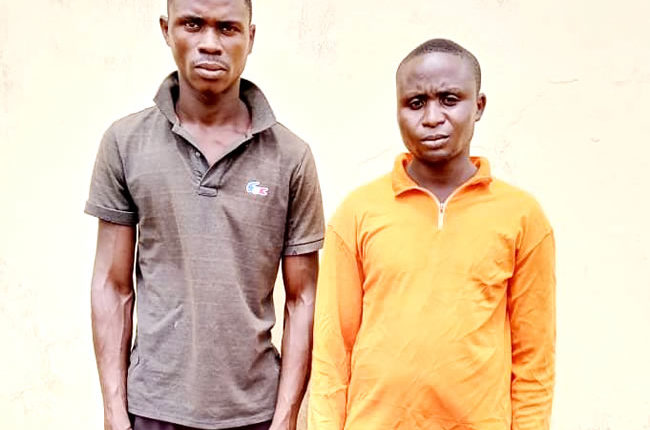 Two ritual murder suspects, who were recently arrested by detectives from the Ogun State Police Command, have narrated their involvement in the killing of a mother and her four-year-old son, for money ritual purpose.

Baoku Ifajuyi (29), a herbalist, and Olamide Odulaja (27), a bricklayer, were arrested by detectives in Ogun State Police Command, over the murder of a woman, Modupeola Folorunsho, and her four-year-old son, Peter Folorunsho, on February 13, for money-making ritual.

The victim’s husband had reported to the police at Ijebu Igbo Division on February 14, that his wife and son, who went out the previous day had yet to return while efforts to locate her and the boy did not yield any positive result.

Technical and intelligence-based investigations however led the police to the arrest of Odulaja in Ibadan.

He also disclosed that the herbalist burnt the woman’s head which was used to prepare charms for him.

As a result of the confession, detectives reportedly went after the herbalist but found out that he had absconded on learning that Odulaja had been arrested.

He was eventually traced to Kajola village, where he was arrested by the DPO, Awa Ijebu, with the assistance of hunters and local vigilantes.

In an interview with Saturday Tribune, Odulaja narrated how the move to kill the victims began:

“I am a bricklayer from Ijebu Igbo in Ogun State, but reside in Ibadan, Oyo State.

“Late in December 2020, I was in Ibadan, as I was called to give alms on behalf of my mum. I went to Ijebu Igbo, met my sister and some people. I greeted them and we discussed on the alms. I returned to Ibadan.

“Two days after, I called my sister and she asked me not to forget about the discussion on alms. I asked to greet her daughter and anyone around. The phone was given to her daughter and one Mrs Folorunsho, whom we generally called ‘Iya Tailor’, as she was a sewing mistress.

“When I greeted the woman, she asked me to be greeting her regularly. I told her to get my number from my sister’s phone, which she did. We spoke about three times after that.

“My paternal grandmother later asked if I would come home for end of the year celebration. I came to Ijebu Igbo on January 2.

“I stopped at my sister’s place but she was sleeping.

“I also went to greet one Wale, the elder brother of Ifajuyi. Ifajuyi also asked about my work, and I told him things were not going smoothly.

“He asked me to come to his office. He said he would give me a powdery substance that would boost my work after its use.

“He gave me the  substance, and I licked and swallowed it with alcohol. He gave me some, wrapped in a paper, and asked me to use it when I got to Ibadan.

“He called me two days after, asking if there was positive change, and I replied him that I’ve not experienced any.

“Some days later, he called me and asked if I could come to Ibadan. He said he wanted to attend to some clients and would like me to benefit from the gains.

“I told him I didn’t have money with me. He asked me to send my account number to him, and eventually paid N5,000 into my account.

“I went to Ijebu Igbo to meet with Ifajuyi . As I entered his office, he locked the door behind. He asked if I had any friend in the town, and I replied that I didn’t have any, except his elder brother. He asked for another male or female, and I told him I used to communicate with ’Iya Tailor’.

“He asked me to call the phone number of the woman, and I did. He collected the phone from me, turned to the wall, spoke to the woman and asked her to come to a particular place. He asked me to sit on the bench in his office.

“Not too long after, Iya Tailor called back that she didn’t know where he directed her to, and he told her to pick a commercial motorcyclist and describe the place to him, as he told her.

“He asked me to get up from the bench, put some powdery charm into my palm, and asked me to lick it.

“Thereafter, he opened the door and directed me to mount a motorcycle.

“We crossed a river, and he asked me to be with the motorcycle, while he went to pick Iya Tailor.

“He later beckoned at me, asking me to cross the river to another side, to meet him and the woman.

“The woman stood with her son that she brought, and Ifajuyi asked me to take hold of the son.

“He brought out a knife that had been placed at the back of the motorcycle he rode to the scene. He also took a sack and asked the woman to lie down. She complied without any struggle. He put the knife on her throat and sliced her. She started shaking silently on the ground, in the throes of death.

“As the boy saw what was being done to his mother, he started crying. As I made a move to placate the boy, Ifajuyi used the knife he was holding to give me a deep cut in my hand. I started bleeding.

“As I cried; ‘my hand!’, he took the boy and slaughtered his neck. Then, he used the scarf tied by the woman to bind her neck, put the two heads in the sack he had.

“He put another powdery substance in my left palm, and asked me to lick and swallow it with alcohol. He still put two other substances in my palm and asked me to swallow them, after which he said he just had peace in his mind that he would not be betrayed.

“In the night, at about 11:30pm, he took me on a bike to go and pick the heads where he kept them  in the bush. He woke me up at 3am and asked me to leave for Ibadan.

“For a week, he didn’t call me. Later, he called me to come to Ijebu Igbo again, gave me charms put in a bottle, with palm fronds tied on its neck, and taught me how to use it. He also taught me incantations I should recite.

“Throughout the process, I had no control over myself. I didn’t know I had been charmed. I was only doing what he asked me to do. In all, I got N9,000 from him.”

But in his narration, Ifajuyi said that it was Odulaja who brought two heads from Ibadan.

Ifajuyi said he understudied his late father before he became a full-fledged herbalist four years ago.

In an interview, he said: “I was arrested by the police because of the killing of a mother and her child.

“It was Odulaja who came to me in Ijebu Igbo and said that he needed charms for protection and favour.

“I gave him a substance to lick, and promised it would bring positive result.

“About four days after, he came from Ibadan to me and said he wanted to do money ritual to boost his business. He told me he had a human head in Ibadan but didn’t have transport money. I sent N5,000 to him.

“He told me that police took the head from him in a vehicle, but still brought two heads. The heads were oozing water.

“I put the heads in a sack and placed them in a gutter in front of my house. He was the one who stabbed himself, the devil can bear me witness.

“I was the one who burnt the heads to do charms for Odulaja.”

He later recanted, saying that he was deeply involved in the murder of the mother and son.

Ifajuyi said that what he needed from the government is that it should bestow mercy on him and forgive his misdeeds.

A police source told Saturday Tribune that initially, Ifajuyi didn’t want to say the truth because of the oath he administered to Odulaja.

The source said that it was when Odulaja sighted Ifajuyi that he could open up, as he was afraid of dying by spilling the beans.

The police image-maker, DSP Abimbola Oyeyemi, who confirmed the story in a recent statement, said that the state Commissioner of Police, Edward Awolowo Ajogun, commended his men for their display of investigative prowess.

The PPRO said that the police commissioner had ordered the immediate transfer of the case to State Criminal Investigation and Intelligence Department for further investigation and diligent prosecution.

NNPC’s flag on the ruins of Abule Ado