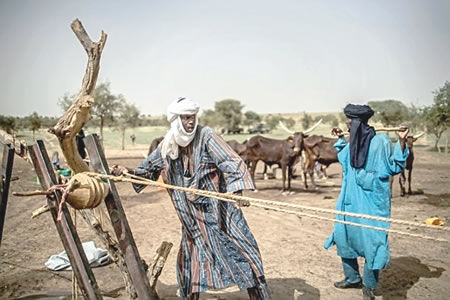 Mustapha Abdullahi spent his childhood in constant hunger “roaming the streets for food” in his village in northern Nigeria, unsure when his next meal would arrive.

Like many living in areas where opportunities are scarce, he knew he had to move. When he turned 12 he travelled south to Nigeria’s commercial megacity, Lagos.

As with many of the arrivals from the north, he has made his living driving a motorbike taxi locally known as an okada.

Yet a recent ban on okadas across major parts of Lagos has left drivers struggling to feed their families.

Rising migration to Lagos has caused the city’s population to soar — spurred by widening inequality between the largely-Muslim north and Christian-majority south.

According to the World Bank, 87 million people in Africa’s most populous country live in extreme poverty — of which 87 per cent live in northern Nigeria.

The nation’s total population is around 190 million people.

“Regionally, the north lags far behind the south in every human capital outcome,” a 2019 World Bank report said.

A jihadist insurgency in the northeast, armed attacks and kidnappings in the northwest, and the impact of climate change have caused conditions in northern Nigeria to worsen.

Authorities in Lagos said the ban on motorbike taxis and rickshaws was aimed at cutting down on “deaths and disorderliness” on the city’s choked roads.

But many drivers like Abdullahi suspect it was aimed primarily at the large number of northerners who have headed south in search of a better life.

‘Manchester of the north’

In the 1980s, Kano, the north’s most populous city and commercial nerve-centre, was known as “Manchester of the north”, home to more than 500 textile producers.

Yet after a collapse in local industry in the 1990s, there are now fewer than 100 factories, and widespread unemployment after hundreds of thousands of job losses.

In recent decades, agriculture has been the dominant trade in northern Nigeria, in part due to vast expanses of land.

Yet climate change has hit agricultural yields hard and insecurity has rendered many areas unsafe to farm.

The effect has been increased migration to cities such as Lagos, Nigeria’s capital Abuja and the southern oil-hub Port Harcourt, where jobs are easier to come by.

Recent data is not available, but a 2010 study from Nigeria’s National Population Commission estimated 23 percent of the population were “migrants” and 40 percent of those living in Lagos came from other regions.

Awwalu Usman, a 32-year old subsistence farmer from Kano, started travelling to Lagos eight years ago to work as a cobbler.

“I go to Lagos immediately after the harvest and return just before planting season,” he told AFP.

His change in fortunes has been dramatic and the money he earned in Lagos has allowed him to buy a small house.

Inequalities between Nigeria’s regions have their roots in the country’s colonial history when the British merged starkly different northern and southern territories in 1914.

While political power has oscillated between the regions since independence, the north has often lagged behind in terms of education and opportunities.

The current government of Muhammadu Buhari, a northern Muslim, has tried to boost local industry and agriculture by introducing tariffs on imports and awarding grants and loans to farmers.

But officials admit that while there have been modest signs of progress, it will take time for jobs and livelihoods to feel the effect.

The Emir of Kano Sanusi Lamido, Nigeria’s second most-important Islamic monarch, has been an outspoken critic of governance in the region, blaming leaders for failing to tackle poverty.

“Nobody who is a leader in northern Nigeria today can afford to be happy. You cannot be happy with about 87 per cent of poverty in Nigeria being in the north,” he said in a speech last month.

According to UNICEF, 69 percent of the 13 million children not going to school in Nigeria are in the north.

Lamido, a former central bank governor, urged parents to have smaller families, with birth rates in northern Nigeria, the highest in the country.

“There are people who cannot afford to feed one wife but are ready to marry three wives and have more children that they cannot feed, talk less of paying for their school fees,” he said.