I dumped PDP to promote peace, dev in N/Delta ― Uduaghan 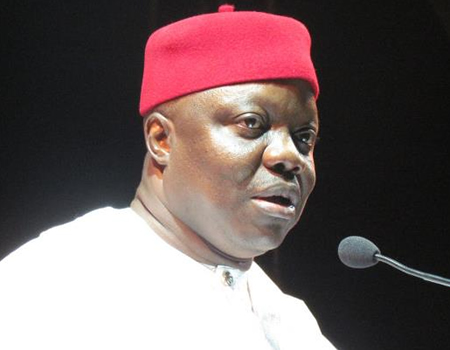 FORMER governor of Delta State, Mr Emmanuel Uduaghan has said his defection from the Peoples Democratic Party (PDP) to All Progressives Congress (APC), was informed by the desire to promote peace and development in the Niger Delta.

Uduaghan, the immediate past governor of Delta state under the platform of the PD between 2007 and 2015, stated this when he fielded questions from State House correspondents at the end of the meeting of APC Caucus held at the Presidential Villa, Abuja, on Tuesday night.

The ex-governor was among those that attended the APC National caucus meeting with President Muhammadu Buhari and other party members.

According to him, he also moved to APC because of the massive development being witnessed in the Niger Delta region under the APC-led Federal Government.

“Politics is about interest. I’m from the Niger Delta and I managed a lot of crises in Niger Delta.

“Sometimes I went to the creeks and engaged the boys, and my principle when I was managing the Niger Delta was out of engagement, and the current APC government has succeeded in managing the crisis they have met through engagement.

Tinubu will win, he is healthy – APC guber candidate

“The President was seeing a lot of leaders from the Niger Delta while the Vice President went from state to state of oil-producing states, making a lot of engagements, and agreements were reached.

“Nobody at that level had gone from state to state before in Nigeria, this was the first time and of course if that is happening, they need to be supported by those of us from the Niger Delta who are passionate about Niger Delta so that in moving forward we can have solutions to the crisis of Niger Delta.

“If a new person comes he would start putting agreements up again and all that,’’ he said.

Uduaghan further explained that he was attracted to join the APC because of the massive infrastructural projects embarked upon by the Buhari administration in the Niger Delta region.

He cited the recently rehabilitated rail lines in Delta state and the inauguration of a committee to actualize the Gas City project in the area.

He said: “Secondly in the area of infrastructure, this government has done very well.

“So for me, let me join the party to be able to effect changes because we cannot achieve anything by working from the outside in the Niger Delta.

“Some of us have to join the APC train and many people are going to come with me so that we can achieve a lot more in the Niger Delta for the APC government.

“Politics is about regional interest and I’m interested in the Niger Delta.’’