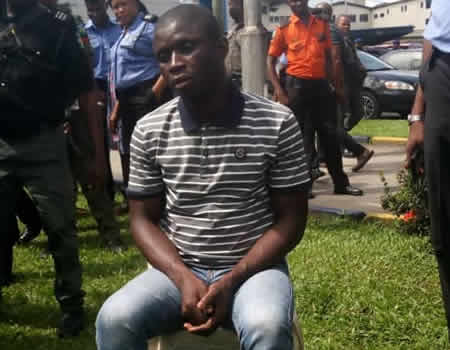 Gracious David West, the key suspect arrested Thursday and paraded by the Rivers police command on Friday has said he was forced into killing young girls in hotel rooms to avenge his mother who he said died from illness after she was poisoned by an unknown person.

Making the revelation yesterday while speaking with journalists at the headquarters of the Rivers State Police Command in Port Harcourt, the 39-year-old native of Asari Toru local government, said he was working alone and not for anyone or any group.

“My mother was poisoned and she died of sickness. I am the only son of my father. I don’t have anybody, I work alone, I don’t even have a house,” he stated.

Why talking on why he kills, he said he doesn’t know what usually pushes him.

“I don’t know what is causing that to me, I don’t really know what moves me into doing that but after doing it I start regretting, I start crying why I did it. I even went to Lord Chosen Church close to Obigbo branch. I told the pastor that I kill girls in the hotel that if he can help me that I don’t know what is wrong with me.

West was said to be an ex-militant.  Information reaching Tribune Online  revealed he was rehabilitated by the popular Omega Prayer Ministry OPM and assisted to secure a job but stole the property of the organisation and absconded before returning to crime.

On how he kills the girls, he said; “I buy kitchen knives from those Hausa people that hawk knives. After I take them to the hotel and sometime in the middle of the night, I will wake them up and with knives, I would threaten to kill them if they screamed. I will use it to cut the pillowcase with which I tie them so that they cannot drag with me when l want to kill them.

“Some of them in that fear would now promise to give me money so that I will spare them. So, I will collect their ATM cards and their pins. I would deceive them to believe that I will not kill them while tying them up,” he said.

According to Rivers state Commissioner of Police, Mustapha Dandaura who paraded him before journalists and the general public said the suspect was arrested in a commercial bus enroute Akwa Ibom state.

The arrest came about 48 hours after his identity was revealed from a CCTV camera footage of the hotel of his last victim along SARS Road, Rukpokwu area of Rivers state.

Dandaura said that the suspect seeing that Rivers state was no longer conducive for him attempted to escape but was arrested by operatives of sars Bori who were on a routine stop and search along the Ogoni axis of the East-West Road.

He said; “The Rivers police command is indeed elated with this achievement, but this did not come add a surprise. It could be recalled that on my assumption of duty as commissioner of police three months ago, I made a pledge to the good people of the state that I was here with the clear mandate, to fight crime and criminality head on and bring same to barest minimum.

“The suspect is definitely not alone in these killings, though he had made useful confessions but the command will go beyond his confession to ensure that a conclusive end is achieved that will serve the interest of justice.
“So far three suspects are in our custody and are being investigated in connection with these killings. They will be paraded as soon as investigation is concluded”.