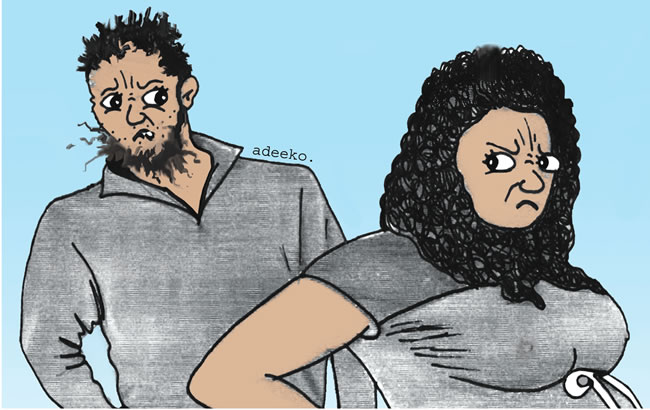 Oja Oba/Mapo Court C Customary Court, Mapo, Ibadan, Oyo State, has ruled on the divorce suit brought before it by a woman, Rukayat Olayomi, against her husband, Layo Olayomi.

Rukayat in her suit alleged that Layo concealed from her the state of his health throughout the time they were courting.

The plaintiff stated that she got to know that the defendant was deranged a few months after they were married.

According to her, living with Layo had become unsafe. Rukayat explained that Layo sometimes went violent and would hit her with dangerous objects.

The plaintiff told the court that she escaped death the last time he did.

Rukayat explained that Layo grabbed her neck and hit her repeatedly on the head with a stool till she bled profusely from the nose.

The plaintiff also said that he once snatched their baby from her, ran into the street, jumped on a commercial motorcycle  and disappeared into the thin air.

Rukayat stated that he surfaced at his mother’s place with the baby hours later.

The plaintiff appealed to the court to stop her marriage to her husband and grant her custody of their two children.

She also prayed the court to restrain him from coming to disturb her at her place of residence or work place.

Layo did not show up in court after being served a court summon and court hearing.

Rukayat, giving her testimony said: “My lord, I pray that you end my union with Layo before he kills me. I have faced enough embarrassment and born enough shame married to a man who is mentally unfit.

“I never knew that my husband was mentally deranged throughout the time we were courting. His family members, most especially his mother, managed his illness so well and gave no chance for anyone, even me, to suspect something was amiss.

“I began to notice Layo’s strange acts a year after we got married.

“I prepared his breakfast and left for work that faithful morning but later received a call from my mother in-law accusing me of abandoning my husband who was sick.

“I was surprised at this allegation and rushed home.

“I noticed Layo’s behaviour was strange when I got home. My mother in-law was angry and almost fought me. She accused me of neglecting my husband who, according to her, had been thinking and failed to rest.

“Every explanation I gave to exonerate myself from the blame fell on deaf ears. She arranged that my husband be taken to her house and from there to the hospital.

“She refused that I checked on my husband for the weeks he was on admission at the hospital,” the plaintiff stated.

Rukayat added that, “My lord, I started suspecting that Layo was not normal when he suddenly started behaving in an absurd manner.  We were both in the room and our baby who was just one-year old was in my hand. Layo snatched the baby from me and ran out of the room.

“I ran after him.  He ran into the street, boarded a commercial motorcycle and disappeared into the thin air.

“My lord, my husband again went berserk at another time. We were both in the room and preparing to go to bed when he suddenly grabbed my neck from the back. He started hitting my head on the wall. Not done, he again hit me on the head with a stool. The more I screamed and struggled to escape from his grip, the more firm he held and hit me.

“Before I knew it, I had started bleeding through the nose.

“Layo would have killed me that night but for our landlord who came to my rescue. He broke our door and released me from his hands.

“He is at present staying with his mother who, in her bid to conceal his illness, refused that he interacts with anyone.

“My lord, I pray that you separate us and put our two children in my care because he’s not psychologically fit to take care of them,“ she pleaded.

Giving his judgment, the court president, Chief Ademola Odunade, dissolved their union and granted custody of their children to the plaintiff.

The defendant was asked to pay N10,000 every month for their children’s feeding and be responsible for their education and healthcare.