I did not reject ministerial nomination ― Ogbe 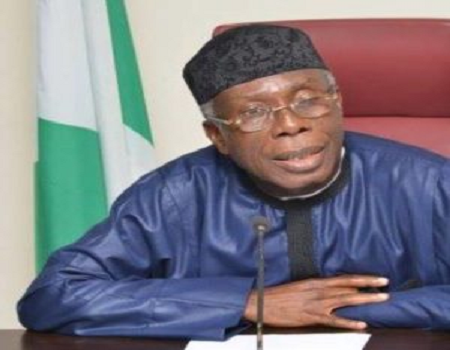 The Immediate past Minister of Agriculture and Rural Development, Chief Audu Ogbeh on Friday dismissed the speculations making the round that he rejected the offer of being reappointed as a minister under the new dispensation.

Chief Ogbeh stated this in Abuja yesterday when a delegation of the Idoma Development Forum led by Dr. Jacob Okwori paid him a visit yesterday to seek clarifications on insinuations surrounding his non-reappointment as Minister in the proposed Cabinet of President Mohammed Buhari.

While debunking the insinuation Ogbeh said, “there was no such thing that occurred. I never rejected Mr. President’s offer for re-appointment. No one approached me on behalf of Mr. President since we left office on 29th May, and I never went to lobby anyone, because I had a very good and smooth working relationship with Mr. President.”

Chief Ogbeh described the insinuation as false., saying, “It is completely falsehood and mischief for anyone to insinuate that I declined the offer of re-appointment.”

He, however, thanked Mr. President for giving him in the chance to serve in the first place.

According to him, “at any rate, I am grateful to Mr. President for giving me the chance to contribute to the development of our dear country in the last four years. President Muhammadu Buhari is such a good man who means well for the country. I believe we all need to support him to take the country to the next level of national development”

Earlier, the leader of the delegation, Dr. Jacob Adah Okwori had expressed dismay over the allegation that Chief Ogbeh had last week declined interest to be re-appointed into the next level administration of President Muhammadu Buhari despite his sterling performance as Minister.

According to him, “We your kinsmen are  living witnesses to your outstanding performances as Minister for Agriculture and Rural Development between 2015 and 2019 when you worked assiduously to transform Nigeria into the world’s Agriculture Center, and flood the global market with food of Nigerian origins.”

Dr. Okwori who observed that Nigerians made enormous savings at the time said, “within the period, one of Nigeria’s biggest businesses of FOREX namely RICE alongside others were literarily removed from the list of food import items to save about N21b according to the Central Bank of Nigeria (CBN) in 2018. Agriculture export grew by 77.3%, from N170b in 2017 to N270b in 2018.

Dr. Okwori reeled out other achievements of Chief Ogbeh to include. “the three Universities of Agriculture (Makurdi, Abeokuta, and Umudike) were backed under the Ministry of Agriculture and Rural Development with increased funding.

“The Bank of Agriculture underwent restructuring in a plan that was to sell majority share to farmers to make it a Farmers’ Bank, with targeted lending rates at five percent

“Today, Nigeria is the largest seed producing country in the West African sub-region, and we were all exceedingly hopeful that you were amongst Mr. President’s foremost re-appointees and that he had no plan of relieving you of the job.

Dr. Jacob lamented that they were however surprised that Ogbeh’s name was not found on the list said, “we are really surprised when your name was not on the list, considering all these accomplishments, but our greatest dismay came when we gathered that you had declined the offer for reappointment by Mr. President for some personal reasons, when he sent to you

“Honestly, we felt really disappointed that you would take such a decision without reflecting on the larger impact it would bear on the Idoma nation, Benue state and Nigeria at large

“We are sure that Mr. President himself would have felt slighted that you rejected his offer

“There has been a strong indication that your denial gives credence to the stories going round in the social media and official circles that the so-called ‘cartel in the villa’ actually interfered with the list of Mr. President and even the Vice President by replacing some names with their preferred candidates.”

Stakeholders to brainstorm on agricultural development at ACAN summit