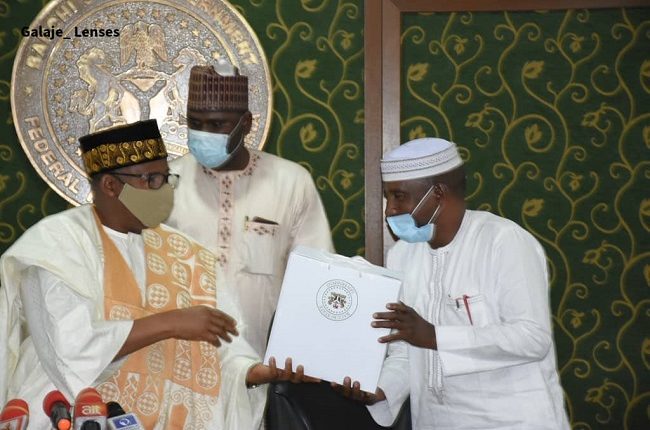 Bauchi State governor, Sen Bala Abdulkadri Mohammed has unequivocally declared that as the most visible and vocal minister during the Goodluck Ebele Jonathan led PDP administration, he is now carrying the cross of the former administration even after his exit from office as Minister of the Federal Capital Territory.

Bala Mohammed who could not hide his emotions said that he had to face the issue of accountability when he left office as Minister after the Jonathan administration, pointing out that despite all the prosecutions and persecutions he had faced as a private Nigerian, all the charges against him have been proven to be wrong.

While referring to the journalism profession, he said that, “we in this noble profession believe in transparency, accountability and the fairness of the judicial system of the country because it is the last hope of the common man. That is why I am always taking care to know where my colleagues are when we are doing things because I am under the notice that I have to be accountable and make you proud”.

The governor added that “I cannot betray that value and moral that you carry. As members of the society that are not selfish, that are detribalised, nationalistic and honest in doing things, I have taken note of your needs and those are things I must do ordinarily without being asked”.

He further explained that “When I was in the FCT as the Minister, I had to rebuild the NUJ chapter there through cooperating social responsibility.

I had to provide land for the National headquarters because I am a proud member of the journalists’ community.

Definitely, I have made promises to you and I am conscious of them. We will look in as we have so many contending needs on our treasury. We will rebuild the NUJ secretariat here and I will do it as my legacy”.

He also reiterated the commitment of his administration to improve the welfare of the media in the state because according to him, journalists are facing challenges of survival in the discharge of their professional duties.

Bala Mohammed also said that he has always looked at the media with nostalgia, saying that he has a soft centre for reporters, knowing that they are exposed to a lot of challenges from the society, often without any enumeration as they are just given a pen and paper without salaries or allowances.

He further said that most of the media houses across the country are facing the challenges of survival, adding that newspaper proprietors and media owners are battling with economic problems particularly in the COVID-19 pandemic situation despite the fact that the media is the mirror the society looks on to correct itself.

He said, “Sometimes we have to follow newsmakers that are less qualified than us for news. We go through insults and challenges before we are able to discharge this wondrous responsibility. I want to congratulate you for being dogged, patriotic and doing all these despite the challenges”

The governor added that “Your election should be seen as a service to humanity because it is a thankless job, even to the media houses you are serving and the society. Sometimes, we are looked upon with a lot of disdain. Often, we are subject to caricature. Often, we are insulted, but we have to do the job because it is the number one profession of the universe”

This is the profession I had always wanted to be. You have always been there supporting and being with me. I am watching my career progression with keen interest and I have several constituencies, but the biggest burden is being a media man” he further said.

The governor then promised that the NUJ Press Center will be given a face-lift to make it look modern just as a befitting well-equipped conference hall will be constructed as well as some outdoor games facilities to keep them busy, relaxed and alert to their responsibilities.

While speaking earlier, the newly elected State Council Chairman of the NUJ, Comrade Umar Sa’id commended the governor for being a media-friendly person, saying that many journalists in the state are now given political appointments in the state executive council.