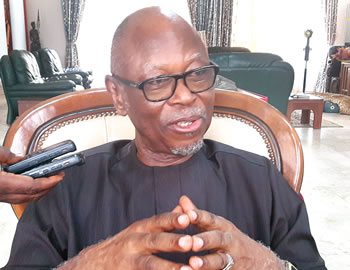 THE national chairman of All Progressives Congress, Chief John Odigie-Oyegun, has said that the call for his resignation by the national leader of the party, Senator Bola Tinubu was illegal and not in comformity with the provisions of the party constitution.

He has also declared that there was no going back on the outcome of the gubernatorial primaries in Ondo State that produced Rotimi Akeredolu as the APC standard-bearer.

APC chairman spoke with State House Correspondents, on Tuesday in Abuja, after a closed-door meeting with President Muhammadu Buhari, insisting that he could not be removed on the pages of newspapers.

Odigie-Oyegun, who however denied any rift with Tinubu, accused the national leader of the party of using harsh words on him.

Tinubu had in a strongly worded letter made public  by his media aide, asked Odigie-Oyegun to quit as the national Chairman of the ruling party over the outcome of the just concluded primaries in Ondo State, where Mr Rotimi Akeredolu, emerged as the party’s standardbearer.

When asked about the  latest on his  rift with Tinubu, especially if his was stepping down as demanded by Tinubu, the APC chairman said:  “There is no rift with Asiwaju. We have difference of opinion, difference of perception and I think that it’s normal. Yes I agree that the nature of the statement was a bit harsh.

“The method of getting rid of a national chairman if that is what I will call it, is spelt out in the constitution; they don’t take place on the pages of newspapers,” he said.

On why the party had not called on the National Executive Committee (NEC) members to meet over the issues, he said it was proper for them to meet, and that they would all meet at the appropriate time.

While also responding to allegations that people might assume that he was behind some youths who were protesting at the party’s headquarters over alleged highhandedness of Tinubu, Odigie-Oyegun said: “God forbid, anybody who knows me knows that that is not my style. I’m equally shocked and I’m going to look into it and find out  why and who is behind it.

“Do they know how far back our association goes? Do they know that we were in the trenches together in the National Democratic Coalition (NADECO) days? Why can’t people, who have mutual respect for each other, have different opinions?

“All we had was difference of opinions, yes it was expressed a bit harshly, but that doesn’t remove the basic fact that we have worked together for a very long time,” he said.

Asked if he was going to make U-turn on the Ondo primaries since it was causing controversy, the APC chairman only Independent National Electoral Commission (INEC) could effect such change.

Speaking on the just-concluded gubernatorial election in Edo State where his party won, the chairman said the outcome affirmed that Nigerians still have faith and confidence in the leadership of President Muhammadu Buhari, in spite of the current economic challenges.

He said: “Well, it was a hard-fought election that was clear. Two things really, it was more of a referendum first on the performance of the governor, second, the quality of our candidate and most importantly, given the economic situation, it was an opportunity for us to measure the continued popularity and acceptability of our president.

“And what it indicated is that by and large, the people of this country still have faith and confidence in the fact that if there is any one man that can fix their situation, it is President Muhammadu Buhari,” he said.

Presidency to NEF: You are delusional over Nigeria’s existence