I bought a wedding dress that wasn’t my size, to shed weight —Azeezat Oluwakemi 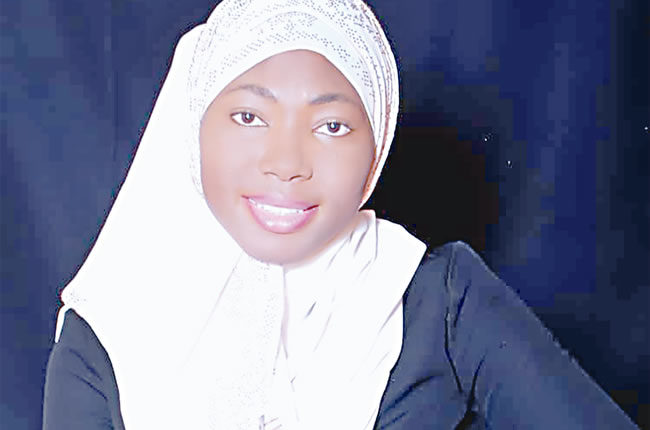 Azeezat Oluwakemi  Sule popularly referred to as Omodadi is a nutritionist and weight-loss expert.  In this interview by SEGUN KASALI, she speaks about her 15 years’ battle with obesity, how she eventually lost 55 kg and how she has been able to keep fit for the past two years.

What tickled your fancy in Nutrition?

As a child, I grew up in a humble home. My parents were teachers and they received their salaries at the end of the month coupled with the fact that they only bought foods they could afford, due to the situation of the country at the time

I later discovered that the foods they were buying were not according to nutritional standards, perhaps due to financial constraints or lack of information because the foods were not expensive. So, they ended up buying foods that would not nourish us. I got curious as a child and asked dad why we had to buy a bag of rice and some other foodstuffs. I wanted to know what the problem was. Another thing I realised was that many people in my family were obese. I got to school and I wanted to participate in sports but my weight was always the problem. So, I was not always getting to the final selection. Whenever I asked why  they would tell me it was because I was fat l. Since then, I made up my mind to get rid of fat. But, how I was going to do it, I never knew until I grew up and found myself studying Biochemistry.

So, you studied Biochemistry because  you were curious about how to get rid of excess weight?

Yes, it was curiosity that made me choose the course coupled with the fact that my family were obese. They kept telling me that it was hereditary and there was nothing I could do about it. So, I needed to find out if it was true that some people were naturally fat while others were not. I actually wanted to study Medicine because I thought that was the best course in the world but I was only able to get admission into Biochemistry. It was in the process of studying Biochemistry, that I discovered the nutritional aspect  of Biochemistry and learnt about how the food we eat passes through the digestion process and all that. When  we got to the nutrition aspect of the course, I was very much interested in it. I told myself,  “God, this is what I have been looking for.” Along the way,  I discovered so many things about nutrition. That was how my interest in nutrition was ignited. Though what I learnt in school was not enough to solve the problem of obesity, I knew I had started on the right path. When I graduated, I could not work as a Nutritionist because I did not study Nutrition. So, I got a job as a pharmaceutical representative but that was not what I actually wanted to do but I had no choice because of the situation of the country. However, I was able to save enough money to study nutrition and got certified as an integrative nutritionist.

How many years did it take you to solve the problem?

So many things happened. It lasted for up to 15 years. It was in 2015 that I started the practicals with my body by trying to lose a certain amount of kilogramme. I started working out. It was so difficult for me because at that time I had not gone to nutrition school. But, the first time I tried, I was able to actually lose some weight. What I did then was to buy a wedding dress whose the size was very small for me and that was about three months to my wedding. That is one the story that if I  had told anybody then, the person would ask me if I was mad.

How would one buy a wedding dress that is not at all up to one’s size? My mum was like what are you doing? Are you sure you are okay? So, that was how I started the whole thing. So, I was able to drop 10kg. That achievement from the wedding dress was a motivation.

How did the idea of wedding dress come about?

At what point did you get to your desired size?

Hmm! Let me tell you the story.  After my wedding, I got pregnant and I went up to 123kg and that was almost double my size. I didn’t buy any dress to fit my big size. So, it was just the former size that I had except the few ones that I could use for breastfeeding.

I had no choice after my maternity to fit into the clothes I had because the ones I used for breastfeeding were way too big for me and they were definitely not office dresses. Since, they were not looking nice on me,  I had no choice other than to try and fit back into the dresses I had. So, that was the second time that I was forced to lose weight. When I did it the second time, I was almost getting to 30kg, when I discovered that I was pregnant again. So, I went back to another 120kg. I then  discovered that I knew how to lose weight but I didn’t know how to maintain

I was now able to study how to lose weight, how to maintain weight and also how to coach people to do the same thing. That was when I discovered that it did not have to do with diet neither was it something you  have to do temporarily. It is something you need to inculcate into your lifestyle. Instead of just being concerned about how to look good, we should be more concerned about the conditions for optimal health.

So, the knowledge of how to lose weight is putting food on your table?

I have since used my unique coaching technique to impact thousands of women (including men and children) all over the world through consistent nutrition targeted videos on youtube and face group (Women Health First) established in 2018. I am an International author and I have published a  book entitled “Optimize Your Health” where I talked about my weight loss journey and successes with helping others achieve progress with desired weight goal. My passion is to see busy women achieve a body size they only thought existed in their dreams.

How easy has it been for you to  combine your job, home duties and others without one adversely affecting the other?

I have a 9-5 job, I have a family and I also run this business. What keeps me going is the fact that it is my passion. I love to see everyone healthy. With this, I have been able to save my own mother from stroke. Just like I told you that I studied integrative nutrition and it has an overall effect even on your performance. Let me tell you something- at my workplace, my performance was nothing to write home about because I was not always organised. My health was not good considering the fact that I was obese. Whenever I went, people were always like wow and all that. At that time, I wasc not really sure about those who actually like me. But, thank God for  where I am today.

Our clients are the pillars of Mudiz Hair — Faith Osayi