I am not a drunkard, Governor Ikpeazu replies Senator Adeyemi 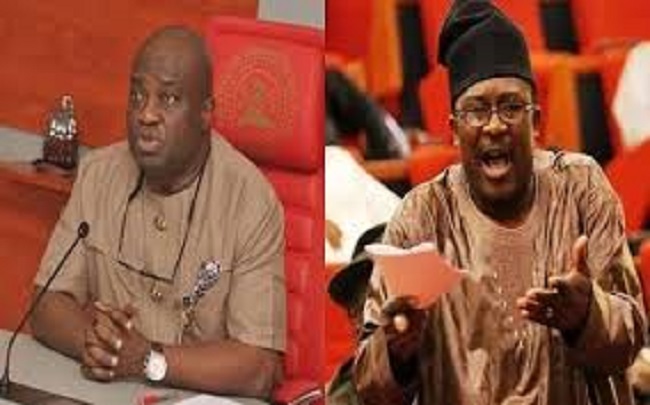 Share
Abia State governor, Okezie Ikpeazu, on Monday responded to the derisive tag as a “champagne drinking man,” by Senator representing Kogi West, Smart Adeyemi.
Tribune Online reports that Senator Adeyemi said leaders in Abia State are governed by drunkard while taking his contribution last week on a motion, ‘Urgent need for the Restoration and Revalidation of the Safe School Initiative in Nigeria,” sponsored by Senator representing Cross Rivers North, Odey Stephen.
He said: “We are bordered by nine states, but we have an experience of the unfortunate incidents that are happening in neighbouring states.
“Some governors are committed to the protection of their people. In my state, the governor awarded contracts for the renovations of schools and provided security services to them.
“In some states where we have highly intelligent people, highly educated people, very enterprising people, like Abia, they are governed by drunkards. The governor of Abia is a champagne drinking man.”
But speaking in Abuja on the occasion of a public presentation of his autobiography, “Made in Aba,” by Senator representing Abia South, Enyinnaya Abaribe, Governor Ikpeazu said he doesn’t drink alcohol.
He lamented that while public figures in other countries are focused on serious issues of development, their counterparts in Nigeria dwell on trivialities.
He said: “I don’t drink (alcohol) and I don’t begrudge those who drink. In other countries where they have less problems than ours, people discuss big issues of economic growth, big issue of infrastructural development. They don’t talk about what people do and what people do not do.
“For us leaders, we ought to be mentors to the young ones. What you say and how you carry yourself, things you say and the time you say them speak a lot about how serious you are as a leader. And that should be the size of my response.
“I will end by quoting what Chinua Achebe said in his book. He said ‘if a mad man picks your cloth while you are in the bathroom and takes off, and you go after him naked, nobody will know who is mad’.”
Former governorship candidate and founder, Centre for Values in Leadership, Professor Pat Utomi, who wrote the foreword for the book, described Senator Abaribe as someone who has distinguished himself as a citizen in public life. He noted that unlike others who alienate themselves from the people they are supposed to serve, Senator Abaribe “is among the few politicians in South-East who is a citizen in public life.”
Former Senate President and Secretary to the Government of the Federation, Anyim Pius Anyim, in his goodwill message, commended the minority leader for devoting time to detail his stewardship in public office.
Anyim who noted that Senator Abaribe has faced many challenges in defence of truth further described him as a man of conviction.
He said: “I got to know him as a deputy governor in Abia. A public life without controversy isn’t complete. There must be a time you will stand out. Abaribe life is one dotted with such.
“A story about Senator Abaribe told by him will be an interesting read. I admire your ability to make a decision and stand by it to the end. If there is anything about him, it must be how he has navigated through his public career. It will inspire me and encourage me to be like you.
Senator Abaribe whose presentation of his autobiography coincided with his 69th birthday said his motive was to document for posterity his stewardship in public office and Nigeria’s promising past to instigate the citizens to remember “some of the good things we have forgotten.”
He said: “I tried to put it down in this book. I tried to capture part of the reasons we are where we are today. I also tried to capture the Nigerian of our past which said though tribe and tongue may differ, in brotherhood we stand.
“Nigeria has regressed and all of us continue to withdraw into our ethnic cocoon. I tried to look at the possibilities of Nigeria.
“Finally, I tried to look at how home training could inform what we become, that we can’t be shaped from outside.”
Former Anambra State governor and vice presidential candidate in 2019 general elections, Peter Obi described Senator Abaribe as a politician worthy of emulation.
“Abaribe represents what a legislator should be globally: a lawmaker, law defender and what we should be in public service: speaking truth to power, especially in a country where saying the truth is an offence.  I know what he goes through but I encourage him to continue to say the truth.”