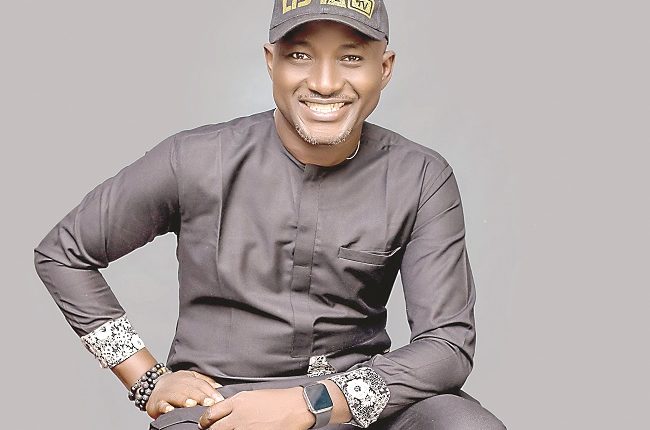 Lekan Wasiudeen is the brains behind Libra TV, an online streaming platform for Nollywood movies and series. ROTIMI IGE caught up with him recently and presents excerpts of their interaction.

I was born in the 70s to a family of seven. I had my primary and secondary education in Lagos. Growing up was fun and blissful; I believe the nation was more peaceful then, there was less acrimony.

I also attended Orisigun High school to later study Electrical Electronics Engineering at Federal Polytechnic and Yaba College of Technology. I have a masters in Personnel Psychology from the University of Ibadan.

I am an IT personnel, movie maker and digital movie distributor.

What influenced your interest in the arts?

Sometime in 2010, I was watching a movie on a popular channel on TV and was appalled by the quality of what was showing on screen. I was angry at first, considering the fact that we have had some of the best in theatre, film and television not long ago.

I actually give kudos to what had been done but then I asked myself what contribution I have made to better the art. So, I made a resolution to contribute positively to the industry’s growth and to influence the field of play. We can only make changes by getting involved.

How/when did you start making movies?

Like every venture, before you can make any meaningful impact one must seek considerable knowledge of the venture. So I set out to learn movie making but couldn’t go to film school as many of good ones were so expensive and required a lot of time and travel. I couldn’t also learn from the industry I intended to influence. So I was left with just an option, learn from the internet.

I downloaded lots of ‘how to’ videos, tutorials and other materials from the internet to learn a chunk of everything about movie making, from pre-production to post production.

Because we also just entered the era of digital filmmaking, I leveraged on the new technology by learning everything about some new, small, relatively cheaper but super effective means of creating amazing contents. The machine power that were hitherto in the hands of certain professionals and film makers were made available to many that could take advantage of them. The movie making scene hasn’t been the same since the advent of this highly effective electronic ‘toys’.

I was doing a minimum of nine hours of study daily (weekend inclusive) for the first three years. At a point I became so addicted to the study and overstretched myself.  It was a wonderful experience and beautiful world. I set a curriculum and pursued it vigorously, with intermittent field works.

After first three years of study, I decided it was time for my impact in the Yoruba movie industry particularly. I wanted to do an evaluation of what plays in there with the knowledge I had acquired, see what they were doing well and where intervention was needed to better the trade and output. This opened me up to so many things.

I made my first movie in 2015 titled ‘Boomerang’ (collaborative effort), starring Muyiwa Ademola, Jaiye Kuti, Lateef Adedimeji and many more. I have not looked back since.

What challenges did you face?

Oh! There were numerous challenges. Firstly, because of the time I dedicated to my new addiction many things around me suffered; family to business and relationships. To make matters worse, this addiction brought forth nothing in the first four years or so. I was just putting all I had into it. It was like a wasteful venture in terms of money, time and commitment. It was the most turbulent period of my life. I was almost a wreck financially and psychologically but I was highly hopeful. I strongly felt all my work won’t go to waste. Thank God it didn’t. Thanks to close family and friends too who made that period bearable.

Secondly, convincing the people in the industry of newer and better ways of doing things was so difficult. There is always this look of ‘who are you’? I had no film school appendage to my name.So I resolved that the best way to show them ‘how’ was to do it myself knowing that when they see the results, I was sure, questions would be asked. So I had to put my resources where my mouth was.

Thirdly, as a business person, I had to follow the money and its flow before making the final commitment (making a wrong financial decision would be suicidal). What I saw was very discouraging, that’s to put it mildly; so lopsided, non-progressive and very unsustainable. There was no room at all for the future in the scheme of things.

Lastly, sales channels were bottle necks, lots of contents with very minimal options of where to sell to.

You own a streaming service, LibraTv. How did that come about?

Knowing he who controls sales controls the lever of business.  I reckoned if I was to make any impact on the scheme of things in the industry, I must have a say in sales and distribution. That was very difficult as the traditional distribution channel was highly saturated and very difficult to penetrate.

With my ICT background I saw an opening in digital distribution and quickly latched on to it and that gave birth to LibraTv. Before LibraTv, movies were mainly captured in HD and downgraded to SD at delivery, but we have been able to standardise delivery to HD and we have gone further to capture and deliver in UHD. We pride ourselves as the only YouTube channel to deliver Nigerian content in UHD 4k format.

How easy has it been sourcing movies for the platform and paying royalties etc. to contributors?

It is very easy for us because we are known for quality and transparency. Those are the first two attributes that come with our name and this has really helped. Your brand is what people say you are.

The new National Bureau of Communication code on content exclusivity; what is your take on it?

NBC as a government agency has the responsibility of acting in the interest of majority of Nigerians, making sure they are protected and get value for money. Content distributors, on the other hand, also love to create an environment where there is competition in terms of quality delivery and return for their huge investments. I am sure when all stakeholders sit, the gray areas in the new code will be ironed out and all sides will be happy.

You have a new movie in the works. Tell us about it?

Yes, we are excited about some of our latest productions. A movie titled ‘Abaadi’ is our latest creation. We have merged our heritage and our modern-day realities. We showcased the richness of Yoruba language in a contemporary costume and modern-day setting. We have it this way to correct the illusion that you can only speak pure Yoruba when you are gabbed in old costume; you can look hip and speak pure Yoruba. This is our own way of protecting our language from going into extinction. If the language can survive, other components of the culture will be revived.

We are also about wrapping post production work on our 26 episodes TV series titled ‘Okoto’. This is the first time we are doing a TV series, and we embarked on the project so as to present good quality series, that has something to offer across all demography.

‘Okoto’ is a millennial driven drama that tells the story of how life affects us, our dreams and plans, how life spins like an ‘Okoto’, leaving us to deal with the change; how everything in life is like a game where you either win or lose and just how we are much more connected than we think. ‘Okoto’ is going to be released on our platform soon.

What are your plans for the next five years?

We hope to be able to have a dedicated HD cable TV channel for our contents.

What other projects are you involved in?

With our rich and modern production units, we also shoot TV and web commercials for companies and organisations.

Many streaming platforms are investing in series/drama. Any plans for this?

Yes, ‘Okoto’ is the first of many more series to come from us.

As Nigeria celebrates its 60th Independence Anniversary, Most Reverend Emmanuel Adetoyese Badejo, the Bishop, Catholic Diocese of Oyo in his message on the occasion…I am in Nollywood  I am in Nollywood