I always find it hard to see myself as a comedian —Adedayo, Mr Macaroni

Debo Adedayo, popularly known as Mr Macaroni, is an actor and an online comedian who is currently making waves in the entertainment industry. In his interview with FAITH ADEOYE, he talks about his career among other issues. Excerpts: 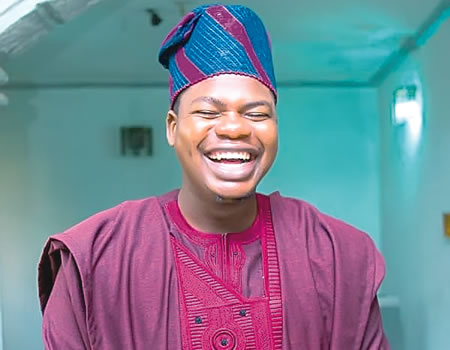 Who is Mr Macaroni?

I’m an actor, performer and producer of movies, TV, stage, radio and online media. I am an MC, entertainer and a complete thespian. I pride myself as an advocate of love, truth and justice.

Mostly, what people don’t know about me is that I am a virgin (laughs). I believe in God and the idea that only love can make the world go round. I like to spread love and I do not like to see people cheated.

Growing up was sweet. I was/still a mummy’s boy. I am the last born, so it is understandable.

I grew up jovial and highly expressive. I wanted to be a pastor. I liked their charisma and the sublime way in which they use to deliver their messages. Pastor Chris Oyakhilome was my major muse. Every other day, I would mimic him and tell everyone that I wanted to be a pastor. That was how I think my acting experience began. Because I would go about mimicking everyone and light up everywhere I was.

Why did you leave movies and soap opera for comedy?

I haven’t left. I’m still fully involved. I just finished a big cinema job a few weeks back and I have been on some movie sets recently.

What I just discovered was that online media is the new thing. People can make videos in the comfort of their homes or wherever and before you know it, they have become a big deal. So, instead of waiting all the time to be called for movie or TV series job, I told myself why not just start something for yourself and see how far that leads you.

A real actor/performer lives in a world of his art; it can be depressing if there is no way to express that art. I just wanted to find a way of expressing my art without waiting to be called for jobs.

At what point did you discover that you can become popular as an online comedian?

Honestly, it never really occurred to me that way you put it. I always say to myself that by God’s grace, I would be great and that I would attain the heights that I wanted to and even beyond, I knew it was just time.

I didn’t know it would come as an ‘online comedian’ as you see it. In fact, when people call me a comedian, I laugh because when you say comedian, the people that come to mind are the likes of BasketMouth, Bovi, Seyi Law and co. I see myself as an actor/performer.

So, I guess it is in my interpretation of the character that people have created a comedian out of me or perhaps I created the comedian in myself.

You are becoming very popular in the industry, how were you able to do that?

Haaa! Na God ooo!! (Laughs)  Honestly, like I said, I believe I am destined for greatness. All is time as I always say. I think God’s grace and blessings are in my work.

Also, you know how it can be to create content and art and there is no one to appreciate it. Tunde Ednut suddenly picked interest in me, and he began to promote my works on his brand. That gave me a wide range of audience and it has been growing bigger and better by God’s grace.

In your comedy skits, you play the role of a sugar daddy, why did you choose that role?

It’s a satire. It is a representation of a good percentage of men in the society who are naughty and can’t really control themselves. What I do is to use that character to tell not only the stories of some men but of women also, boys and girls, depicting the lifestyle of lack of control and display of bad behaviour, in different aspects of our lives. I always try to pass across a message in my works.

There are a lot of comedians who do skits on social media, how do you intend to stay on top of your game?

The top of my game is to be ahead of my last game, not the games of others. My major concern is to do better than the last I did. When I wake up every morning, my prayer is to be better than I was the previous day.

Do you see them as a competition?

Never! They are motivation to me. When I see something I like, I commend it. As a thespian, I am never weary of appreciating good works of art.

Are you going back to acting movies and soap opera?

I never left. It’s just that the online media is really changing things for me. I am getting more buzz, business and other juicy stuff. I am definitely still open to jobs for screen and stage.

What are some of the challenges you have faced?

Finance. When I release my videos people always say nice content, amazing quality and all of that. Coming from the TV/Film world and as a trained theatre artist, I always want the presentation of my art to be as beautiful as possible.

Online media is powerful and people from different parts of the world are seeing your works. So, I try to deliver top notch. Edem Victor who is one of the best around shoots my job with his crew. I also pay every members of the cast that features in any of my videos because I believe it is the right thing to do. I use locations, props, etc and all these cost money.

If the trend of comedy doesn’t last for another five years, what other plans do you have to still be on top of the game?

I’m all about art and performance. I plan to also inculcate other production patterns, creating a TV series and other programmes that can give viewers a wide range of contents to enjoy.

How did you come up with the terms you use like ‘you are doing well’ and ‘fantabulous’?

You know how adults or people that want to help you always say ‘keep it up’ ‘you will get there’ ‘you are doing well’, I am fond of teasing my friends like that, as if I want to help their careers (laughs).

Also, Destalker shared a joke about how one big man in Abuja kept saying to him, you are doing well and eventually scammed him. So, that’s the idea. When some of our daddies want to engage in bad behaviour they still have a sweet way of going about it.  I don’t even know how Fantabulous came to my head.

Why did you leave law for creative arts?

I don’t like to see people being cheated. I like to stand up for people. This influenced my decision to study law. My parents also advised that it would be nice to have a law degree.

But studying law made me more confrontational, highly opinionated and somewhat aggressive in expressing my views. The energy was too much and was putting me in some kind of trouble so I decided to go back to my first and one true love: Theater.

What do you think of your career in the next few years?

A force to reckon with, by God’s good grace.

I have gone through so much in life and to have overcome at every point, I know and always believe I am made for greatness. Seeing successful people drives me and the thought of wanting to be a better person for myself and for my family.

How was your life in Redeemers University and how were you able to sort the issue you had with them in your final year?

Redeemer’s University and I are now good friends. I practically lived my life then, for the university. I was bent on leaving a legacy in the University, one that would make every student an ambassador of the university, which can only happen when students find love and pride in their school. There is no better strategy, no better advert.

As president of the student body, I always tried to make sure that every student was happy and comfortable. That at the time meant everything to me. The issue as I always say should never have escalated to that level. Thankfully, we were able to settle the case out of court and even on a personal note. I have since received my certificate and I am currently serving. I was at the school sometime last year to perform with my theatre troupe, so all is definitely well.

My husband hit me on the head with iron rod for denying him sex, woman tells court