Brands and Marketing
By Tribune Online On Feb 10, 2020 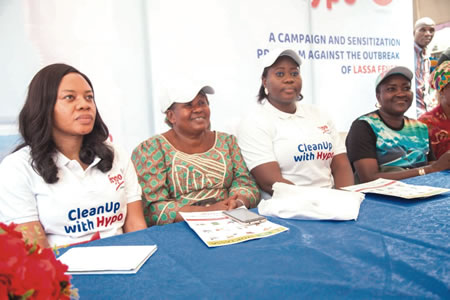 Hypo, makers of Nigeria’s famous bleach product, has formally launched a nationwide Sanitization campaign in open markets to curb the prevalence of Lassa fever, especially in areas mostly affected by the plague in  Nigeria.

The Sanitization Campaign, which is  in collaboration with the Nigeria Centre for Disease Control (NCDC), will see the Hypo Team visit major open markets across 11 states in the country, with the aim of  enlightening market women and the entire public on the Lassa fever epidemic and steps to keep their environment clean.

Nigeria has registered an upsurge in the number of Lassa Fever cases since the beginning of the year, with 365 positive cases and 47 deaths reported from 23 states across the country.

Speaking at Oke Arin Market,  Brand Manager Hypo Bleach, Ms. Omotunde Bamigbaiye said the need to embark on that type  of campaign  had become imperative since women remain the custodians of the family and managers of house affairs, thereby making catching up with them at the market square a strategic touch point to disseminate the message.

“It is not just coincidental that Hypo Sanitization Campaign against Lassa is officially launched in two cities on Thursday; since Thursdays have been earmarked specially for environmental sanitation exercise across most major open markets in Nigeria.

“The idea is to have the public incorporate effective sanitization approach into their regular cleaning while at the same time take them through step by step processes to prevent the spread of Lassa fever both at their shops and at home” she said.